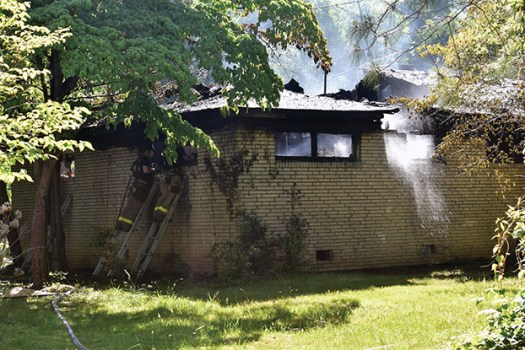 Firefighters continued to extinguish hotspots and flare ups after knocking down the fire. Ben Stansell/Salisbury Post 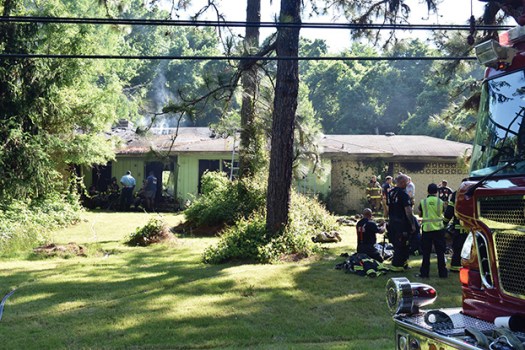 Firefighters regroup after putting out a blaze that severely damaged a home on Milford Hills Road. Two searches of the home revelead no occupants. Ben Stansell/Salisbury Post

SALISBURY — Ryan Thomas was driving on Brenner Avenue shortly after 8 a.m. Tuesday when he saw a plume of smoke billowing into the sky.

Instinctively, Thomas turned off of Brenner Avenue and drove toward the source of the haze. After seeing a house in the 500 block of Milford Hills Road on fire, he hopped out of his truck and dialed 911. Soon, the street was covered in flashing red lights as firefighters aggressively worked to put out the flames.

Salisbury and Locke were the primary departments that responded.

“They had heavy fire involvement on arrival,” said David Morris, chief of operations for the Salisbury Fire Department. “The fire was on the first floor and had extended into the attic, so they immediately began offensive operations, extinguishing fire, searching the building for occupants, and ventilating the structure.”

Traffic on Brenner Avenue near Milford Hills Road was completely stopped while crews worked to get the fire under control. Salisbury Police officers and Rowan County Emergency Services were on site as well.

No occupants were found after a primary and secondary search of the one-story, brick veneer home.

“The house does appear to be vacant,” Morris said.

Firefighters had a bulk of the fire knocked down within roughly 15 minutes. The blaze was completely under control in about 45 minutes, but crews continued to search for hotspots and extinguish any flare ups.

“The first arriving crews did an outstanding job,” Morris said. “I can’t say enough about the work and the dedication of the Salisbury firefighters and surrounding departments that helped us.”

No firefighters were injured during efforts to put out the blaze.

The fire is currently under investigation by the fire marshal. It’s not clear what started the blaze.

There was extensive damage throughout the house. The fire spread rapidly throughout the structure once it got into the building’s common attic, Morris said.

Morris said he was thankful for surrounding departments who were on standby to cover parts of Salisbury as the city’s department worked the Milford Hills Road fire.