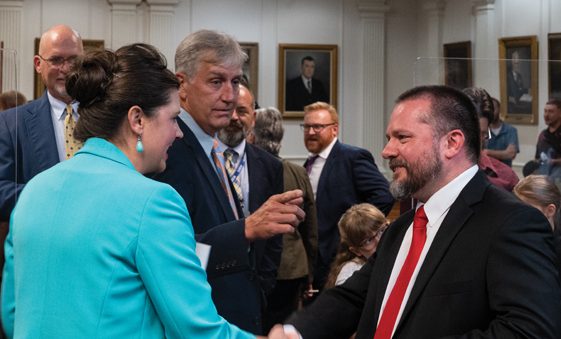 SALISBURY — Current Rowan County District Attorney Brandy Cook easily fended off a challenge from former Assistant District Attorney Paxton Butler in Tuesday’s primary and is expected to return as DA for a fourth term, since she is unopposed in the general election.

Cook was the first woman elected by the county to serve as district attorney in 2010, then was re-elected again in 2014 and 2018. Butler worked as an assistant district attorney in Rowan County from 2008 until 2021, leaving last year over what he said was frustration with efforts to reduce crime and high turnover in the office.

Butler campaigned on harsher penalties for violent offenders, speeding up trials, taking a proactive approach to child predators and giving second chances to youthful, first-time offenders. He criticized Cook for participating in the federal program Project Safe Neighborhoods, saying it slowed down the judicial process. The program, established in 2001, involves federal, state and local law enforcement officials, prosecutors, community leaders putting their heads together to determine a community’s most pressing violent crime problems and then developing ways to address them. Cook has said the program has a proven track record and she is confident it will continue to benefit the community.

An examination of campaign finance reports with the North Carolina Board of Elections recently showed Butler had apparently not filed the necessary organizational disclosure reports indicating how his campaign was funded, nor had he filed his year-end semi-annual report for 2021. The Board of Elections sent Butler a notice last July warning him of one of the missing reports. Calls to his campaign regarding the missing information were not returned.

Cook says she continues to be focused on building relationships between law enforcement agencies and the community, working to protect children, targeting habitual and repeat offenders, and promoting effective case management to reduce prosecution and trial time for criminal cases.