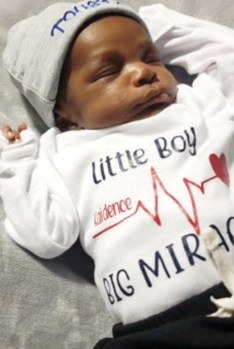 New parents LaShonda Harris and Eric McCluney delight in their son, Kaidence, who was born with congenital heart disease and who needs a high calorie, hypo-allergenic baby formula available 24 hours in order to sustain enough weight to safely have open heart surgery to repair holes in his heart. Submitted 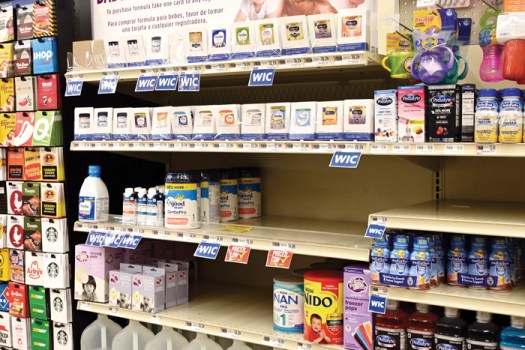 Shelves in a local Food Lion indicate the lack of available formula, and employees noted that the paper tabs on the top shelf that consumers typically bring to the register to purchase the formula are currently useless, as they are entirely out of stock. Elisabeth Strillacci 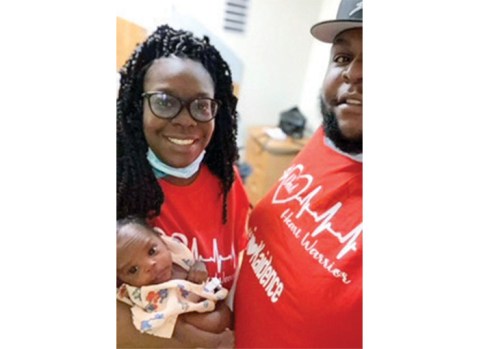 At birth, Kaidence McCluney weighed just shy of six pounds. In the five months since, his weight has only grown to 11 pounds and doctors want him to gain more weight before another open heart surgery he will need in the coming months. Submitted

SALISBURY — When Lashonda Harris and Eric McCluney found out they were expecting, they thought of the things most first-time parents do — clothes, baby furniture, how to care for an infant — but their son Kaidence was born with three holes in his heart, and at 10 days of age, had his first heart surgery, and all the normal considerations were out the door.

Kaidence, who was born Dec. 6, 2021, is now five months old. Diagnosed with Congenital Heart Disease (CHD),  he will need open heart surgery to actually close two of the holes in his heart. Before surgeons are ready to perform the surgery, they’d like Kaidence to put on a bit more weight than his current 11 pounds.

But the FDA’s shutdown of Abbott Nutrition, one of the country’s four largest manufacturer of baby formula, and the ensuing ongoing shortage of infant formula is presenting a drastic challenge for Kaidence and his ability to gain the necessary weight.

Since birth, he has struggled to take in enough breast milk and formula to sustain a healthy weight just by nursing, because he struggles to breathe, and it gets worse when he has to eat.

“It got to the point that between his breathing issues and the energy it took for him to eat, he was losing weight,” Harris. “So they put him on a feeding tube and we have to use high calorie, high protein, hypo-allergenic formula that we can only get through a pharmacy. And we need to have formula going in 24 hours a day.”

Harris said when the first formula recall hit in February, her son was on the formula Elecare, made by Abbott. They were able to switch to PurAmino, made by Mead Johnson, another of the four largest companies, but she said they seem to produce it in smaller quantities because it is such a specialized product. The other top production companies are Gerber and Perrigo, but it seems they have not been able to bridge the gap as yet.

“We’ve been told that yes, there are these options, but the production is much smaller and the companies are struggling to meet the demand,” said Harris.

Right now, Kaidence uses about one and a half canisters of the powdered formula a week. The couple has four canisters left, and their pharmacist has informed them she has one can left, and after that, she does not know when she will be able to get more.

“That means we have a one month supply,” said Harris.

In addition to the difficulty in getting the formula, Harris points out that the price is another challenge. It can run $55-$60 a canister, and you have to add shipping. People have told us to change our Amazon account to Canada to get it, but it said shipping is not available to us here. A woman in a Facebook group I am in managed to get one can sent to her in New York, but the shipping was as much as the can, so she paid $100 for one can of formula. There is no way we could afford that.”

Harris is a stay-at-home mom to provide the care Kaidence needs, and said she and McCluney are currently saving for a one-month stay in Charlotte at Levine’s Children’s Hospital when Kaidence has his next surgery. McCluney, a local rap artist also known as Eric Trilly, is every bit as worried as she is, said Harris, but they are leaning on one another.

“A lot of parents are saving for the next family trip, or braces, or expenses down the line for their children,” she said, “and here we are saving for medical trips and not knowing where we are going to find food for our baby. It’s really, really scary.”

Harris has joined a number of online groups to try to find connections to get the formula her son needs, and once in a while, she finds another mother willing to share.

“I feel guilty sometimes,” she said. “I am going to do whatever I need to do for the health of my child, but sometimes I do feel guilty, because I wonder if I’m taking it from another child in need.” Harris does pump her own breast milk in addition to using formula, but says there is no way she can keep up with 24-hour feeding.

“There are lots of people looking out for us,” she noted, including representatives from the Health Department and even WIC, (a federal program for women, infants and children), and a former classmate messaged her that he was purchasing and sending a can. Harris said she even tried to see if Kaidence could possibly be ready for the simplest of baby foods just as a backup, but he’s not ready.

“Those were the worst five days ever, when the recall happened, because we were not prepared at all,” she said. “As a parent, what are your options when your child needs a specific formula to keep him healthy and alive and suddenly it’s not available?”

At the end of the day Monday, Abbott did announce it had reached an agreement with the FDA on a consent decree that, if approved by the court, could allow the plant to reopen in as little as two weeks, but it would be six to eight weeks before product would begin to hit shelves. The consent decree outlines changes Abbott would have to make in order to bring the plant into compliance.

Meanwhile, until something actually changes, life is still anxious for Harris, McCluney and Kaidence, their first and only child.

“I will tell you this. I will not sit by and watch my child starve,” she said. “If all else fails, I will take him to the hospital and tell them they have to figure this out.”