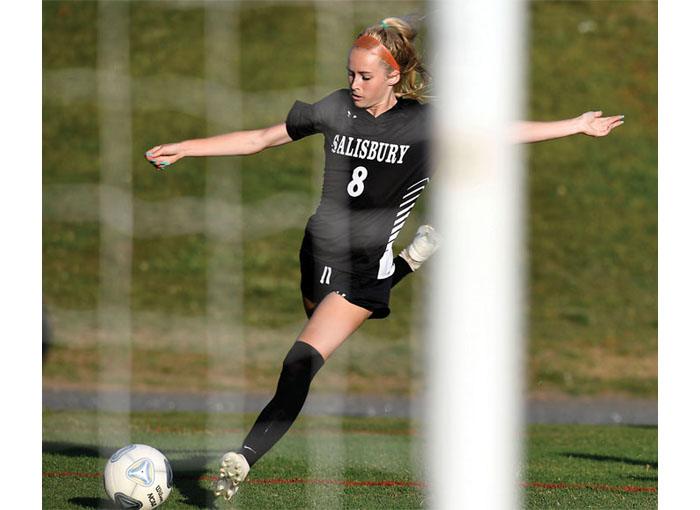 Salisbury's Sutton Webb 8 aiming for the goal. She scored 4 goals in the game. photo by Wayne Hinshaw, for the Salisbury Post

SALISBURY — The first one went down easy.

“We’re definitely in a good spot right now,” Georgia-bound forward Sutton Webb said, moments after Salisbury (17-1-2) earned a second-round match at East Gaston on Thursday. “We’ve given ourselves a shot to win in the next round.”

It was Webb — the Hornets’ beating heart both with and without the ball — who provided the mojo and on-field leadership Salisbury needed to sideswipe East Surry (11-7-2), a 21st seed out of the Foothills Conference. She contributed four goals and an assist as SHS secured its sixth consecutive win.

“She’s very smooth,” losing coach William Hart acknowledged after Webb boosted her season total to 55 goals and her career mark to 137. “She’s one of those players that every coach likes. She doesn’t do one or two things particularly phenomenal. She just does everything very, very well.”

Salisbury coach Matt Parrish quickly agreed. “No doubt,” he said. “We go as she goes.”

Salisbury opened the match playing a cautious brand of soccer before erupting for four goals in less than 20 minutes. Webb got the party started at 3:45, when teammate Izzy Banish threaded a seam pass her way and she buried a shot past East Surry keeper Katie Collins. The early score seemed to have a calming effect on the Hornets, who had little prep time after learning their first-round playoff opponent late last Friday.

“I’m proud of this,” senior midfielder Sydney Hlavacek said after collecting three assists. “If we keep playing like we know we can, we’ll continue to play on. I think 6-1 shows how we played tonight.”

“The first goal really picked us up,” added junior Kyna Zaldivar. “We were just in the right place at the right time.”

It was 2-0 midway through the first half after Webb’s scalding, clothesline shot from a sharp angle on the left side deflected through Collins’ hands and bunny-hopped over the goal line. Five minutes later, Zaldivar stole the ball from a defender and slid a pass to freshman teammate Angelee Garcia for a highlight-reel goal and a 3-0 Salisbury advantage. Then with 16:25 remaining in the half, reserve Parker Jennings scored off a giveaway, providing a four-goal lead.

“It settled the nerves quickly,” Parrish noted. “As opposed to being really tight at the beginning and having nothing to show for it, we realized what we had to do to be successful. It gave us a nice cushion and put all the pressure on them.”

Salisbury, owner of 11 shutouts this season, narrowly missed recording its 12th when East Surry’s Addison Goins beat senior keeper Hannah Schmeltzer with 5:13 remaining in the opening half. It did little to sour the scrub-board clean performance turned in by the Hornets’ defense and midfield, a group comprised of Hlavacek, Zaldivar, Banish and fullbacks Sage Huffman and Stella Koontz.

“Stellar. Probably the best we’ve been all year,” Parrish said. “We were most worried about No. 11 (East forward Liannette Chavez). She’s very much the table-setter, but there were times today when she faltered a little bit. Of course, we had something to do with that.”

Webb explained that East Surry tried to work the ball to emerging attackers on the wings, with only marginal success. “They liked to go wide,” she said. “Whereas other teams in our conference come at you right down the middle.”

Webb added a pair of second-half goals, both on short-range punch-ins from the right half. When it ended, the Hornets didn’t burst into celebration or raise their voices. They simply congratulated their opponent and began thinking about Round 2 — fitting for a 12th seed that has played above and beyond for much of the spring.

“Yeah, we’re the 12. That’s a good thing,” Hlavacek said with a post-game grin. “That makes us kind of a secret. like a hidden weapon.”

For now, it gets them into the second round.