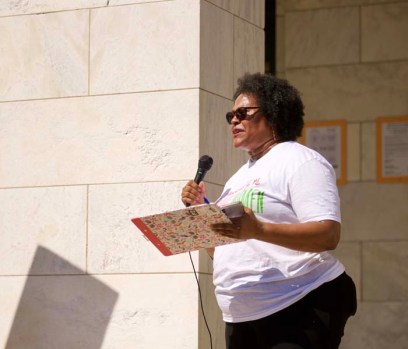 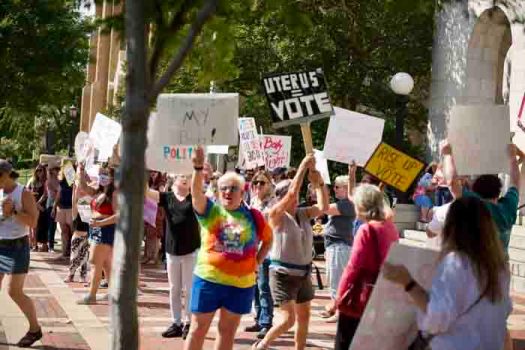 SALISBURY — Demonstrators gathered at the steps of the Rowan County Administration Building on Saturday afternoon to show support for abortion rights.

Many of those driving by on Innes Street honked in solidarity as they passed the group, with the occasional heckler voicing opposition as well. The organizers had speakers lined up to talk about the issue that has been thrust into national headlines since the leak of a draft Supreme Court opinion that would overturn the Roe v. Wade decision that guaranteed the right to an abortion in 1973.

An earlier protest about the issue was held on May 4 in front of the Rowan County Courthouse. Saturday’s crowd arrived with signs and gathered at the steps of the building to listen to the speakers.

“Everybody said, ‘No no no, Roe is solidified. Roe is part of our cultural experience as Americans.’ And here were are today,” Redmond said. “And we’re loud, and we’re going to be loud and we’re going to keep being loud until we know that Roe is with us and our daughters and our granddaughters.”

“But let’s be clear, the loss of a right to a safe abortion is the gateway to the loss of other rights we enjoy in America. Do you hear me?” Heggins said.

Mary Walker took the mic after Heggins and started by leading the group in a chant that generated a few supportive honks from the road.

Walker said women should be protected from unplanned pregnancies resulting from traumatic events and failed birth control, reiterating that some states are prepared to block access to reproductive care for women.

“We need to make sure reproductive health care, which includes legal abortions, is accessible, affordable and not parked by shame,” Walker said.

Shakeisha Gray, a Unitarian Universalist minister, told the crowd she attended in a professional capacity and as someone whose family would be affected by the decision.

She quoted the denomination’s president and said the decision would limit the rights of women, particularly indigenous people, people of color, poor people and people in rural areas.

“The choice isn’t always easy, but it is allowed,” Gray said.

Candy Torres voiced her support for legal abortion in both Spanish and English.

Bob Johnson, a social studies teacher at Carson High School, was asked to speak and said he questioned why the group would want to hear about abortion issues from a white man. But Heggins asked him to speak.

“When Al asks you to do something, you say yes,” Johnson said.

Johnson said he has been teaching the constitutional right to choose an abortion for the past 15 years, but now he is not sure what to tell his students.

“Our rights are threatened,” Johnson said.

He said he is amazed at what children have internalized about gender roles.

“They are watching,” Johnson said. “Our young people are watching us. And that’s why, if this ruling becomes the new law, our next two elections in North Carolina are so vitally important.”

Johnson warned if the same people are elected this fall there will be a push to write a law to ban abortion in North Carolina. He said women’s rights could be set back 50 years.

“We can forge a different reality because North Carolina is not a radically conservative place,” Johnson said, adding the state is full of people that support women’s rights.

After the planned speakers, political candidates who attended were allowed to speak, as others who had gathered. Democratic candidate for sheriff Carlton Killian attended, along with U.S. House candidate Scott Huffman and state Senate candidate Tangela Morgan.

One Salisbury High School student questioned why politicians seem concerned with children who have not been born, but not those who go to her school when it is locked down due to violence or her classmates are unable to pay for lunch.

Mayor Pro Tem Tamara Sheffield was also among those who spoke.