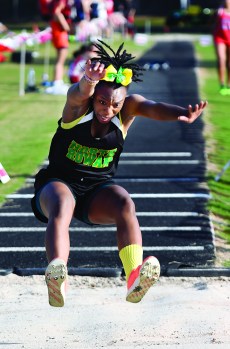 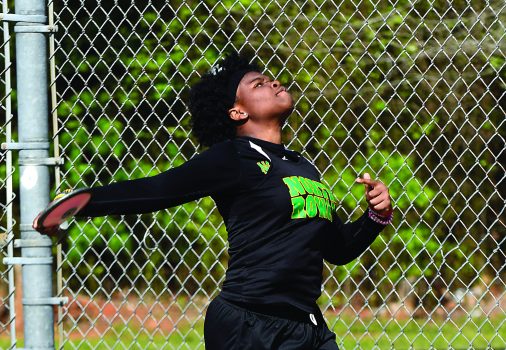 North Rowan’s Brittany Ellis won the shot and the discus in four straight competitions, including the 1A state meet. File photo by Wayne Hinshaw, for the Salisbury Post 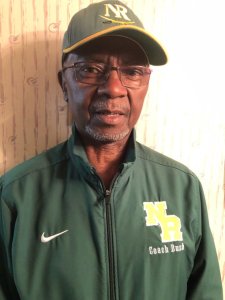 SPENCER — North Rowan’s girls track team won the 1A Midwest Regional last June — and then finished 11th in the state.

It was sort of like returning a kickoff 98 yards and fumbling on the 1-yard line.

North repeated as regional champs on Friday in a meet hosted by Davie County, and the Cavaliers plan to do a whole lot better than 11th in the upcoming 1A State Championships at North Carolina A&T. They’re looking for the end zone this time.

“There are some great teams out there, and I don’t know if we can win state, but I do believe we have a shot at it,”  North coach Phillip Bush said. “I do think we are one of the best teams.”

North Rowan’s team is basically sophomores who have matured some since they were really young in 2021.

“Young people make youthful mistakes,” Bush said. “Tai’lah Ward would have won the 300 hurdles at state, but she got out of her lane and got a DQ. She didn’t interfere with any of the other runners, but she did get our of her lane. Lesson learned. These girls are more experienced now.”

If you’re wondering how a team that finished fourth in the county and third in the conference can win a regional and entertain state-championship hopes and dreams, the  key factor in conference and county meets is usually numbers. If a school can put three people in every event those points for fourth, fifth and sixth add up over the course of a long day.

North can’t score like that. North doesn’t have numbers. When the Cavaliers get on the bus, there’s plenty of room.  There’s only 11 of them. Well, 12 if you count Bush.

What North does have is special girls, athletes who are elite or on the brink of getting there. These are the sort of people who can win a state championship because they’re going to keep right on getting firsts, seconds and thirds, even when the level of competition peaks.

North got zero distance points in Friday’s regional but those 800, 1600, 3200 and 4×800 points that can kill the Cavaliers in a meet with six or seven teams get really divided up in a vast meet the size of the state. Forty-five different schools scored in the 2021 girls 1A State Championships.

North amassed 109 points in Saturday’s regional, and while points will come harder in the state meet, it’s not hard to visualize the Cavaliers getting into that 52 to 78 range because they have three people who will be threats to win multiple events — and they have solid relays.

Bush is passing on knowledge acquired from a long association with North track and field legend Robert Steele.

“Everything I know I learned from Coach Steele and I try to give those things to these girls,” Bush said. “They make it fun to be around them. They work hard. They don’t complain. They make the honor roll, and those good grades mean everything. They’ve got the talent to keep going with track, and as long as they make the grades, they’ll get an opportunity.”

Ward missed the county meet, learning another youthful lesson. Had she been there, she would have dramatically impacted all four events in which she was entered. In Friday’s regional, she won both hurdling events, placed third in the 100 meters and helped put the 4×100 relay team in the winner’s circle.

Aniya Brown, who finished second in two events in the 2021 1A State Championships, is equally devastating. She matched Ward’s 26 individual points in the regional, winning the triple jump and running second to Ward in both hurdling events. Brown also helped make the 4×200 relay team a winner.

Brittany Ellis, who placed third in the shot put in the 2021 state meet, is throwing about 3 feet further now. She won the shot and the discus in the regional for the second straight season.

Top-four finishers in the regional advance to the state event. North qualified a lot of people. Freshman Jade Sankey was third in the long jump. Azarea Miller provided the bronze medal part of North’s 1-2-3 regional dominance in the 100 hurdles. North got 42 of its 109 points in the hurdles.

Miller also factored on two first-place relay teams, while the Goodlett twins, Bailee and Bloom, also had strong days in the relays. Both ran on the 4×100 and 4×200 winners.

North even qualified the 4×400 team with a fourth-place finish. Bush smiled at that one.

The last state championship for North’s girls came in 2010. This group should have a chance for the next two seasons, as well as this one.

Gray Stone’s girls placed sixth in the 1A Midwest Regional. The Knights had quite a few state qualifiers.

Pharrell Hailey won the discus and was also a state qualifier in the shot put with a third-place finish.

Kemon O’Kelly had a third in the high jump and ran on both qualifying relay teams.

In the 3A Midwest Regional, also held at Davie on Friday, South Rowan’s Macy Miller won the high jump, clearing the bar at 5 feet, 4 inches.

West Rowan’s Katie Roberts qualified with third place in the 3200. East Rowan’s Peyton Whicker moved on to the state meet with a third-place finish in the 300 hurdles and helped the Mustangs score 28 points for ninth place.

Marcus Holloman was fourth in the high jump to advance to the state competition.

East Rowan’s boys scored 30 points and finished ninth. Qualifying for the state meet were Cole Eagle, second in the long jump, and Luke Heglar, third in the pole vault.

In Friday’s 2A Midwest Regional in High Point, Salisbury’s boys scored 34 points for eighth place. Marcus Cook was second in the triple jump, while Jayden Gibson took third in the 100, and Jalyn Smith got third in the 200. Three relays scored points for the Hornets, with the 4×400 relay team placing third.

Salisbury’s girls scored 37 points for eighth place, with Sutton Webb placing second in the 800 and 1600. 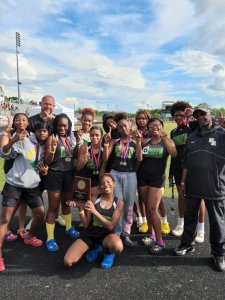