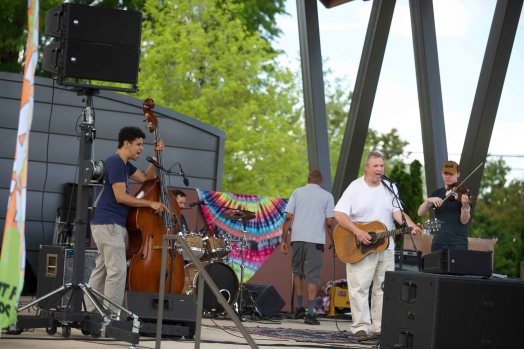 Carl Blankenship/Salisbury Post - Dave Childers and the Serpents playing on the main stage.

Carl Blankenship/Salisbury Post - Kids play with a bubble artist's work on the Bell Tower Green lawn. The vendors lined the outside of the park. 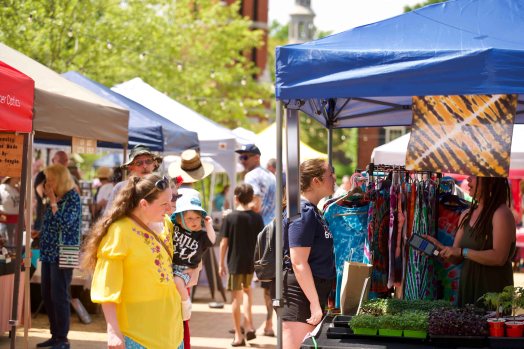 SALISBURY — Bell Tower Green was taken over by crowds on Saturday to benefit a local nonprofit with green goals of its own.

Happy Roots’ Earth Day Jam was on hiatus for the past two years of the COVID-19 pandemic, but with activities reopened across the state and a new venue in the middle of downtown Salisbury, the signature fundraiser is back.

In the past, the event has been a two-day event with camping options available on a local farm, but Happy Roots Executive Director Ashley Honbarrier said this is the first year it is a free event held downtown and she thinks this model has a larger draw.

“We’ve got our regular people and people just seeing it and walking up,” Honbarrier said.

Nearly 60 sponsors with 60 booths and 20 bands filled the area between a main stage and smaller one that highlighted younger artists.

About 50 volunteers pitched in for the event and Honbarrier said the organization is looking for more.

She said in the past, the gardening nonprofit has taken in about $4,000. This year’s goal was $15,000. The final amount hasn’t been totaled, but the money will help sustain programs and go to more schools throughout the year.

The nonprofit is a volunteer organization that creates and teaches gardening skills in local students. Officials are awaiting the results of an application for a grant from the Z. Smith Reynolds Foundation that would provide funding to hire staff members.

Henderson Independent School, the first school the organization worked with, had its own booth on site with shirts and products designed by students.

Henderson Principal Alexis Cowan said the school started using Happy Roots for the therapeutic benefits of gardening and said the partnership with the school’s greenhouse has been a powerful partnership over the years.

Cowan credited the school’s career and technical education teachers for getting students involved in the event on different levels from planning to marketing, design and creating crafts.

Cowan said the partnership helps the school give its students the practical ability to grow their own food and reap the therapeutic benefits for the rest of their lives.

Henderson senior Lamon’Te Lyerly said he has been promoting his school and helping the culinary program at another school as well.

Lyerly said he helps at the greenhouse and the program has had a therapeutic impact on him. He said gardening has made him want to take on healthier habits like drinking more water. Before he got involved in the program he had never tried a fresh tomato chutney or prepared vegetables he grew himself.

Happy Roots got some help from a notable gardener a few states north, too. Tony Hillery made the trip from New York City to read stories on the small stage and occasionally play presenter. Hillery is founder of the nonprofit Harlem Grown.

He started volunteering at a school and saw the need in his own community firsthand, inspiring him to start Harlem Grown.

Hillery was featured on social media pages and has published a book. Hillery said Honbarrier was using the book and he looks at the work Happy Roots is doing as the beginning stages of what he started a decade ago.

Hillery found out about the program in Rowan County and reached out to Honbarrier to offer his support personally. He said he supports other organizations with the goal of bringing extra attention to them.

“Local people are curious, they come out and I try to implore them to make financial contributions to help said organization thrive,” Hillery said.