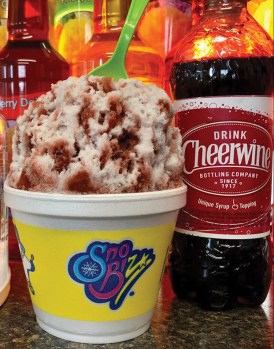 Called the Cheerwine Sno Creme, this Sno Biz creation will be one of many Cheerwine-inspired items offered during the festival. Photo submitted. 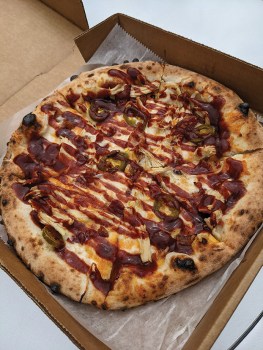 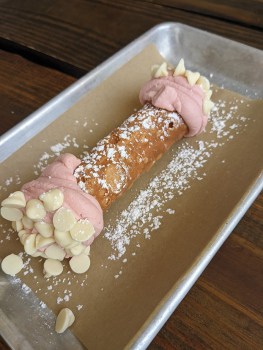 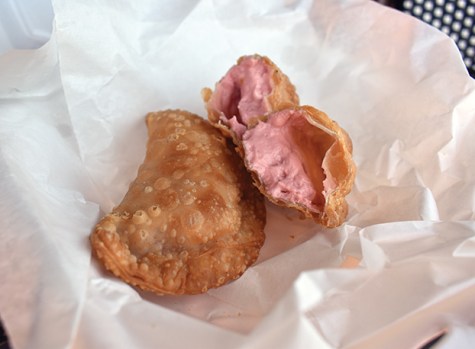 These Cheerwine cheesecake empanadas from Mambo on Ruedas are packed with well-balanced Cheerwine flavor. Ben Stansell/SalisburyPost

SALISBURY — Kristan Friel was determined to get the flavor just right.

In the spring of 2018, Friel and her team at Sno Biz in Granite Quarry were attempting to re-create the wild cherry flavor of Cheerwine soda in snow cone form.

Friel felt the weight of the mission on a personal level.

“I was born and bred in Salisbury and I grew up on Cheerwine,” Friel said. “I wanted the Cheerwine flavor and not just a canned soda poured in to make a slushy. I wanted something richer.”

Various tastes were combined and many concoctions were made. There were trials and there were errors. But by combining Cheerwine syrup with Sno Biz’s vanilla flavoring and pouring a little cream on top, Friel and her team eventually captured the elusive taste she was after.

“It was an overwhelming sense of … finally, I got it,” Friel said.

Friel’s snow cone will be one of dozens of Cheerwine-inspired food items sold by vendors during the Cheerwine Festival in downtown Salisbury on Saturday. The event is making its in-person return after it was held virtually in 2020 and canceled last year.

Like Friel, other vendors have put their creativity to the test to incorporate the trademark Cheerwine taste into staple dishes.

The Old 97 Kettlecorn Company will be busy making fresh Cheerwine kettle corn. The Gnosh Pit from Garden City, South Carolina is cooking up a pork loin with Cheerwine sauce. El Patron is making Cheerwine tacos and Rascal Jack’s Sandwich Shop is slated to serve up Cheerwine meatball subs. From Cheerwine bacon on a stick to ribs slathered in Cheerwine barbecue sauce, Cheerwine will come in previously unthinkable shapes and sizes on festival day.

A few of the items, like Sno Biz’s Cheerwine Sno Creme, are sold year round. Most are available for one day only.

Joy Ritchie Harper, vice president of marketing for Cheerwine and fifth-generation founding family member, is ready for people to experience the diverse mix of Cheerwine products.

“It’s really exciting to see the different styles of food that Cheerwine can be infused in,” Harper said.

Cheerwine, which hosts the event in conjunction with the city of Salisbury, has continued to encourage vendors to push the culinary limits since the inaugural Cheerwine festival in 2017. The company, founded in Salisbury in 1917, has a special section on its festival application that asks if a vendor plans on selling a Cheerwine-inspired menu item.

But the vetting process doesn’t stop there.

Sometimes, a taste test is involved. Occasionally, Harper said, they’ll ask a vendor to amp up the Cheerwine flavor, or tell them to use the syrup instead of the soft drink, or vice versa.

Cheerwine has good reason to be hands on during the process.

“Cheerwine’s taste is something that’s been important for us for over 100 years,” Harper said. “We do take pride in our flavor and want to protect that and make sure it’s being represented in a way the company is comfortable with.”

Jalen Reeves of Vita Da Pizza felt the pressure of living up to those standards when he went about crafting the Cheerwine cannoli and Cheerwine barbecue chicken pizza his Charlotte-based food truck will carry on festival day.

Vita Da Pizza will be participating in the festival for the first time this year.

Reeves said adding the soft drink’s flavor to the house cannoli was a “home run,” but tinkering with the Cheerwine barbecue sauce required a bit more thought.

“I see so many Cheerwine barbecue sauces already with us being in North Carolina, but I wanted ours to stand out,” Reeves said. “I wanted the pizza as a whole to be different. It wasn’t challenging, but I challenged myself within that I guess. We wanted to make sure we could really hit a home run with that as well.”

Vita Da Pizza even brines the chicken in a “thick Cheerwine sauce” to make sure the chicken itself tastes like Cheerwine, not just the sauce it’s tossed in before being put on the pizza.

“It’s two different levels of Cheerwine and it comes together beautifully,” Reeves said.

While Reeves was focused on making his Cheerwine dishes stand out, Ariella Sanchez of Mambo on Ruedas was trying to strike a balance with her Cheerwine cheesecake empanadas.

“One of the big things for us is we’re Cuban, so how do we make something that is authentic to us with Cheerwine that doesn’t really mess with how authentic the food is?” Sanchez said. “We went around in circles trying to figure out the best way to do that.”

Mambo on Ruedas, the food truck that accompanies Mambo Grill & Tapas at 122 E. Fisher St., started offering the empanadas at the 2018 Cheerwine festival.

Sanchez and her father drew inspiration for the empanadas from the brandy cherries Mambo makes in-house to pair with its signature old fashioned cocktail. From there, it was all about getting the flavors to unite,

“It really was just playing around,” Sanchez said. “It was my dad and I tasting and adding the things we felt like would balance each other out.”

To make the empanadas, Sanchez simmers cinnamon, a little bit of cardamom, fresh orange juice and orange peel with Cheerwine syrup for about an hour on low heat. Then, she whips cream cheese and adds the syrup to it. All that comes together inside a pastry to form what Sanchez calls “a little pocket of goodness.”

Cheerwine items are oftentimes the most popular among festival goers.

Friel is expecting to sell hundreds of Cheerwine snow cones. Sanchez is preparing to sell more than 2,000 empanadas, which come in orders of two. That many empanadas, along with the other regular menu items Mambo of Ruedas will offer, requires a significant amount of prep time.

“Just in prep time before the festival, we’re looking at like 80-90 hours worth of work between everybody,” Sanchez said.

“That is what makes this festival so different is that it is one product, but you have so many vendors approaching this product from their mentality and what they do,” Sanchez said. “So, you’re getting this product in a plethora of ways.”

The Cheerwine Festival will be held in downtown Salisbury on Saturday, May 21 from noon to 10 p.m. More information is available online at cheerwinefest.com.