Quotes of the week: ‘I wondered why I’d been left here so long’ 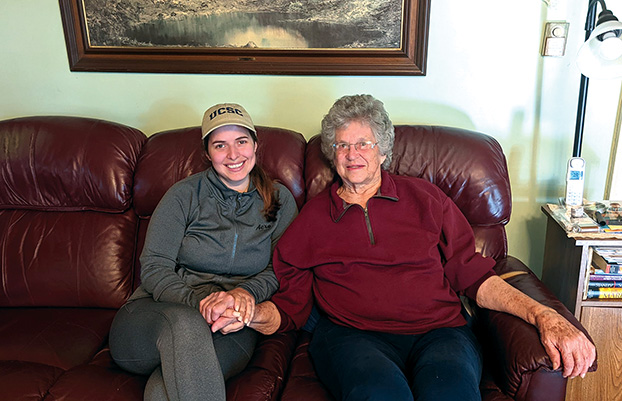 Pranvera Hyseni, left, surprised Thelma Archer at Archer's China Grove home last month. Hyseni was there to thank Archer for sending a care package to her in Kosovo 23 years ago. Photo submitted.

“When (Pranvera Hyseni) left, I said to my granddaughter, ‘I wondered why I’d been left here so long,’ I guess this was maybe one of the reasons to fulfill that young girl’s dream.”

— Thelma Archer, who will turn 92 in August after meeting the recipient of an Operation Christmas Child shoebox many years ago

“We’ve had a great time getting prepared, placing orders, being in the kitchen for the last couple hours and him showing everybody how to do
everything. It’s been a wonderful experience.”

“I am getting a little tired of getting notices from the state treasurer’s office asking for this.”

“When you are a soldier, you never take it upon yourself to think about yourself. It actually feels odd to know there are
people out there that want to help me.”

— Timothy Blume, former Marine after the nonprofit Purple Heart Homes replaced his home’s deck that had fallen into disrepair

“I’d swim from Australia to be here with Carlos.”

— Edward Robinson, who flew in from Spain to be with his artist friend Carlos Mazuka at this year’s Hippie Fest at the Rowan County
Fairgrounds

“I look at her and she just amazes me. She just proves it can be done. She’s got so much patience and love for these kids it’s amazing.”

— Linda Layok, who nominated winner Brandy Smith for Wonder Woman of the Year at a Mother’s Day festival put on by West Rowan Home and Garden

“The kids take it upon themselves to make something for you, they say ‘thank you’ or ‘I love you,’ ‘you’re the best ever,’ things like that. You can tell they hand made it and gave it some thought.”