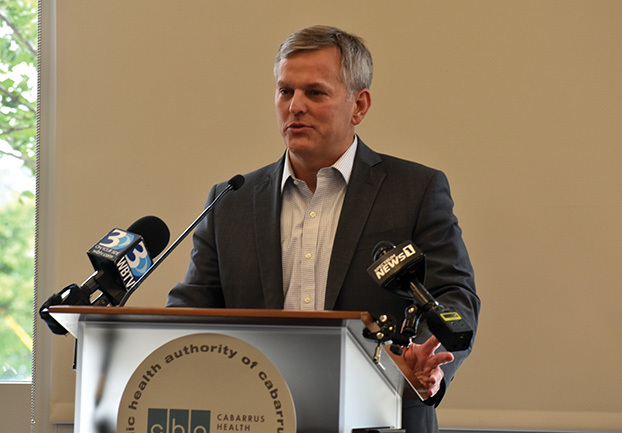 KANNAPOLIS — During a visit to the Cabarrus Health Alliance on Thursday, North Carolina Attorney General Josh Stein outlined how he expects money from the $26 billion national opioid settlement to help North Carolinians.

While Stein acknowledged the opioid epidemic is a “deep-seeded, complex, multifaceted problem,” he believes the money coming from the settlement will help ensure there are “more people alive next year and the year after and the year living healthy, happy lives free of addiction than otherwise would have been.”

Earlier this year, four major pharmaceutical companies — AmerisourceBergen, Cardinal Health, McKesson and Johnson & Johnson — agreed to terms to settle a flurry of lawsuits filed against them for the roles they played in fueling the opioid epidemic.

Speaking to leaders mostly from Cabarrus and Stanly counties just a short distance from the Rowan County line, Stein called the opioid crisis the most deadly drug epidemic in American history.

“We are all here today because of this opioid crisis that is the deadliest drug epidemic in American history,” Stein said. “And tragically, we are at the deadliest moment.”

Across the country, recorded overdose deaths surpassed 90,000 in 2020. Preliminary figures from the Centers for Disease Control released this week show that 2021 was even deadlier, with ​​nearly 107,000 people dying from overdoses last year — the most on record.

Overdose deaths increased 40% in North Carolina from 2019 to 2020, increasing from 2,352 deaths to 3,304. According to the opioid settlement website, nearly 8 North Carolinians die everyday from opioid overdose.

“That’s about 150 in these three counties alone,” Stein said. “These people have families. They had mothers and fathers and brothers and sisters and friends and children. And there are holes in their hearts because of their passing.”

Stein said the opioid crisis was caused by greed.

“Drug companies made billions and billions of dollars selling these pills while millions of Americans got hooked on opioids,” Stein said.

Stein was one of several state attorney generals who helped negotiate the opioid settlement on the national level.

“(Stein) drove the bus nationally,” said Rep. Wayne Sasser, who spoke during Stein’s visit to Kannapolis. “This wasn’t something that he just went up to see how much are you going to give us? He had the program, he knew how to implement the program and, again, was able to negotiate.”

As a result of Stein’s efforts and the work of other attorney generals, North Carolina will receive $750 million from the settlement.

Disbursements are already underway, with more payments coming in July.

Rowan County is slated to receive $15 million from the settlement, an amount determined by a complex formula that included overdose deaths, extent of addiction and even the number of pills distributed within county limits.

All of the funding from the settlement must be used for prevention, treatment, recovery or harm reduction strategies. Counties can develop their own plans for the funding within that framework.

Rowan County is currently working on a plan for how the county will utilize the funding.

Healthcare, nonprofit and political leaders have discussed creating a detox center to treat overdose patients. It’s uncertain if the county will use settlement funding to make the center a reality, but Stein said it would certainly classify as a permissible use.

“That’s a perfect use,” Stein said.

The funding, Stein said, could also be used to help fund existing programs. One Rowan County program that could benefit is the Post-Overdose Response Team. Launched in 2019, the team works to make contact with a person following an overdose and connect them with resources including treatment facilities, support meetings or counseling all in an effort to help them fight their addictions.

To ensure the settlement money is used for its intended purpose, the state will maintain an online dashboard with information on how each county has spent the funding.

“Any North Carolinian is going to be able to know exactly what every county and what the state did with its share,” Stein said.

The lawsuit against AmerisourceBergen, Cardinal Health, McKesson and Johnson & Johnson may be settled, but Stein doesn’t think it will be the last time major companies are forced to pay for the opioid epidemic.

“That 26 billion dollars from that national opioid settlement will not be the end of this work,” Stein said. “There are more cases to come.”