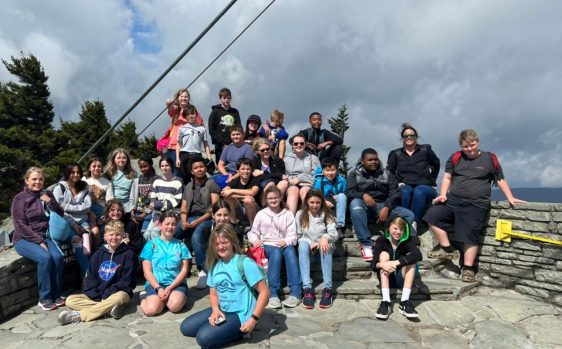 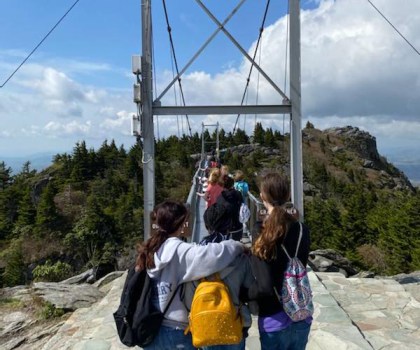 SALISBURY  — A group of North Hills Christian School students made the trip to see one of the state’s natural treasures last week.

On May 4, the school’s sixth graders made their way up to Grandfather Mountain and got to view “creepy critters” like snakes, worms, centipedes and iconic mountain salamanders.

Sixth grade teacher Dawn Gilland said the wind speeds climbed above 50 miles per hour that day when the students went on the attraction’s swinging bridge before making a trip to the mountaintop gift shop and visiting the large animal enclosures at the site housing black bears, elk and bald eagles among others.

Gilland said the sixth graders at the school usually take this trip, but for the past two years it has been called off due to the COVID-19 pandemic and this is the first major field trip the class has taken.

Gilland said the trip was relaxed and the students did not have to feel like they were walking on eggshells with almost all COVID-19 restrictions removed.

“I think it’s a neat trip for the kids because we talk about animal habitats, animal life cycles, animal kingdoms and the kids are able to look at them, classify the animals and understand them a lot more,” Gilland said. “It’s a little bit far away but for sixth grade it’s a really neat trip to take. Also you can do it at the end of the school year and it’s something really fun for them to do with their friends.”

Gilland said she loves the mountains and will be taking a trip back there this summer.

“I just love seeing the kids’ expressions too when they’re having fun, enjoying themselves and learning,” Gilland said.

Student Kara Hagler said her favorite part of the trip was the swinging bridge because she got to share the experience with her classmates.

“I wanted to create memories over this year because it’s the start of upper school,” Hagler said.

Hagler said the bridge was a bit scary as she held on to her glasses and phone while she recorded.

She said she learned a lot, like how salamanders may try to hide but are less timid than you may expect around humans.

Fellow student Cheyenne Owens said her favorite part of the trip was seeing the clouds cast shadows over the mountains from the peak. She said the view reminded her of her trip to the top of Stone Mountain.

“I thought it was unique,” Owens said.

She said she learned about how the area is a hub for salamander research and scientists travel there to study them.

Rebecca Pugh said her favorite part of the trip was seeing all the animals and visiting the gift shop.

“I just like shopping for some reason,” Pugh said, adding seeing the animals was fun because she does not visit zoo facilities often. Her favorite enclosure was for the bald eagles.