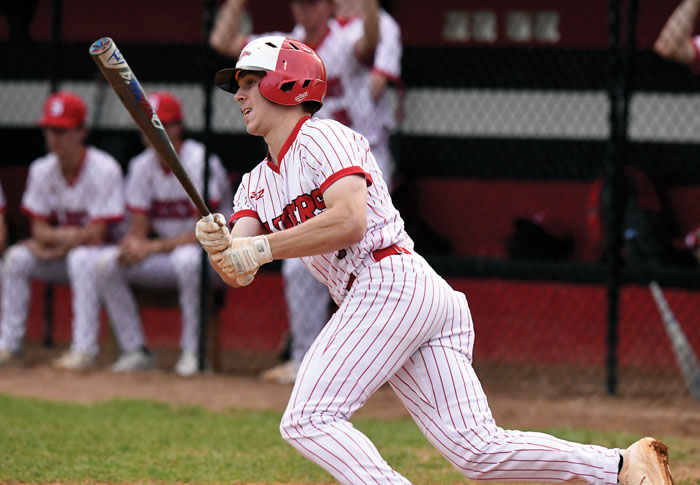 South's Nathan Chrismon will be called on the provide an offensive spark for the Raiders tonight. File photo by Wayne Hinshaw, for the Salisbury Post

SALISBURY — Tristan Miller for president signs may have appeared in Granite Quarry today.

Miller’s clutch hit in the bottom of the eighth kept East Rowan’s baseball season alive on Tuesday, but now the ninth-seeded Mustangs must make a long road trip to No. 8 seed Enka.

With foul weather expected Friday, most of the area baseball and softball second-round playoff games have been moved up a day.

If you’re wondering how in the world a 24-4 record gets you a road game at a 12-9 team, well, those pesky split leagues are factoring in again.

Enka is near Asheville, so the Mustangs will put N.C. State commit Chance Mako on the mound at the end of a 140-mile western journey. Mako is about 6-foot-6, so he always pitches at elevation. He should be fine.

Second-round action for the Mustangs was made possible by Miller, who is known mostly for his defensive work at catcher. Batting ninth in the lineup, his single with the bases loaded and one out provided a narrow 3-2 victory and a lot of sighs of relief.

Win probability for the Mustangs probably dipped below 50 percent in the top of the eighth, with Cameron Padgett reaching the pitch-count limit and North Gaston putting two men on base with one out against young reliever Logan Dyer. But Dyer got two strikeouts to escape,

Then Miller did what he did, and the Mustangs will play again. If you can’t make the ride to Enka, the game is being broadcast by WSAT. Pregame starts at 6:35 p.m.

South Point at South Rowan will be played tonight at 7 p.m.

As expected, top-seeded South Rowan waltzed past No. 32 seed West Charlotte 23-1 in five innings in first-round action that included a 13-run third inning by the Raiders.

South Rowan (23-4) put a bunch of 3s in the boxscore. Three steals by Nathan Chrismon and Kane Kepley. Three hits by Colton Fisher. Three RBIs by Ty Hubbard. And so on and so on. There were a lot of 2-for-2 nights.

Chandler Oddie is undefeated and has been terrific all season, but you’d have to say he’s the third pitcher for South Rowan. He threw three innings against West Charlotte, with Noah Washburn finishing off the Lions.

What that means is South Rowan still has its top two arms — Wake Forest commit Haiden Leffew and undefeated Carson Crainshaw — available tonight, as needed. That could be important because this one figures to get serious. Maybe it goes extras. Maybe South’s starter reaches the pitch-count limit. It’s going to be nice to have both of them ready.

South Point (15-7) beat West Rowan 4-1 and won against stout lefty Casey Gouge on Tuesday, with the turning point coming on the double play the young men from Belmont turned with the bases loaded to end the bottom of the first inning. That was a big momentum swing.

Both teams are Raiders and both teams wear red and black.

Does South Point have another hurler like Jake Beaty, who shut out West Rowan after the first inning?  We’ll find out tonight.

Carson’s baseball team is the No. 14 seed in the 3A West bracket and won a 3-2 thriller against North Henderson at home on Tuesday.

Not surprisingly, Hayden Simmerson did most of the heavy lifting for the Cougars (17-10) with 12 strikeouts. The Cougars made stellar defensive plays — left fielder Austin Efird threw a runner out at the plate in the sixth to keep the lead — and they hit just enough.

Carson will play at Kings Mountain tonight. First pitch is scheduled for 6:30 p.m.

Kings Mountain (18-5) is the No. 3 seed in the 3A West for a reason. The Mountaineers won the Big South Conference, which also includes Crest, South Point and North Gaston.

Kings Mountain walloped 12 homers, which is a lot these days. Caleb Broome is a .400 hitter.

Kings Mountain edged Tuscola 4-3 on Tuesday and used ace Zane Brockman and reliever Wyatt Davis to survive that one.

Right-hander Charlie Melton (5-1, 1.20 ERA) will no doubt hurl for the Mountaineers against Carson. Melton isn’t exceptionally big, but he throws 86 mph.

On the mound, Carson will use lefties Mikey Beasley and Casey Crawford. They’ll probably both be needed.

In 4A, No. 29 Davie surprised No. 4 seed Sun Valley, with Parker Aderhold driving in three runs.

Next for Davie is a game at CPC rival West Forsyth.

Not surprisingly, South Piedmont Conference teams fared very well in Tuesday’s first round of the 3A playoffs.

No. 12 seed West Rowan (19-5) won in a 10-0 home blowout of Eastern Guilford that included homers by Emma Clarke and Brooke Kennerly and a one-hitter by freshman Arabelle Shulenberger.

East won 6-3 against Ledford with Kori Miller getting three hits to support a complete game by freshman pitcher Eleni Miller. Carson got a complete game from Lonna Addison and socked a lot of doubles to win 9-5 at West Henderson.

All three Rowan teams will be on the road in the second round, and they’ll be facing some of the state’s best.

West’s game at No. 5 seed Central Cabarrus is still scheduled for 6 p.m. on Friday. Three of West’s five losses have been to Central Cabarrus (21-4), but maybe the Falcons are due. It’s hard to beat a good team three times, much less four times. The last two meetings have been tight.

Seeded fourth in the 4A West bracket, Mooresville handled Butler 7-0 in the first round.

The Blue Devils will be at home against No. 13 Piedmont (19-6)  in Round 2. Piedmont eliminated Davie in the first round.

South Rowan’s season ended at 12-12 with a 3-2 first-round loss at Smoky Mountain, a conference champ. Kynlee Dextraze hit a two-run homer for the Raiders. Kali Nelson had two hits. Lexie Ritchie pitched a complete game. Dextraze and Ritchie are freshmen, so the future is bright for the Raiders.