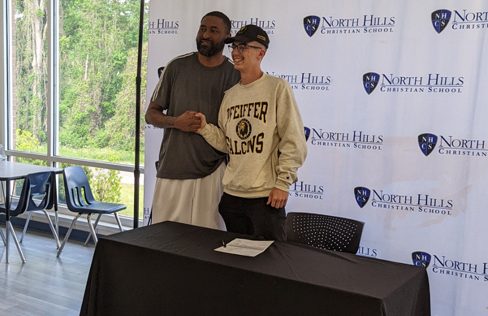 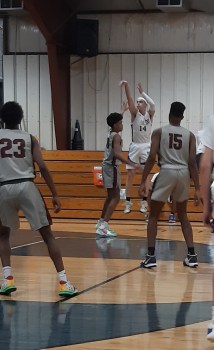 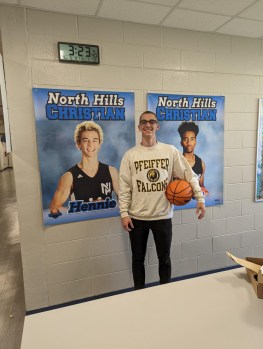 Hennie will be part of Pfeiffer University’s program in the fall.

North Hills coach Marvin Dixon, who starred at Salisbury High, has been around the game a long time and has a lot of contacts. One of those contacts is Pfeiffer assistant coach Don Spencer, and that led to a college opportunity for Hennie, a late-blooming 6-foot-4 shooting guard.

Hennie went to Carson for three years, playing two seasons on the jayvees. His junior year he was varsity reserve who was pretty far down the bench during the season that was drastically shortened by COVID.

“I was a little guy when I got to Carson, maybe 5-f00t-10, having some knee problems, and I definitely needed to get better,” Hennie said. “Coach (Brian) Perry is a great coach and I can’t  say anything at all against him or the program or the school. But heading into my senior year, I was looking for a better opportunity to play and I had some buddies at North Hills.”

Basketball opportunity arrived at North Hills. All the minutes that Hennie could stand.

There are about 300 students enrolled in the school, but that number is spread out from kindergarten to seniors.

“I worked at basketball all summer and got ready for my senior season,” Hennie said. “Coach Dixon saw something in me and instilled a lot of confidence in me and I couldn’t have asked for more opportunity than I got. We had kind of a rocky season as a team, playing against some real quality teams, but I know I improved a lot.”

Hennie recalls making a long 3-pointer on opening night back in November as a personal turning point.

There was a game in December in which he got hot and scored 12 points in less than two minutes. That fueled more confidence.

Mostly, he was consistent. He put lots of 11s, 12s and 13s in the North Hills scorebook and averaged double figures. Then he had that big, 25-point finish in a tournament game.

“I made some 3s, but I was mostly focused on trying to be a better defender and I prided myself on defense,” Hennie said. “I always tried to make it difficult for my man to score. Not a lot of people want to be great on defense, but I worked at it.”

In 2016, Pfeiffer began the process of transitioning from Division II to Division III athletics.

Pfeiffer is now a full member of the USA South Conference and competes with schools such as Methodist, Averett and Greensboro.

As a D-III school, the Falcons no longer give standard athletic scholarships, but they recruit strong students who are also good athletes. About 75 percent of D-III student-athletes receive aid based on either need or their academic efforts.

Hennie was impressed when he visited Pfeiffer.

“A very nice campus and they seemed to care as much about me as a person as they did as a basketball player,” Hennie said.

Pfeiffer offers a highly regarded five-year program for students to earn a Bachelor of Science in Business Management and Leadership degree and an MBA.

That’s Hennie’s long-range goal, but he also hopes to make some 3-pointers and get some steals for the Falcons.

“I’m excited about the chance,” Hennie said. “Coach Dixon believed in me and the North Hills faculty and students took in the new guy and made me feel at home. North Hills was the right place for me.”