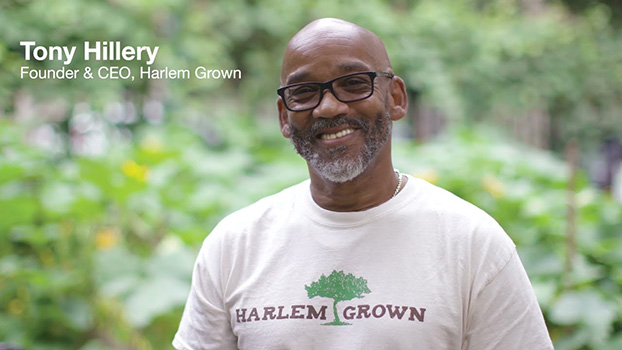 Tony Hillery, the founder and CEO of Harlem Grown, will read to folks during Earth Day Jam on Saturday. Hillery will read the book he authored about his experiences of starting an urban garden in a school in Harlem. Photo submitted.

SALISBURY — In 2011, Tony Hillery walked into an elementary school in Harlem with the goal of inspiring students.

Hillery, the founder and CEO of Harlem Grown, will read his children’s book titled “Harlem Grown: How One Big Idea Transformed a Neighborhood” and engage with students during Earth Day Jam. The annual event is back this year and for the first time will be held at Bell Tower Green from 11 a.m. to 11 p.m.

Earth Day Jam is free and open to the public.

The event will feature 11 bands on two stages, environmental education booths, artisan vendors, local foods for sale and more. Earth Day Jam is a benefit for Happy Roots, a local nonprofit that provides nature-based therapeutic and educational programs to enhance the wellness of the community and the environment through school and community gardens, environmental stewardship and nature therapy. Happy Roots currently works in 25 local schools.

Ashley Honbarrier, executive director of Happy Roots, has drawn parallels between her organization and Hillery’s Harlem Grown, whose mission is to inspire youth to lead healthy and ambitious lives through mentorship and hands-on education in urban farming, sustainability and nutrition.

Hillery launched Harlem Grown in 2011 after he recruited students in that elementary school to help him revive an abandoned garden across the street. Working in the garden, Hillery said, created noticeable change among the students.

“When I walked into that school, children couldn’t even identify a vegetable — much less eat it,” Hillery told the post. “Vegetables were like kryptonite to Superman to these children. After this exposure, you saw them eating it right off the vine and marveling at the simplicity of nature.”

The following year, Harlem Grown built the first and only commercial hydroponic greenhouse in Manhattan on a vacant city-owned lot. This greenhouse produces 9,300 heads of leafy greens a month, one-third of which are given away free to students and the community. The rest is sold to restaurants.

Since then, Harlem Grown has expanded to include 10 working urban farms in Harlem and NYC.

Hillery’s book (with illustrations by Jessie Hartland) about how the nonprofit was created was published in 2020.

Honbarrier read Hillery’s book to a class at Knox Middle School last year. She posted about it on Facebook and Hillery reached out to her. He offered to come read to students anytime she asked. Honbarrier took him up on that offer for Earth Day Jam.

Hillery will conduct three book readings at 1, 3 and 5 p.m. He said he wants the readings to encourage children to go dig in the dirt.

Honbarrier is hoping for the same.

“I’m really excited for a lot of people to see him and hear his story and hopefully it will inspire people here to get involved in the gardens,” Honbarrier said.

More information about Earth Day Jam can be found on the event’s Facebook page or at earthdayjamnc.com.