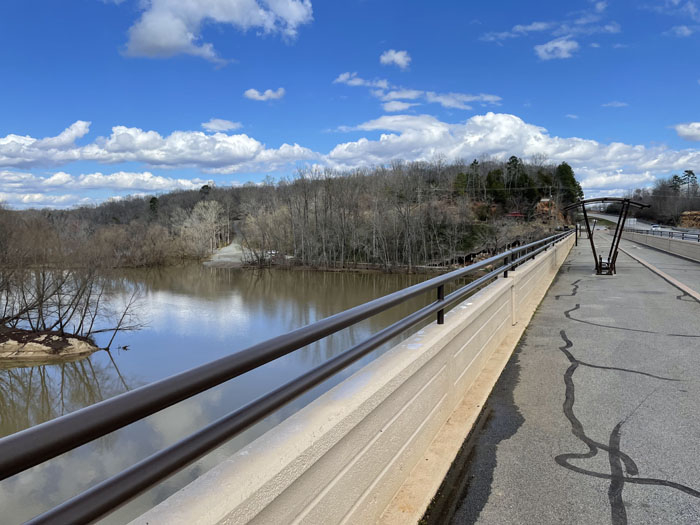 Most of the completed parts of the Yadkin River Park are on the Davidson County side, but Spencer is closer to construction for its trail portions. Paris Goodnight/Salisbury Post

SPENCER — Spencer has received another injection of funding for its Yadkin River trailhead project and is hoping to break ground later this year.

Town Special Projects Planner Joe Morris announced the town has been awarded $100,000 from the state’s Recreational Trail Program during the town’s regular Board of Aldermen meeting on Tuesday.

The project was delayed so the town could pursue raising funds through grants to build multiple phases at once, rather than starting a barebones project and adding amenities later.

Morris said the town reached out to the program administrators and the town was told the goal is to have a contract for the grant this week. Morris said he was told Spencer’s project is at the top of the list because it is “shovel ready,” with design, permitting and other checklist items already completed.

When Morris turned the presentation over to the board, Mayor Jonathan Williams began by backing away from the microphone and starting a round of applause for Morris’s work on the project.

“Not that he’s keeping score, but Joe, how much have you raised for the Yadkin River trailhead?” Williams asked.

Morris eschewed too much credit for how much the town has raised, noting Friends of Rowan’s Ronnie Smith showed up to a meeting and announced a $250,000 commitment to the project and he can’t take credit for that. The project was also recently awarded a grant by Carolina Thread Trail for $50,000.

How much the project will eventually cost will be determined through the bidding process. The town has to wrap up paperwork and is ready to take it to bid for a contractor.

“It’s easy to get these grants when the projects are compelling and they align with what the purpose of the grant program is,” Morris told the board. “And Spencer is very fortunate to have a number of things that have been identified and planned and have gone undone, are ready to be done, that we can point to and say, ‘This is what we’re trying to accomplish.’ ”

Morris said he is happy to be part of the project.

Alderman Sam Morgan asked if Morris could give a realistic timeframe for when construction could start. Morris said if a contract is in place by the end of May, and bids are returned by July or August, construction could likely begin in the fall.

The town is planning to include parking, trails and amenities on its side of the Wil-Cox Bridge, which leads to the development of the Yadkin River Park on the Davidson County side.