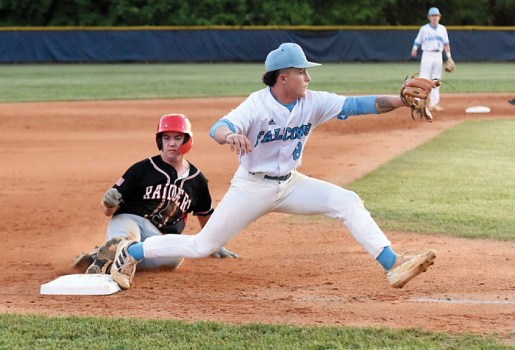 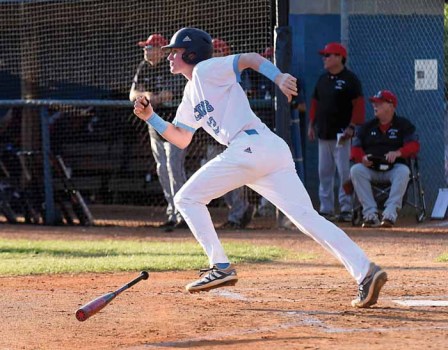 West Rowan's Matthew Connolly gets a hit. photo by Wayne Hinshaw, for the Salisbury Post 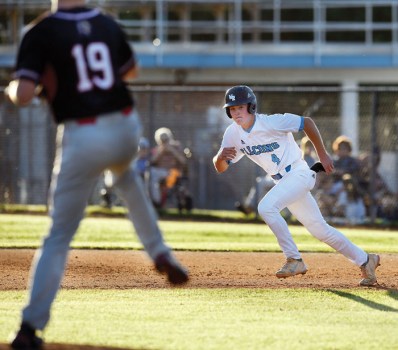 West's Noah Loeblein leaving first base with his eyes on South Point pitcher Jake Beaty. photo by Wayne Hinshaw, for the Salisbury Post 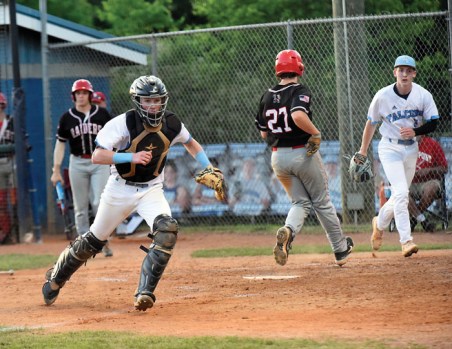 South Point's Camden Ashe 27 scoring as, West's catcher Noh Loblein 4 goes after the ball with pitcher Casey Gouge 5 on the right. photo by Wayne Hinshaw, for the Salisbury Post 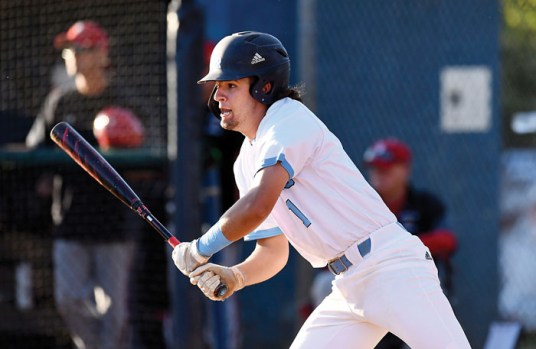 West's Luke Graham gets a hit. photo by Wayne Hinshaw, for the Salisbury Post

The 16th-seeded Falcons (15-11) had a chance for a big inning early, but rapped into a double play with the bases loaded and settled for one run in the bottom of the first.

That’s all they got against South Point hurler Jake Beaty. West had only one hit after the first inning.

Luke Graham, Noah Loeblein and Matthew Connolly had hits for West. Connolly had a single that scored Graham in the first inning.

Casey Gouge struck out eight and gave the Falcons a chance, but took the loss. Jake Blevins, another senior, came in to get the last out in the top of the seventh.

LANDIS — Chandler Oddie and Noah Washburn pitched for 3A West No. 1 seed South Rowan in a 23-1 romp against No. 32 West Charlotte.

They combined for 10 strikeouts in a five-inning game.

South (23-4) scored four runs in the first and three in the second and made it a romp with a 13-run third inning.

Fisher had three hits. Hubbard had two hits. Chrismon and Kepley had three steals each.

It was the 23rd victory for South, tying the school record set in 1996.

GRANITE QUARRY — East Rowan, seeded ninth in the 3A West bracket, barely survived a first-round challenge from No. 24 North Gaston in extra innings.

No. 9 batter Tristan Miller delivered the game-winning hit in the eighth inning at Staton Field after a lead-off single by Nate Hayworth, a bunt single by Cameron Padgett and a walk to Austin Fulk loaded the bases.

East starter Cameron Padgett struck out 11 but reached his pitch-count limit (105) after getting the first out in the eighth.

Relief pitcher Logan Dyer quickly got in a jam in the eighth, but he got out of it with two strikeouts and eventually earned the win.

Padgett and Hayworth had run-scoring singles to account for East’s first two runs.

The Mustangs (24-4) had chances to end the suspense right away, but left six men on base in the early innings and had several more men cut down on the base paths.

East will play at No. 8 Enka on Friday.

CHINA  GROVE — Playing at home, No. 14 seed Carson took an exciting 3-2 win against North Henderson (16-9) in the first round of the 3A state playoffs on Tuesday.

Hayden Simmerson went the distance on the mound, striking out 12 and walking one. He allowed four hits.

At the plate, Simmerson produced two hits. Cameron Burleyson had two hits, including a triple. Aaron Coe had a double. The Cougars had seven hits.

Left fielder Austin Efird made a key defensive play for the Cougars in the sixth, throwing out a runner at the plate to preserve a 3-2 lead. Burleyson made the tag.

Davie (13-11) advanced in the 4A playoffs as a No. 29 seed. The War Eagles will take on a familiar opponent in West Forsyth on the road on Friday.

West Forsyth beat Cox Mill 10-3 in the first round.

Jacob Allen and Trent Grigley had two hits for the Trojans.

MOUNT ULLA — West Rowan, seeded 12th, hammered Eastern Guilford 10-0 in the first round of the 3A state playoffs.

Arabelle Shulenberger struck out eight and allowed only one hit.

Emma Clarke had four RBIs. She hit a three-run homer in the third inning after hits by Ashlee Ennis and Kenadi Sproul.

Brooke Kennerly followed a triple by Clarke with a two-run homer in the fourth inning.

West plays at fifth-seeded Central Cabarrus (21-4) on Friday. The Vikings routed Fred T. Foard 18-4 in the first round.

It was 3-all after five innings, but a four-run sixth propelled the Cougars (13-11).

Lonna Addison struck out five and pitched a complete game.

Addison and Makayla Johnson had two RBIs each. Brooklyn Davis had two hits.

Kori Miller had three hits and scored two runs for the Mustangs (16-8).

•••
MOORESVILLE — Campbell Schaen and Morgan Smith combined on a one-hitter and Ellie Goins homered as fourth-seeded Mooresville handled Butler 7-0 in the first round of the 4A playoffs.

MONROE — No. 13 seed Piedmont eliminated 20th-seeded Davie 6-2 in the 4A playoffs. Sydney Dirks and McKenzie Mixon hit solo homers for the War Eagles (15-9).