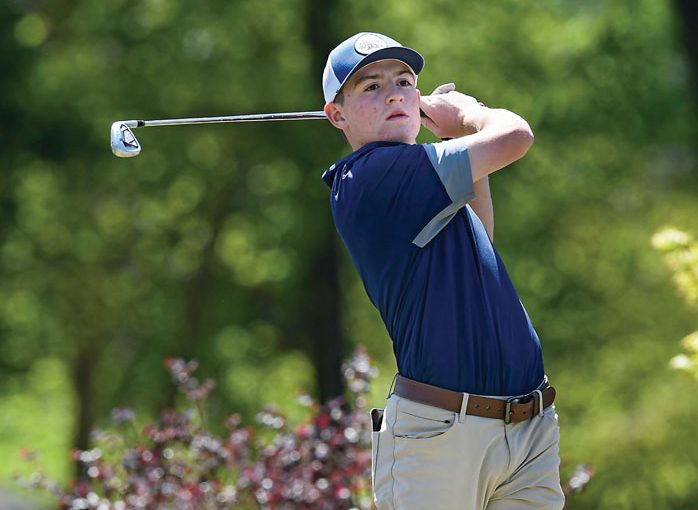 PINEHURST — Rowan County champion Landon Merrell bounced back with a solid 76 on Tuesday and provided most of the highlights for local golfers in the state championships.

Merrell’s 39-37 round on Day 2 of the 3A Championships on Pinehurst No. 6 included back-to-back birdies on holes 3 and 4, and he also birdied the No. 8 hole. He had two double bogeys on the back side, but he made 10 pars, including a stretch of six in a row.

The East Rowan sophomore made a nice jump on the leaderboard after his opening-round 81 and finished tied for 19th.

South Rowan senior Jackson Black shot 85 on Tuesday, six shots better than his windy Monday round. Black triple-bogeyed No. 4, but came back immediately to birdie No. 5. He tied for 68th.

J.H. Rose of Greenville breezed to the team victory. Lake Norman Charter, led by Ben Bailey’s rounds of 75 and 78, placed seventh in the team competition.

Talan Harrison of Northwest Cabarrus shot his second 77 of the tournament on Tuesday and tied for 14th,

Salisbury’s team competed in the 2A State Championships held on the Red Course at Foxfire.

The best round for Salisbury on Tuesday was Will Webb’s 88 that included a 38 on the back nine. Webb birdied the 16th hole and made seven pars. He finished in a tie for 40th.

Freshman Warren Fespermam shot 89 for the second straight day and finished 50th. He made a birdie on No. 18 and had seven pars.

Wyatt Reeder shot 89 on Tuesday and finished 11th for the tournament.

Jacob Trainor shot 90 on Tuesday and tied for 28th for the tourney.

Finley Church shot 88 on Tuesday, 18 strokes better than he did on Monday and finished 52nd.

South Stanly was the team champion.