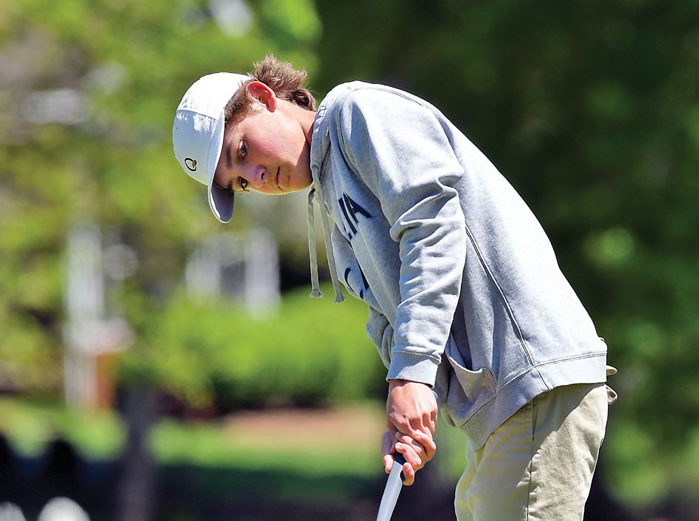 West Rowan senior McGwire Owen turned in the strongest round of a contingent of Rowan County golfers, as they battled state-championship pressure and challenging Pinehurst area courses on Monday.

This was Day 1 of a two-day grind for all the golfers, who played nine-hole matches during regular season. State championships are 36 holes.

Owen’s 30-37 — 77 in the 3A State Championships conducted on Pinehurst No. 6 included two birdies.

Other than a double bogey on No. 4, he turned in a steady outing, carding 10 pars and five bogeys.

At 5-over, Owen is tied for ninth place, but he’s only four shots behind Nick Norman of Forestview. Norman’s 1-over 73 was good for a spot alone at the top of the leaderboard.

Merrell had some smooth stretches — four straight pars on the front side and five straight on the back side. He made 11 pars in all, but four double bogeys made it a bumpier ride than normal for the unflappable sophomore. He made a birdie on No. 4.  He’s tied for 39th and is eight shots off the pace.

Merrell is one shot behind a cluster of 10 golfers at 80, so he could move way up the leaderboard with a good round today.

He made four pars and nine bogeys.

Like Owen, Merrell and Cranfield, South Rowan senior Jackson Black qualified for the state event as an individual. He shot 44-47 — 91.

One birdie and two pars helped Black overcome a triple bogey on No. 14 and three double bogeys.

Playing on the Red Course at Foxfire, Salisbury’s team had a well-balanced effort in the first round of the 2A State Championships.

Senior Nick Antosek’s 40-44 — 84 led the Hornets. He birdied a par-5 and was solid for 16 of the 18 holes. Tied for 28th, Antosek took a double bogey on No. 17 and struggled to a quadruple bogey on the par-4 11th hole, a hole that also created and adventure for teammate Will Webb.

Webb birdied the par-3 17th hole. He made eight pars and seven bogeys.

Freshman Warren Fesperman shot 47-42 — 89. He turned in one stretch of four straight pars and finished strong, but four double bogeys and a triple on the 525-yard par-5 No. 9 hole hurt him.

Senior Luke Graeber also checked in at 17-over with a 44-45 — 89. He carded a triple bogey and four doubles, but he also had a consistent stretch of four straight pars.

In the team chase, East Surry and Midway are tied for first at 40-over. West Davidson is third at 48-over. In a 12-team field, the Hornets are in a three-way tie for sixth at 59-over.

Graeber will have the Hornets’ earliest tee time today at 10:24 a.m.

In the 1A State Championships being held at Longleaf Golf and Family Club in Southern Pines, Gray Stone has three individual qualifiers competing.

Junior Wyatt Reeder shot 8-over 80 and is in seventh place, five shots behind the leader.

South Stanly is in first place in the team standings at 49-over.

In the 4A State Championships held on Pinehurst No. 8, Charlotte Catholic has opened up an 11-shot lead in the team scoring.