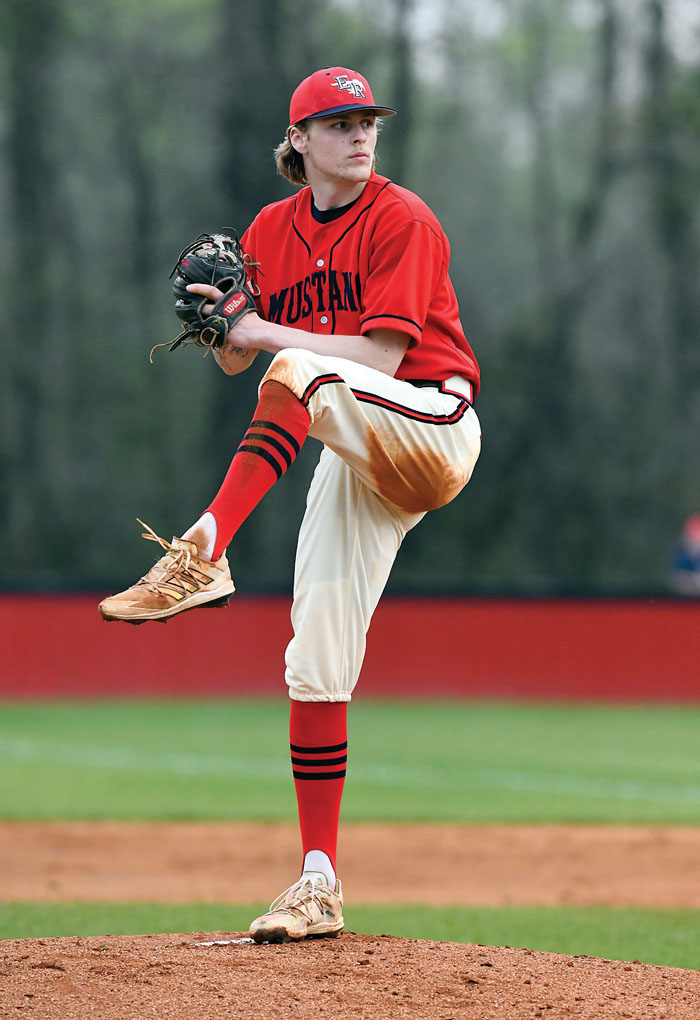 East Rowan pitcher Cameron Padgett fires to the plate during a game against South Rowan earlier this season.photo by Wayne Hinshaw, for the Salisbury Post

SALISBURY — East Rowan’s baseball team, second in the final 3A West RPI rankings, is only the No. 9 seed in the 3A West playoff bracket.

That’s the system. Everyone knew it was going to happen.

Everyone knew going in how much was riding on last week’s East Rowan-South Rowan South Piedmont Conference Tournament championship game. South won it 5-2 on a Nathan Chrismon three-run homer, a blow that may still be echoing when this season ends.

All the conference champions had to be seeded ahead of East in the playoff bracket. That’s how it works. That’s why the second-best team is seeded ninth.

But No. 9 seed or not, East is still East, powerful hitting and powerful pitching, winners of 23 of 27 games against a brutal schedule.

The Mustangs are expected to send Cameron Padgett (10-0) to the mound tonight at Staton Field at 7 p.m. against 24th-seeded North Gaston, which has an 11-10 overall record and went 8-6 in the Big South Conference.

The folks at South, East and West can’t be completely thrilled with the way the 3A West bracket shook out.

If you’re South, you’re certainly pleased with a well-earned No. 1 seed for the entire bracket and a potential wave of home games, but No. 16 West Rowan and No. 9 East Rowan fell in the same small cluster in the bracket.

South’s most likely path forward is going to require the Raiders to beat West Rowan for the fourth time just to get past the second round. Yes, South will be favored, but West is no picnic. South survived their most recent meeting 5-4.

Assuming South, which has one of the better defensive teams in county history, can get through the Falcons (or South Point), it’s highly probable the Raiders are going to be squaring off with East Rowan again — and this time it’s going to be Padgett on the mound — in a potential game of the century in the third round. Yes, one more game of the century.

In a perfect world, another East-South matchup wouldn’t happen until we were well down the road with the playoffs, but that sensational scenario could become reality early next week.

But keep in mind there are no sure things in baseball. These early playoff rounds are one-and-done, and a lot of stacked Rowan County teams have gone down in the first or second round. That 13-13 team you’re playing might have a Division I arm on the bump, and he can beat you. Pitching is 75% of this game.

Nothing has been said yet about South Rowan’s first-round game with West Charlotte. It’s an unusual one because it’s unusual for a 3-20 team to be in the playoffs, but that’s one of those things that can happen in a split league. West Charlotte and West Meck are the 3A schools in a mostly 4A Charlotte league. Both went 1-11 in league play and split with each other. The Lions somehow got the nod over West Meck, perhaps because of a drawing.

In the final 3A West RPI rankings, West Charlotte was rated 55th out of the 55 3A West teams. That’s last. To put that in perspective, Statesville went 0-19 and was rated 50th.

Long story short, South is expected to win pretty routinely tonight. It would be victory No. 23 this season, tying the current Raiders with the 1996 team for the most wins in school history.

First pitch at South will be at 6 p.m.

The 3A West bracket created a mission-impossible situation for West. OK, Falcons, all you have to do is beat South Point, beat South Rowan and beat East Rowan… and now you’re in the fourth round.

The Falcons will take their best shot, but one game at a time. South Point is always tough in any sport. First pitch tonight is at 7 p.m.

Northwest Cabarrus, which tied for third in the SPC with West Rowan and Carson, is seeded 18th and plays at No. 15 Oak Grove. … Davie made the 4A West bracket as the 29 seed and will make the road trip to No. 4 Sun Valley. … In 1A West, Gray Stone is seeded 21st and plays at No. 12 Christ the King. …  Salisbury just missed making the 2A West bracket.

In the softball world, West Rowan is the only Rowan team that was granted a first-round home game.

The 12th-seeded Falcons (19-5), led by sophomore slugger Emma Clarke, will tee it up at 6 p.m. tonight against No. 21 seed Eastern Guilford (17-6) in what should be an interesting first-round matchup. Hopefully, Eastern Guilford has never heard of Emma Clarke.

If West gets past the first round, the Falcons can expect to be facing Central Cabarrus for the fourth time. Fifth-seeded Central Cabarrus is the only 3A team that’s beaten West this season. The Vikings have done it three times. Two of those were one-run games. Neither the Falcons nor the Vikings can be thrilled with the possibility of a fourth matchup so early.

• Carson (13-11) is the No. 18 seed and plays at West Henderson (18-3), which has a surprisingly lofty record for a No. 15 seed. West Henderson finished second in its league behind Smoky Mountain. First pitch is at 6 p.m.