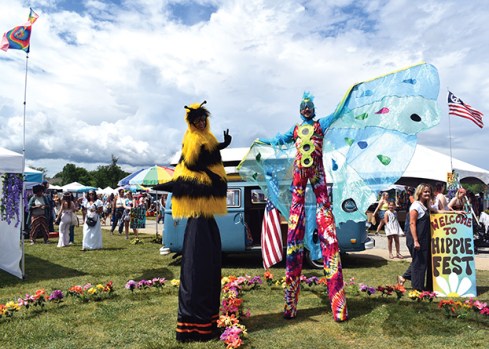 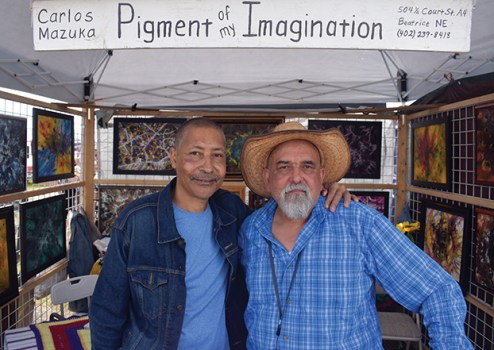 Edward Robinson, left, and lifelong friend Carlos Mazuka reunited at Hippie Fest on Saturday. The two had never been to Salisbury before, but decided to make the festival a fun meetup. Mazuka was selling his paintings at the festival. Ben Stansell/Salisbury Post 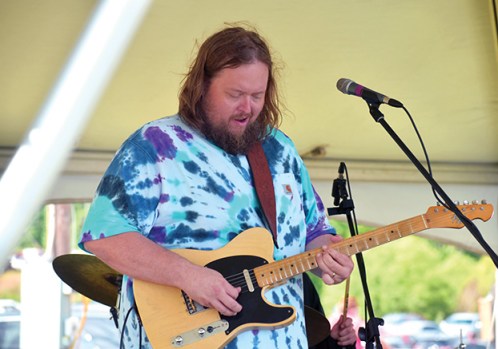 From the time patrons entered the fairgrounds to the time they left, live music was all around at Hippie Fest. In this photo, a guitarist becomes one with his instrument during a solo. Ben Stansell/Salisbury Post 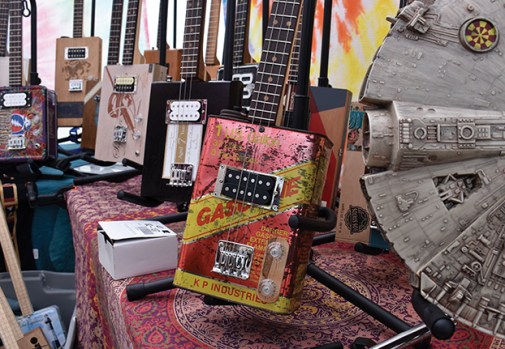 One vendor was selling string insturments of all shapes and sizes, including this one made out of an old gasoline can. Ben Stansell/Salisbury Post 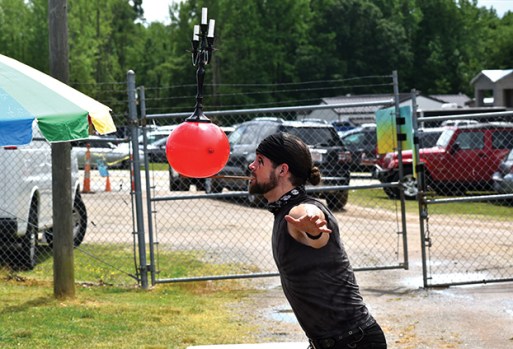 SALISBURY — Tie dye took over the Rowan County Fairgrounds on Saturday and Sunday as thousands of bohemians flocked to Hippie Fest for good art, good entertainment and good vibes.

The traveling festival returned to Salisbury over the weekend for the opening of its 2022 season. The family-friendly event has made Salisbury a stop since it started about seven years ago. With somewhere between 7,000-8,000 people estimated to be in attendance, this weekend’s turnout was the biggest ever.

“This has been our busiest one here,” said Marci Beebe, who spent most of Saturday taking tickets at the entrance.

For two lifelong friends, the Hippie Fest proved to be the perfect reunion.

Carlos Mazuka, selling his art in one of the vendor tents, drove about 17 hours from his small southeast Nebraska town to be at the festival. Edward Robinson flew from Spain to his Raleigh home before driving down to Salisbury. The flight was 14 hours.

“Worth every minute of it,” Robinson said. “Hey, I’d swim from Australia to be here with Carlos.”

Mazuka and Robinson spent the summers of their childhoods together in Vacaville, California, which sits between Sacramento and San Francisco. For most of the year, Robinson lived further in San Diego, but he spent the months he was out of school with his grandparents. The duo, separated in age by two years, made the most of their time together.

“We grew up running the farm fields of Vacaville and I used to steal chickens from (Mazuka’s) chicken coop,” Robinson said. “We used to go crawdad fishing, hunting all of the time.”

As they grew older, they both went their own ways. Robinson played collegiate basketball before going overseas to make a go of it as a professional point guard. Mazuka majored in accounting at Sacramento State and started working for the state government as an analyst and auditor.

While Mazuka stayed in his home state, Robinson became a globetrotter. After wrapping up his playing career, he became a teacher and then administrator at American Schools across the world. He’s lived in 11 countries and visited more than 60. In South Africa, Robinson said he met with Nelson Mandela to discuss spreading educational access.

No matter where he went, or what time zone he was in, Robinson always called Mazuka whenever he needed a friend.

“As (Robinson) has traveled around the world, he’s made me a part of his travels,” Mazuka said. “He’s called me from every country you can imagine — 24 hours a day. There’s no day or night for us.”

The two have always tried to get together when they could, and they found the perfect excuse thanks to Mazuka’s second career as an artist. About 15 years ago, Mazuka said he developed a skin condition doctors couldn’t diagnose. Never an artist before, he suddenly found painting to be therapeutic. As soon as he completed his first piece, he told his wife he wanted to paint for the rest of his life.

“I started painting and I haven’t stopped,” Mazuka said.

Instead of putting down regular brushstrokes, Mazuka developed his own technique of putting paint on paper. Mazuka is inspired by deep space photographs. It comes through in the abstract paintings, which are perfect for a Hippie Fest.

Mazuka has sold and given away his paintings in hotel lobbies, truck stops and festivals across the country. He estimates he’s completed 5,000 paintings thus far and aims to finish several thousand more by the end of his life.

Mazuka attended Hippie Fest when it stopped in Omaha, Nebraska, and enjoyed himself. So, he decided to attend the festival’s season opener in Salisbury for the first time. When Mazuka told Robinson about his plan to come to North Carolina, Robinson booked a flight from Spain, where he happened to be at the time.

On Saturday, Robinson transformed into Mazuka’s most passionate salesman. He beckoned people to walk into the tent to check out his friend’s work, pointing to paintings and repeating the line: “You know what’s missing from your living room?” Throughout the day, Mazuka added names to a growing list in his notebook of people who have taken home one of his pieces.

Mazuka was one of dozens of vendors at the festival. Vendors sold everything from paraphernalia to jewelry. One artisan was selling string instruments of all shapes and sizes, including one shaped like the Millennium Falcon from the Star Wars franchise.

Bands performed throughout the day and a juggling act tossed fire in the air. Between a sunflower wall and a giant fluorescent mushroom, there were plenty of good spots for pictures. Volkswagens dressed in stickers were scattered throughout the festival, many of them open for people to explore. While the weather fluctuated from rain to sunshine, patrons didn’t let that stop them from partaking in the groovy atmosphere.

Hippie Fest will make a stop in Trufant, Michigan, next before moving onto Ohio, Nebraska and Indiana. The traveling show will return to Salisbury on the weekend of Oct. 22-23.

Mazuka and Robinson plan on being there.