Written in the stars: China Grove woman receives surprise 23 years in the making 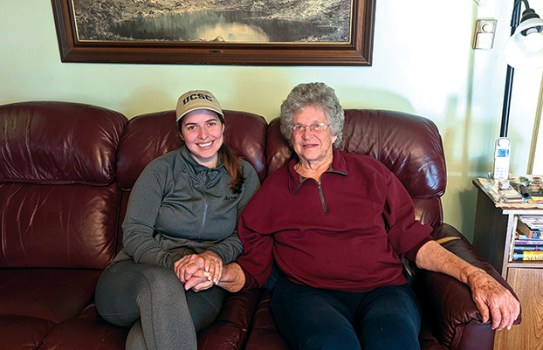 Pranvera Hyseni, left, surprised Thelma Archer at Archer's China Grove home last month. Hyseni was there to thank Archer for sending a care package to her in Kosovo 23 years ago. Photo submitted. 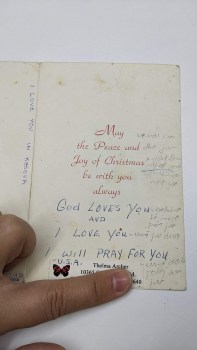 Pranvera Hyseni kept the card sent to her by Thelma Archer more than two decades ago. The return address led to their recent meeting and gave Hyseni a chance to thank Archer. Photo submitted. 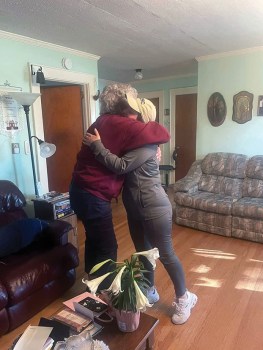 Pranvera Hyseni and Thelma Archer hug during their visit. The moment was special for both. Hyseni got the long-awaited chance to thank Archer in person and Archer learned how much an act of kindness meant to a stranger 23 years ago. Photo submitted.

CHINA GROVE — When Thelma Archer heard a knock at her door one evening last month, the unanticipated noise brought her cautiously to her feet.

It was a few days after Easter and the spry 91-year-old wasn’t expecting company at her China Grove home — much less a surprise 23 years in the making.

Wary but curious, Archer propped open her storm door just a crack. Through the sliver, she looked out to see a young woman standing on her porch.

“She looked like she could’ve been a granddaughter,” Archer said.

What the young woman said next still has Archer’s head spinning: “You don’t know me, but I’m here because 23 years ago I received a shoebox from you.”

The young woman held up a simple Christmas card with a short note scrawled underneath the printed message.

“God loves you and I love you. I will pray for you.”

Archer recognized the handwriting as her own.

Bewildered, Archer opened the door wide and invited the young woman into her home. Archer spent the next several hours listening to the miraculous story of the woman who she had such a profound impact on with a simple act of kindness more than two decades ago.

‘It’s just something you did every Christmas’

Archer has lived in her current home for almost seven decades, but she’s lived “in the country” her entire life. With five brothers, Archer was the only girl in a farming family. No one told her father that.

“My dad had 138 acres here and he never knew I was a girl,” Archer said. “I did everything from milking cows and hauling hay and plowing and cutting down trees. Anything a man has done, I did.”

Archer’s work ethic stuck with her.

After she put her five children on a school bus, she watched over other people’s toddlers throughout the day. When her own children slept at night, Archer worked in textiles. To make extra money here and there, she catered weddings and did sewing work.

Never rich, Archer did the most with what she had.

“I had big gardens out here. I would fill two 18-foot freezers and oftentimes when all my children were here I’d can 500 jars because I’d can grape juice, apple juice, tomato juice, besides all the vegetables and things,” Archer said. “I’d raise my own chickens and put them in the freezer.”

Still, Archer always found ways to be generous and help others. Every Christmas, she participated in Operation Christmas Child through her church, Mt. Mitchell United Methodist. Samaritan’s Purse, a global evangelical Christian charity, provided members of the congregation with empty shoeboxes. It was up to the churchgoers to fill them with goodies.

“As far as I remember, I usually tried to put in maybe two toothbrushes, a big tube of toothpaste, bar soap, maybe two washcloths, a small toy and a small game of some sort, a Bible study book, ” Archer said. “You couldn’t put too much in a shoebox.”

Once the box was packed, Archer filled in the little space that remained with candy — lots of it.

“I had stuffed every little crack in that box with hard candy,” she said.

Over the years, Archer estimates she and her family packaged more than 100 shoeboxes.

“It’s just something you did every Christmas,” Archer said.

Archer slipped holiday greeting cards in each of the boxes. Even though she didn’t know if the recipient could read English, she scribbled a personal message anyway.

When the shoebox was completely stuffed, Archer sent it back to Samaritan’s Purse. The charity distributed the boxes worldwide. The list of possible destinations now includes more than 100 countries. In the late 1990s, Samaritan’s Purse sent loads of shoeboxes to Kosovo. At the time, the war-torn Balkan country was emerging from a battle for independence from Serbia and the Yugoslavian government. The fight left the country scarred.

Archer didn’t really know it, but that’s where one of her boxes was headed in 1998.

‘To me, that means the world’

Pranvera Hyseni was born and raised in a small agricultural community near the town of Vushtrri in northern Kosovo. Hyseni and her five older siblings all helped out on her family’s farm.

“I spent my whole childhood looking after the cows, working out on the farm and in the fields,” Hyseni said.

Growing up in Kosovo in the wake of the war was difficult.

“I was three years old when the war happened. Right after the war, the country was just torn apart,” Hyseni said. “It was not very easy because a lot of people got their property burned down.”

One bright spot came when Hyseni, now 27, was about 4 years old and her school received a shipment of shoeboxes. She still remembers opening a box filled with candy and toys — items she’d never seen before.

“For me, I didn’t have anything,” Hyseni said. “Not even toys or candy back then. We didn’t get any of those because we couldn’t find them and of course for a lot of us children we weren’t rich.”

She couldn’t read the card that came in the box, but she kept it anyway. Over the years, she received more shoeboxes full of special gifts. Each time she saved the card and placed it on a bookshelf in her home.

“They came from people who cared for me and they didn’t even know me,” Hyseni said. “From strangers who simply shared love and care with people across the world. To me, that means the world.”

Around the same time Hyseni received the first shoebox, she had another pivotal experience. On Feb 26, 1998, the moon passed between the earth and the sun. While other Kosovans were frightened by the total eclipse, Hyseni’s grandfather went outside and filled a bucket with water. He told Hyseni and her siblings to look at the reflection to see the astronomical event without risk of eye injury.

“It was the sparkle that got me interested in the sky and such phenomena,” Hyseni said.

Hyseni remained interested in astronomy, but majored in geography at her Kosovo college because it was the closest course of study offered. But when she got the opportunity to earn a master’s in planetary sciences from the University of California Santa Cruz in 2020, she jumped at the chance. During a pandemic, she moved from her home country to San Jose, California.

She brought those cards with her.

‘My head was spinning’

After finishing her master’s program last month, Hyseni decided to do some traveling before starting on her Ph.D in planetary science. Not only did she want to explore the other side of America further, but she wanted to fulfill a goal she’d had since she was 4 years old.

Hyseni flew to New York and began a road trip south. She made stops in Philadelphia and Washington, D.C., before visiting Virginia Beach. From there, she punched in the return address listed on the very first shoebox card she received. She steered her car toward China Grove.

Hyseni didn’t arrive in the southern Rowan County town without first doing her homework. Using her best detective skills and Google, she determined that the home where she was headed was still owned by the same woman whose name was on the card.

Still, it was a roll of the dice for Hyseni to show up to a stranger’s house unannounced and tell them that she’d been planning to meet them for the past 23 years. But that’s exactly what she did.

Hyseni knocked on the door, but didn’t get a response at first.

“I drove all the way from Virginia Beach to China Grove especially to knock on that door,” Hyseni said. “And at first, no one answered. Google told me it was an elderly woman living there, so I knocked a few times. I didn’t want to give up.”

Archer finally answered and was soon inviting Hyseni and her friend in for a visit.

This time, Hyseni was the one with gifts. She brought Archer a small gift bag with a thank you note of her own.

The two chatted for several hours. Archer listened to stories about Hyseni’s upbringing and journey to the states. She learned that the two women, separated in age by generations, had plenty in common besides just a shoebox.

“One thing we had in common, both of us worked in the field when we were young,” Archer said.

Archer wishes she’d asked more questions, but it was hard to wrap her head around what was happening.

“I didn’t find out as much because my head was spinning, my heart was about to pump out of my body,” Archer said.

“You know, I’ve done things for different people different times and I doubt if, two or three days later, they could’ve told you what I had done. Sometimes they don’t even thank you,” Archer said. “To have somebody who was 4 years old and that far away and they remembered all these years, it just blew my mind.”

For Hyseni, the meeting provided closure.

“It was an extraordinary experience just catching up with her and letting her know she did something incredible all the way back then,” Hyseni said. “I wanted her to know that I really appreciated that and I appreciated everyone else sending us presents. Of course, for these people it was not a lot. It was just a few things. But they had no idea how much of an impact they’ve made on other countries, not just Kosovo.”

After talking with Archer for several hours, Hyseni got back on the road. Her next visit was to a North Carolina church that had also sent her a shoebox.

“When (Hyseni) left, I said to my granddaughter, ‘I wondered why I’d been left here so long,’” said Archer, who will celebrate her 92 birthday in August. “I guess this was maybe one of the reasons to fulfill that young girl’s dream.”

Together, Archer and Hyseni recently participated in a video interview with a news station in Kosovo. They plan to stay in touch.

Archer may still be trying to make sense of it all, but she has taken at least one piece of wisdom away from the once in a lifetime meeting.

“Fill up those shoeboxes.”