‘It is a win for our entire community’: Rowan United Way recognized for work with major award 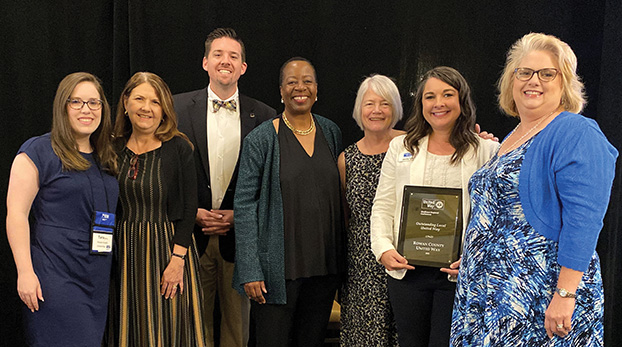 During the United Way Southeast Regional Conference held in Greenville, South Carolina, last month, the Rowan County branch of the global organization received the Outstanding Local United Way award. The new award is given to an organization that “shows measurable progress in improving the lives of those in their community by addressing their most pressing needs.”

Angela Williams, president and CEO of United Way Worldwide, was there in person to present the plaque in front of hundreds of United Way staff from across the Southeast.

“We were thrilled to accept this award in the presence of our United Way colleagues at the Southeast Regional Conference,” said Jenny Lee, executive director of Rowan County United Way. “It is a win for our entire community and we are so proud of what we are accomplishing together.”

Rowan County United Way was selected for the award over similarly-sized organizations in the United Way’s seven-state southeast footprint. The recognition was the culmination of years of work.

“It’s validation for everything we’ve been working so hard on over the last couple of years,” said Audrey Eudy, philanthropy director of Rowan County United Way. “It speaks to the strength of the United Way organization — the volunteers and donors — that we were able to make it through COVID and help so many organizations who then helped so many citizens who were in need.”

The Rowan County United Way’s four-person staff received the award alongside Board President Andrew Smith. Smith drove down to Greenville for the award presentation and he treated the organization’s staff to dinner the night before to celebrate.

Eudy said they accepted the honor on behalf of the many people who make the United Way’s efforts possible.

There were three main criteria for the award: meaningful growth in impact or revenue; improved community engagement in connections with community partners and key stakeholders; innovative and creative work in areas of need.

When preparing application materials for the award, Lee asked the Rowan County United Way’s stakeholders to provide examples of how the organization achieved each of those criteria. She was pleasantly surprised when most listed the organization’s new community impact model as one way the United way has had meaningful growth and impact.

“They all got behind that and it was a really proud moment for me because it meant that they were truly invested in the community impact model we have built and implemented over the last few years,” Lee said. “Even more so, they felt it has been truly beneficial to the community.”

The Rowan County United Way is currently in the process of selecting community partners for the next two years. Lee said last month she was expecting an influx of applicants for this round of funding. Her prediction proved true.

With the pre-application period now closed, 32 applicants have moved on for further consideration. Apparently, a lot of organizations are interested in partnering with an Outstanding Local United Way.