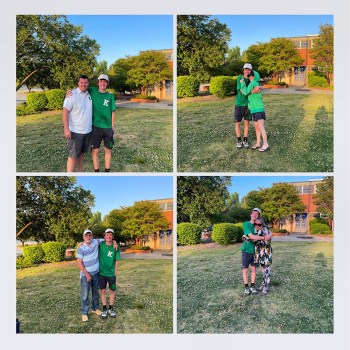 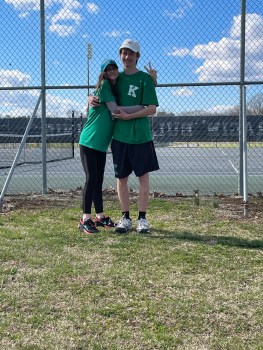 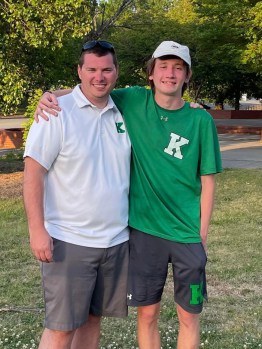 Back in the late 1990s, Gainey was a 5-foot ball of fire for the A.L. Brown Wonders, an individual state qualifier. She was a second team All-South Atlantic Conference player for the Catawba Indians in 2002.

On Friday, Gainey watched her son, A.L. Brown’s Jayden Wellman, compete in the 4A State Championships in Raleigh. The overwhelming sensation for her was pride. Pride with how he stayed humble with a first-round win. Pride with how he handled a season-ending loss.

Wellman rolled in his first-round match before dropping a tough one in the quarterfinals, but he’ll be back.

He’s a junior who hasn’t filled out yet. He could be a monster as a senior. He wants it pretty bad, and those guys (or girls) always have a chance to reach their goals, no matter how high they set the bar.

“Well, when you get to the states, everyone is really good,” Wellman said.  “You’re pretty nervous because there’s not going to be an easy match with anyone who made it there. I’m still improving, still learning, so I’d rather lose a hard one than win an easy one. That’s how it’s always been for me, and I think that’s why I’ve gotten better.”

A.L. Brown hasn’t been heard from in tennis at the state level in a generation. Back in Gainey’s day, there also were some guys at the school who could really play. In 1998, Reid Chaney and Jess Rutledge teamed up to win the 3A state doubles championship.

A.L. Brown’s girls haven’t been in the dual team playoffs since 2004.

That drought gives you an idea of just how unusual a talent Wellman is. Kannapolis lacks the tennis tradition of neighboring schools such as Concord and Salisbury.

Wellman’s advantage over his peers came in having a mother and a grandfather (Steve Gainey) who could teach him the ins and outs of the game at an early age. He was swinging a racket with a purpose before he could read and write.

“In those early days, I’d just go hit with the family,” Wellman said. “We’d try to find an open court somewhere and we’d play for maybe a half-hour, an hour, whenever and wherever we could. I grew to love the game, and it became important to me to carry on a family tennis tradition. It’s been a winning tradition.”

Wellman won his first USTA tournament in Mooresville when he was 12.

He arrived at A.L. Brown as a freshman eager to do big things, but that was the 2020 season that was stopped after a handful of matches by COVID. He didn’t play school tennis in 2021, but he continued to work out diligently with Mark Allen, the pro at Concord’s Sports Center Tennis Club.

He improved dramatically, but he was still something of a mystery man when he returned to the courts for the Wonders this season.

A.L. Brown’s opening match was against the strong South Rowan team from a few miles away. The Raiders won 7-2.

The Wonders’ points came at No. 1 singles — Wellman won 6-0, 6-0 against Joey Caraccio, one of the best in Rowan County and a 3A state qualifier. Wellman and partner Steben Velasquez also won a scrap at No. 1 doubles.

“Joey is a very good player with a big serve,” Wellman said. “But I had a good day. It was a great way to start the season.”

The Wonders play in the 4A Greater Metro Conference, a stout league, especially Lake Norman and Cox Mill.  The Wonders didn’t win a single dual-team match, but Wellman lost only once during the regular season at No. 1 singles. That setback was to a player who proved to be his nemesis — Lake Norman junior Walker Valentine, who was undefeated this season until the 4A Midwest Regional and finished in the state’s top four.

“I lost four matches all season and three were to Walker Valentine,” Wellman said. “He’s my Kryptonite. I just haven’t figured out how to beat him yet. The good news is I’ve gotten closer each time we’ve played.”

The four best from the Greater Metro, Central Piedmont, Metro (Guilford County) and Southern Carolina (Union County) convened at Grimsley High in Greensboro for the regional. Only four of those 16 players would be moving on to the state event.

It was an ordeal. Wellman survived it, placing third.

The critical match was his win in the quarterfinals against one of the Metro representatives. That victory put him in the regional semifinals and punched his ticket for the state tournament.

“We got the whole regional experience in that one match,” Wellman said. “Three sets and three hours. It was getting dark when we finished.”

The next day, his third-place match with Mount Tabor standout Adam Cartwright took more than two hours. Wellman pulled that one out as well.

Just making the state tournament made it a highly successful season for all those who were there, but Wellman wanted more. His 6-4 and 6-4 second-round loss to Pinecrest’s Marshall Landry (who finished as state runner-up) was disappointing, but not deflating.

“I couldn’t be mad about how I played, but that was an opponent with a lot of weapons and no weaknesses,” Wellman said.

Wellman doesn’t look like a star at first glance. He looks like the kid next door who mows your lawn.

He looks like a natural cross country runner, but he said his second-favorite sport is basketball — same as his mom’s. She used to hoop some for the Wonders after tennis season.

“I’m just this skinny guy,” Wellman said with a laugh. “I’m not going to overpower anybody, but I will try to out-smart you and I will try to use the whole court. I think I’m pretty creative — I can hit any shot there is — and  I’m tenacious. I never give up, no matter how far I might get down, and I’m going to battle for every point. I’ve learned to take advantage of the short balls, learned to take advantage of any ball that floats. A combination of creativity and tenacity and playing smart  can take you a long way.”

It took him as far as you can go this season. Top eight in the top classification in the state is nothing to sneeze at.

The goals for Wellman’s senior season: Get back to state, help the Wonders win a dual-team match, find some way to beat Valentine.

Wellman is rated as a 2-star recruit, although he’s held his own with 3-stars and has beaten quite a few of them.

His dream is to get a tennis scholarship. He’s an excellent student, so there’s no reason he won’t get an opportunity. He’s open to any level. He just wants to go somewhere where he can study hard and play hard and the team has a chance to win.

Wellman said he’s had come-join-us overtures from players at other high schools with deeper tennis programs than the Wonders, but he’s not planning to move. He’s liked playing for A.L. Brown and for coach Garrett Deal and he’s enjoyed playing doubles with Velasquez.

Basically, the kid bleeds green and white, just as his mother did a generation ago. Apples don’t fall far from the tree.

“I do like being a Wonder and I’m proud to be a Wonder,” Wellman said. “It’s fun playing for A.L. Brown because sports are so important to this school.”

Tennis got a little more important for everyone in Kannapolis over the weekend.

Wellman’s favorite subject is history — and he made some.