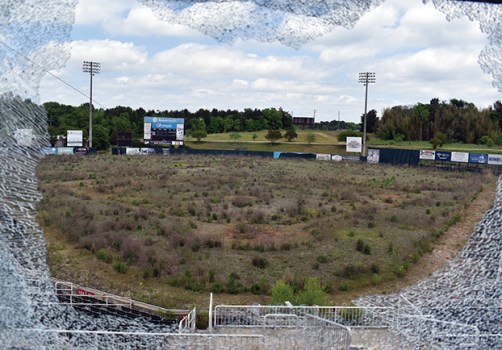 The view from the press box of the former Intimidators Stadium. The old diamond outline is barely visible in the overgrown grass. Ben Stansell/Salisbury Post 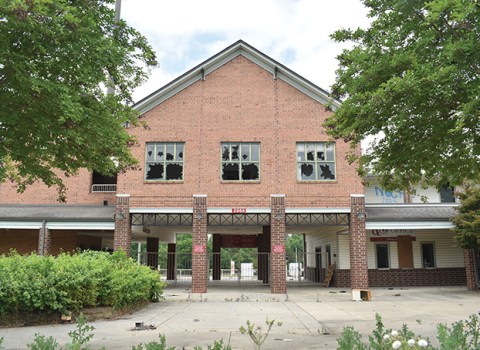 The vandalism of the stadium is clear from the outside. Ben Stansell/Salisbury Post 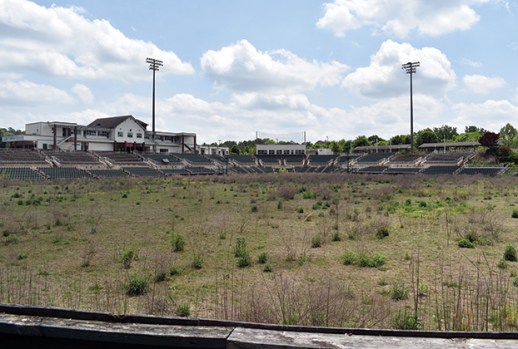 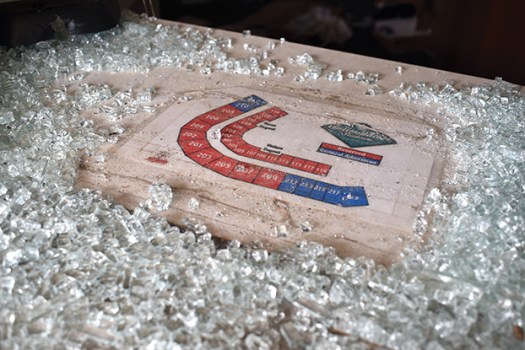 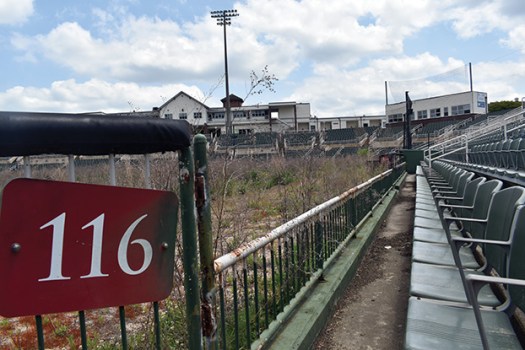 The view down the third base line. Ben Stansell/Salisbury Post 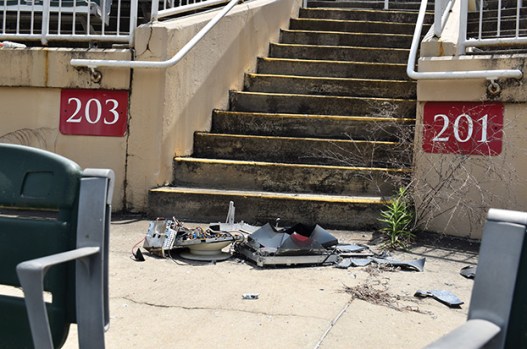 Debris is scattered throughout the stadium. Ben Stansell/Salisbury Post 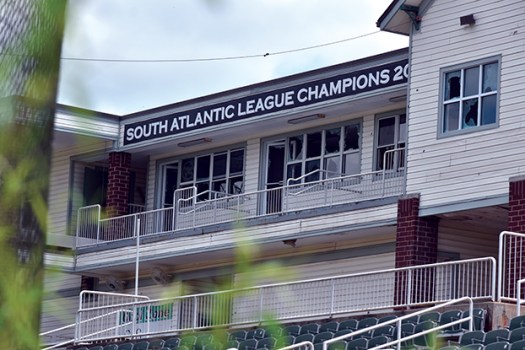 Almost every glass window in the stadium has been shattered, from the box office to the box seats. Ben Stansell/Salisbury Post 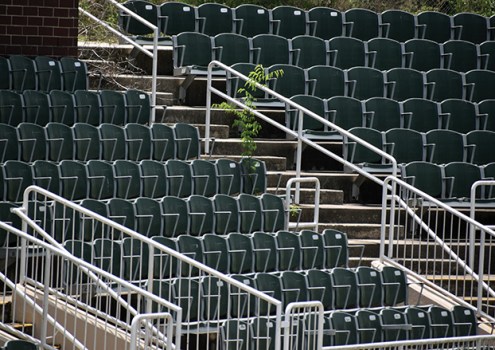 The only fan in the stands. Ben Stansell/Salisbury Post

KANNAPOLIS — Once a place where fans gathered to watch baseball, the Kannapolis Intimidators Stadium now resembles a scene from a post-apocalyptic world in which the zombies don’t care much for America’s pastime.

The former home of the minor league team has become the bizarro version of the new ballpark in downtown Kannapolis where the city’s rebranded Cannon Ballers are currently playing their second season.

Almost every pane of glass in the old stadium is shattered. The outfield has become an actual field where shrubs and weeds are starting to grow several feet high. Any “no trespassing” signs have been ignored and items left behind are splayed on the concourse.

The Moose Road stadium won’t look left for dead much longer. Concord-based Fortius Capital Partners is preparing to demolish the ballpark once it closes on the purchase of the property from the city later this month.

“I know there’s no future use for the building, but it’s sad to see it at its current state and I’ll be the first to admit that,” said Dave Davis, director of development for Fortius Capital Partners. “We are excited to introduce the next chapter of that story soon.”

In the old ball park’s place, Fortius will build Lakeshore Corporate Park. The company plans to construct three speculative buildings ranging in size from 128,000 to 295,000 square feet for a total of 702,000 square feet of commercial space. According to the Fortius website, the “concrete tilt-up buildings will boast up to 36’ clear height, abundant dock-height doors, professional storefronts and interstate visibility – all in a park setting.” The company will invest more than $50 million in the development.

“We are really thrilled to be a part of this project and to be pushing it through,” said Harris Morrison, managing director of Fortius. “We are thrilled to be a part of the renovation of such an important part of Kannapolis’ community. We believe that this is going to attract all different types of good industry that are going to bring jobs to the area and increase the local tax base.” 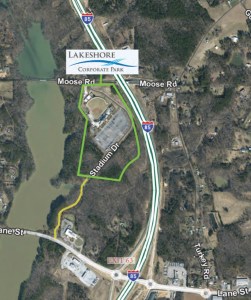 The future location of Lakeshore Corporate Park, which is being built on the former home of the Kannapolis Intimidators.

The buildings will be marketed to companies in the manufacturing, warehousing, distribution, logistics and light assembly industries.

“We design the park with an ability to market it to a wide and diverse range of prospects,” Davis said.

Three acres of the site will be reserved for the city to construct a fire department, but no formal timelines for that project has been established.

The industrial park is a prime location due to its proximity to exit 63 on I-85. Major parcels adjacent to the interstate are becoming increasingly rare as companies continue to lock up land in Rowan County and the greater Charlotte region.

“The market is scrambling for additional space and it’s just trying to find the available land to deliver that product type,” Davis said. “The rings are getting further and further out from Charlotte itself. The overall growth of the Charlotte market is just such a driving force.”

A rendering of what a building at Lakeshore Corporate Park may look like.

The Kannapolis City Council unanimously approved selling the property to Fortius for $3 million in May of last year. Since then, Davis said the company has been doing its due diligence to survey the site for any potential barriers to construction. Planning is particularly important for this project, Davis said, because the property is next to Lake Fisher, a protected water reservoir.

“It’s technically in a critical watershed, which puts a certain set of additional restrictions on how the property can be utilized and what impervious land percentage area is available so we’re having to work within the restraints of that too,” Davis said. “It takes a lot of coordination and continued effort.”

The built upon area of the industrial park will comprise a little over 33 acres of the 55-acre site.

In the time that the ballpark has been awaiting its future, vandals have ransacked its offices and defaced walls with spray paint. The incident is one reason why Rowan-Cabarrus Community College moved its truck-driving training classes from the vacant stadium parking lot to West End Plaza in Salisbury.

Davis said he anticipates the demolition process to start within the next 45 days. He acknowledges that a baseball stadium will prove to be a “unique animal” to demolish. Once the site is cleared and graded, progress will start on construction of the three speculative buildings. All three will be built in a single phase.

“We’ll have a very active site through about next summer,” Davis said.

Fortius anticipates delivering the buildings by summer of 2023, but Davis said that’s more of a moving target due to current supply chain disruptions and the unpredictability of mother nature.

When the project is complete, Davis said the “first rate” corporate park will be an asset to the community.

“What we strive to do is help our community prosper,” Davis said. “We’re adding to the tax base and we’re hopefully adding economic generators and employment generators and that’s of the utmost importance to us.”