Clyde: A rose by any other name 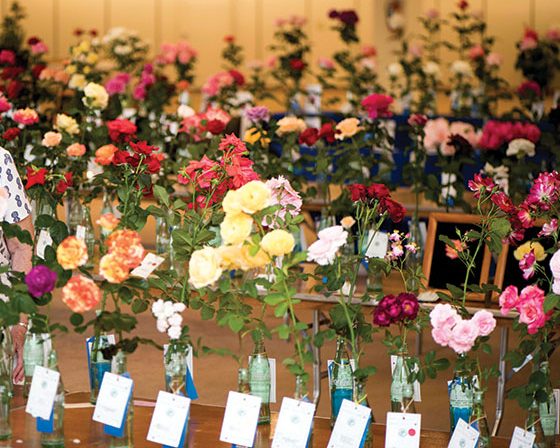 Show me an old house place and there will always be a forgotten rose bush alongside the porch. There amongst the lingering candy tuft and the powder blue thrift; where the walk used to be. Who planted it and where are they now? From “The Flowers of Life” in 1818 Samuel Woodworth mused

“Though I find not a rose, I indulge not in sorrow,

But pluck with contentment a daisy to-day;

Nay, even a sprig will feed hope for the morrow,

The humblest that nods to the zephyr of May.”

Nothing smells like a rose; take a long breath, next to the asexual stamens. Shakespeare surmised

“The rose looks fair, but fairer we it deem

For that sweet odour which doth in it live”.

The earliest roses from the Fertile Crescent were imported to Rome from Egypt for Rosalia on the twenty-third of May. A rose suspended over a banquet couch meant that the guests conversation was “sub rosa.” Redouté listed 170 cultivated roses. By 1848, some 1,500 different cultivars were offered for sale by William Paul.

Today, 70% of grocery store roses come from Columbia or Ecuador, loaded with pesticides. Handmade red or white corsages for Mother’s Day are passé. A dry conserve made from rose hips was good for “fainting, swooning, weakness and trembling of the heart.” Who could resist gathering ye rose buds while ye may or being a bride with rose petals strewn at your feet?

How many poems and love letters could not have been written without the perfect rose. Not to be confused with rosé, Bob. Pshaw! Pick perhaps the pervasive perfumed posey perchance to provide plucking a proper paraleipsis penniless paramour.

In the Bible no true roses are found except the Lebanons, but there are lots of thorns mentioned. “The way of the sloth for man is a hedge of thorns” (Proverbs 15:19). Briars and nettles are in the family of brambles related to the rose. “As a thorn goeth into the hand of a drunkard” (Proverbs 26:9).

Compare the blossoms of the raspberry, dewberry or the blackberry before the last frost. Those briars, Old English from brer, meaning sharp point, are the same ones as in the “brar” patch. Nettles, you guessed it, means twisting together like in spinning fibers.

The multiflora rose was introduced as fencing for farmers but it became invasive. Rosalie must have thought she was named for the Dr. Van Fleet rose. From Watsontown, he lived in a socialist Utopian community and introduced the most popular climbing rose in 1923, the first to hold a patent on a plant. At the Rowan Rose Society Show at our Civic Center next weekend, you can see eye-catching heirloom specimens, á peindre, worth painting.

You can remember Antique Rosarians, past and present, like Baxter and Doris Morgan, Clyde Harris, Ray and Martha Stout, John and Becky Lowery all in full bloom in heaven. You can thank Ben and Francis Agner who do all the hard work at the Rose Triangle planted circa 1976. Look for the thornless Lany Banks named from the wife of Sir Joseph Banks of Kew Gardens who sailed with Captain Cook on the Endeavour. Growing 20 foot tall, from Gansu, China who one English parson said she was better against a wall than in a bed.

The flowers of moss roses are produced in “large clusters of deep amaranth buds that are covered with bristly, fragrant green moss.” Whether you own a miniature in a pot, inherited a hybrid tea garden with a pergola, trellis or fence, or a trailing 20-foot high climber on the 2-story veranda or just a cheap knock-out that Yankees like to plant and chop; your attention is required for eternal vigilance.

Next time you go to the garden alone, while the dew is still on the roses, take time to bend over or even take a knee. In the metaverse or in reality, have you smelled a rose today? It’s like none other than ever known.

Clyde is an artist in Salisbury.