It’s all coming together: Raiders playing their best baseball at just the right time 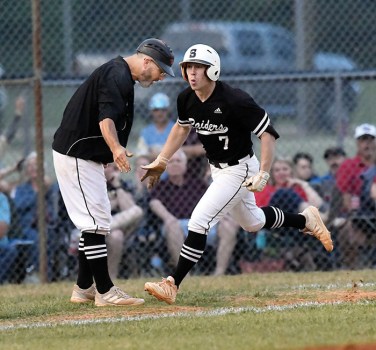 South's Nathan Chrismon celebrates hitting a three-run home run with his dad, Thad, as he rounds third base. photo by Wayne Hinshaw, for the Salisbury Post 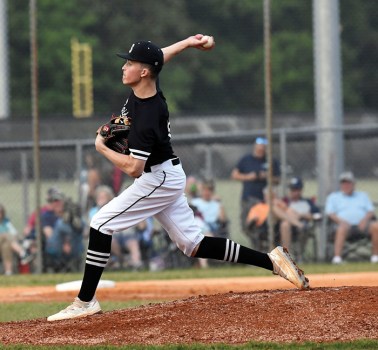 The words kept noodling around Thad Chrismon’s head Thursday night as his South Rowan baseball team tied a bow on its SPC season, winning a championship-game thriller against top-seeded East Rowan. It was here, at the conference’s Boardwalk/Park Place intersection, that the bold and efficient Raiders coupled a series of small, significant plays with one momentous swing to claim a No. 1 perch in this week’s 3A-West state playoffs.

“Everything will go through here,” Chrismon chirped between smiles at South’s boutique home field. “That’s what this game determined.”

That and a whole lot more. South 5, East 2 converted a few more non-believers and demonstrated SR’s season-long knack for rising to the occasion. The Raiders are an uber-confident bunch, thanks largely to an eight-game winning streak, victories in 13 of their last 14 and a 13-2 record at home. Stats like that ain’t fish sticks, folks.

“It just comes from being prepared,” the 15th-year coach offered. “These guys practice extremely hard and prepare as well as any team I’ve ever had. That’s where the confidence comes from. The chemistry is because they all trust each other and love each other. They’re very good at preparing and being good teammates.”

South checked both boxes against East, the state’s fifth-ranked 3A squad before the first pitch. The Raiders respected — but weren’t necessarily fazed — by East’s .331 team batting average and its menacing, unbeaten right-handed starting pitcher, junior Chance Mako. They countered with their own unblemished hurler, senior Carson Crainshaw, owner of a filthy, well-sequenced cutter that kept the Mustangs stabled.

“He kept us off-balance and filled up the strike zone,” East coach Brett Hatley acknowledged matter-of-factly. “We couldn’t quite come up with that timely hit when we needed it. But that’s baseball.”

So was Crainshaw’s suitable-for-framing effort. The tall right-hander retired 10 of the last 13 batters he faced before tottering after 6 1/3 innings and 96 pitches, finishing with five strikeouts, one walk and just a single earned run allowed.

“He composed himself very well, but he always does,” said Jacob Ritchie, South’s sturdy, veteran catcher and someone who should know. “He handled the stress of this game with great care and gave us a chance to win. He really came through.”

Crainshaw was backed by an infield display that almost taxed belief. There was first-baseman JD James gloving Logan Dyer’s sharp ground ball and turning it into a 3-6-and-a-tagout double play to squelch East Rowan’s fourth-inning rally. “You either get the long hop or the short hop,” James said before dovetailing into a detailed recap. “I got the short hop, kicked the bag and made a good throw to second base. It was hit right at me, and if I throw that ball away, or if it gets through for a hit, that’s a big detrimental moment for us. But it’s a play I’ve worked on for about a year. It just shows that practice pays off.”

Shortstop Nathan Chrismon, the coach’s son, had a nonchalant reaction to the dazzling play. “Ah, it’s a play he can make any day,” he said with a sideways glance from those safecracker eyes of his. “We all have confidence in JD.”

Another highlight-reel play unfolded with East’s Aiden Schenck leading off the last of the sixth. His rocket-fueled grounder just wide of James was muffed by South’s first baseman, then pinballed toward second-sacker Ty Hubbard. Hubbard quickly recovered the ball and side armed a perfect feed to Crainshaw, covering at first for the out.

“I closed my glove too early,” James reported. “I booted it, but Ty was right there and Carson made the right play covering at first. That’s from something called PFP — pitcher’s fielding practice — and we work on it every single day.”

Then there was the game-ending double play initiated by third-baseman Colton Fisher — who snared a searing one-hopper off the bat of always-dangerous Cobb Hightower, forced a runner at third and fired across the diamond in the nick of time. Another routine play? Perhaps, but one that requires flawless execution.

Of course, none of these defensive gems would have mattered without Nathan Chrismon’s decisive three-run homer in the top of the fourth. With the score tied 2-2, the East Carolina signee turned his prolonged at-bat against Mako into an eight-pitch novella. After fouling hard-biting sliders off the screen and yanking tempting curves behind third base, Chrismon barreled a 2-2 fastball over the left-field fence, triggering a celebration that’s been three months in the making.

“That was such a big boost,” said Crainshaw. “It helped me loosen up a little and pitch with more confidence. It put us in a really good place. It got us here.”

So here they are, these always-ready, well-schooled Raiders — upholstered in black, red and white awaiting their next challenge. The playoffs begin Tuesday with a home game as their reward for getting it right so far.

“We’ll be prepared,” said Chrismon, the coach with 204 career victories printed on the back of his baseball card. “This group right here, we’re playing our best baseball at the end of the year. That’s what you want. The look in their eyes, their focus, their team chemistry — this is all coming together and it’s an awesome thing to be a part of.”