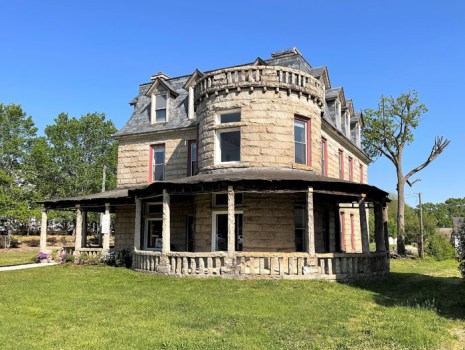 The Historic Salisbury Foundation purchased the circa 1896 Napoleon Bonaparte McCanless House at 619 South Main Street from Livingstone College in July 2019. After giving the house a thorough cleaning and repairing portion of the slate roof and columns, it sold the property to Sandra Toscano for reuse as a wedding venue in July 2021. Photo by Pete Prunkl 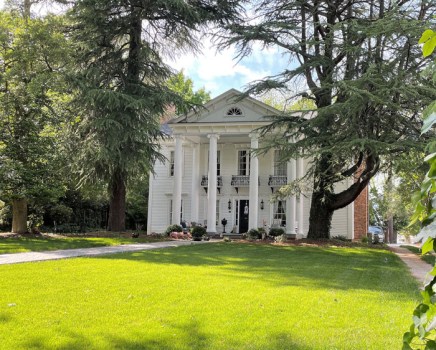 Since a 1984 fire, the Historic Salisbury Foundation made numerous but unsuccessful offers to buy the 1820 Fulton-Mock-Blackmer house at 112 South Fulton Street. In 2012 owner Jonathan Blackmer agreed to sell the house for its tax value. Volunteers worked to have the house presentable for the 2013 OctoberTour. Photo by Pete Prunkl 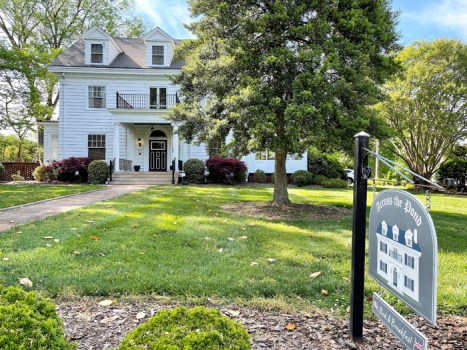 Kate Mills Snider donated her house, the 1919 Stokes-Snider House at 324 North Fulton Street to the Historic Salisbury Foundation in 2006. Kate Mills and her husband Arnold, who died in 2001, were charter members of Historic Salisbury Foundation. After minimal volunteer work, Mary and Andrew Walker bought the property in July 2013 and transformed it into Across the Pond Bed & Breakfast. Photo by Pete Prunkl 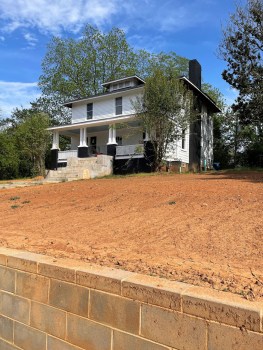 The owners of 1013 North Main Street property donated their house to the Historic Salisbury Foundation after a Christmas tree fire severely damaged the first and second floors. The house was stabilized by foundation volunteers and sold in March 2019. Photo by Pete Prunkl 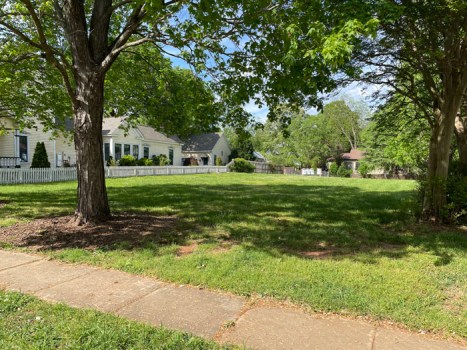 The Historic Salisbury Foundation owns this lot on the corner of Shaver and Bank streets in the Brooklyn-South Square Historic District. If an old house needs to be moved, this large area could be its new home. Photo by Pete Prunkl 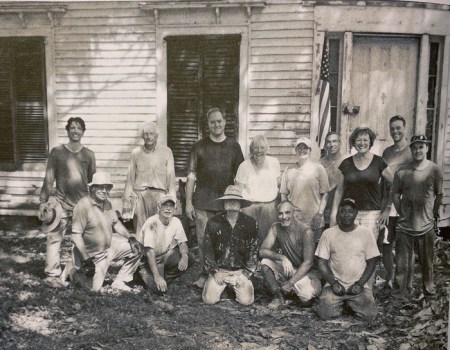 Black’s Brigade in front of the Mock-Fulton-Blacker House during stabilization. The late Doug Black (center with wide hat) was the leader of the all-volunteer group that went to battle cleaning, patching and painting this famous house. Submitted photo

SALISBURY — Every time Historic Salisbury Foundation buys an old house that is in danger of demolition, it takes a risk. Costs to purchase and stabilize the structure might exceed its resale value. In the fund’s 47-year history, losses were the exception, said Board President Steve Cobb. “We usually make a little bit on each revolving fund property,” he said. “The purpose is not to make a profit. It’s to save the house.”

The essential idea behind a revolving fund for historic preservation was outlined by Myrick Howard of Preservation North Carolina. It is “a pool of capital created and reserved for preservation with the condition that the money be returned to the fund to be reused for similar activities.” The money revolves — it goes out for House A, is returned to the fund when House A sells and is reused to buy and repair House B.

When Historic Salisbury Foundation started its revolving fund in October 1975, it had just completed its first house tour. Proceeds of $5,000 provided the necessary “pool of capital.” The foundation spent that money — and more — to move and stabilize the circa 1869 Robert Rowan Crawford House, known to locals as the Hamburger House. The Crawford House, which sat on the spot where Wendy’s is today, was donated to the foundation. The revolving fund helped pay a house moving company for the four days it took to slowly transport the Crawford House from East Innes Street through the streets of Salisbury to its new home at the corner of South Fulton and West Horah streets.

The foundation not only moved and stabilized the Crawford House, it also added protective covenants. The new owners agreed to complete the house restoration and continuously maintain, repair and preserve the property in accordance with the Secretary of the Interior’s Standards for the Treatment of Historic Properties. Every property stabilized and resold under the revolving fund program has covenants attached. Each year, the foundation and its volunteers inspect a portion of the revolving fund property to ensure the owners are abiding by the agreement. If the house is to be sold, the foundation has first right of refusal. These covenants also called easements, restrictions or agreements, follow the deed in perpetuity. In other words, future owners are bound by the same agreement.

Since 1975, the foundation has saved 122 properties through its revolving fund. Up until the latest housing boom and skyrocketing housing prices, several owners donated their houses to the foundation. All revolving fund properties whether donated or purchased are protected from demolition and inappropriate alterations.

Buying a house threatened by demolition does not always require a pool of capital. For several years, the foundation purchased a six-month option on a threatened house, not the house itself. During the option period, the foundation mobilized its corps of volunteers to clean, paint and patch the old house and prepare it for resale. Repairing windows was the volunteer’s specialty. When the six-month option was up, the foundation, the original owner and the new owner simultaneously closed on the property. The new owners were required by covenant to finish the restoration.

As the foundation and its reputation matured, it was able to buy a house using a line of credit from a bank. That was the way the foundation bought and stabilized the Fulton-Mock-Blackmer House in July 2012. The foundation and Jonathan Blackmer agreed on a price of $109,611 — its tax value. Community Bank of Rowan extended a line of credit to the foundation to purchase and stabilize the badly burned and vacant house. A week after purchase, volunteers descended on the old house and filled two industrial sized dumpsters with trash, bird droppings and debris. Black’s Brigade, led by the late Doug Black, patched, painted and repaired the house. The foundation hired Central Piedmont Builders to rebuild the back porch and porch roof and to stabilize the kitchen. Chad Vriesema of Central Piedmont Builders cut and reused old growth lumber salvaged from Grimes Mill for the rebuild. R. Glenn and Beth Dixon purchased the stabilized house in February 2014 for $150,000 and with the help of Alfred C. Wilson and Company, restored the house to its former glory.

Today, there are fewer threatened houses in Rowan County for the foundation to buy. Not only have the costs of houses and material escalated, but now the foundation has competition from “house flippers.” Even badly deteriorated houses are in demand in our current hot real estate market. For-profit renovators are not usually preservationists, however. They typically do not follow Department of Interior Standards or add the all-important protective covenants. Escalating prices have also curtailed house donations.

For its fiftieth year, the foundation has developed a new way to use its revolving fund. “We are looking to award repair and renovation grants of $1,000 to 50 homeowners,” said Executive Director Kimberly Stieg. The program is like the one offered by the City of Salisbury to property owners in its five local ordinance historic districts. The foundation’s grants are open to properties in Salisbury’s five National Register Historic Districts not protected by a local district. These districts are Livingstone College, Fulton Heights, Kesler Manufacturing Company, North Long Street-Park Avenue, Salisbury Railroad Corridor and Shaver Rental Houses.

Owners needing funds to renovate or repair their houses should check www.historicsalisbury.org for details on this new 2022 version of the venerable revolving fund.