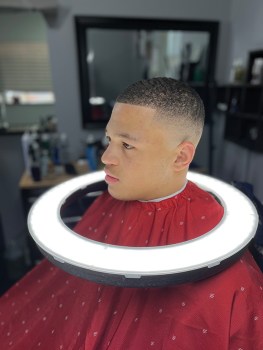 Jaden Gaither after receiving a haircut from Daniel King, who is providing the former Salisbury High School football star with free cuts and gear. Photo submitted. 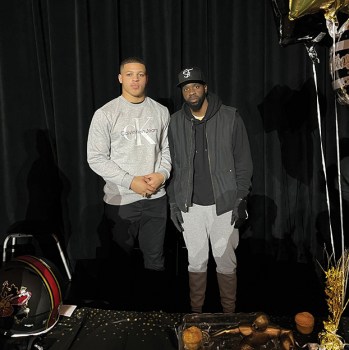 Daniel King, right, and Jaden Gaither have struck a partnership. In exchange for free haircuts and merchandise, Gaither will represent King's barbershop brand when he goes off to play football at UNC Pembroke. Photo submitted.

SALISBURY — The landscape of college sports was remade last year when the National Collegiate Athletic Association altered its rules to allow players to make money by leveraging their status as well-known athletes.

With the new Name, Image and Likeness rules — commonly referred to by the acronym NIL — athletes can now monetize their personal brands to a greater degree without fear of penalty from the NCAA. Since the floodgates were opened, players have wasted no time taking advantage of the new rules, or lack thereof. University of Alabama quarterback Bryce Young was said to have secured nearly seven figures in NIL deals even before he won the Heisman trophy in December.

A local athlete and his barber have decided to take part as well.

Jaden Gaither, a three-sport Salisbury High School athlete slated to play football at UNC Pembroke in the fall, struck a deal with Daniel King, a barber who works at Pure Vision Barber Studio in downtown Salisbury.

“I went to go get my haircut one day and we were having a conversation about NIL deals and he asked me if I wanted to do one with him,” Gaither said.

King, who goes by Smilezthabarber, will cut Gaither’s hair for free, provide him with gear featuring his branding and send him college care packages once he’s settled into his dorm room in Pembroke. King has a line of sweatshirts, shirts and hats that bear his logo and barber name. All Gaither has to do is represent King’s Smilezthabarber branding whenever he can.

“It’s to show people where he’s from and that I’m his barber when he comes home,” King said.

King has been cutting Gaither’s hair long before he was a 6-foot-1, 215-pound star linebacker for the Hornets.

“I’ve seen the transformation from him being little in elementary and middle school to being the size he is now,” King said.

Last year, Gaither had 92 tackles with 14 for loss for the Hornets during the team’s campaign to repeat as state champs. He also scored touchdowns on a blocked punt and a fumble return.

After the football season ended, Gaither found even more success on the mat. Grappling with competitors who outweighed him by almost 70 pounds, Gaither pinned several foes en route to winning the 2A State Wrestling Championship. This spring, Gaither has put his talents to use on the track and field team. Along with running the 200-meter dash and 4 x 100 meter relay, he threw discus and competed in shot put.

He won’t be wrestling or running track for UNC Pembroke, but Gaither does plan on making an impact on the gridiron. Gaither chose the Braves over a few other North Carolina schools who showed interest, including Catawba and Winston-Salem State.

“I was looking for a place that felt like home,” Gaither said. “I felt like the coaches (at UNC Pembroke) made it feel like home. The players, I liked their energy. Plus I want to major in business and they have a good business program.”

When Gaither reports for training camp in August, he’ll arrive with his partnership with King in hand. The deal might not be as lucrative as some of the others being cut by college football’s most famous players, but it’s still a chance for Gaither to take advantage of his status as an elite athlete.

“It feels good to have one already before I even have one up (at UNC Pembroke),” Gaither said. “Maybe I’ll attract more.”

For King, the deal is a way to get his name out there as Gaither will be promoting his brand on social media and spreading the word to his friends and fellow athletes.

It’s also a way for King, who ran track at Livingstone, to help local athletes.

“I was looking at it as a chance to give back,” King said.