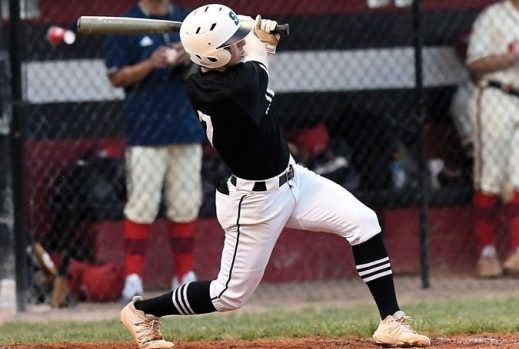 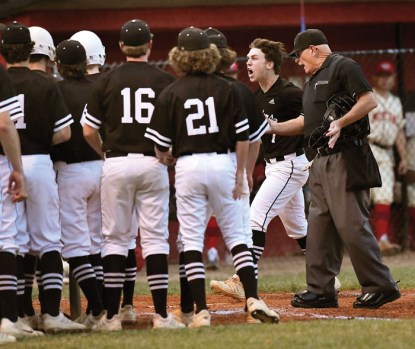 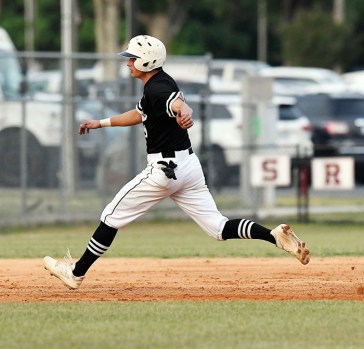 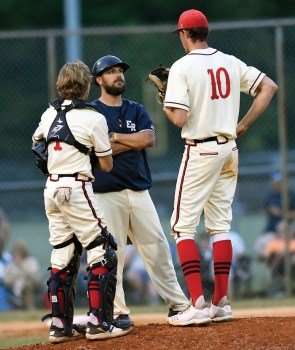 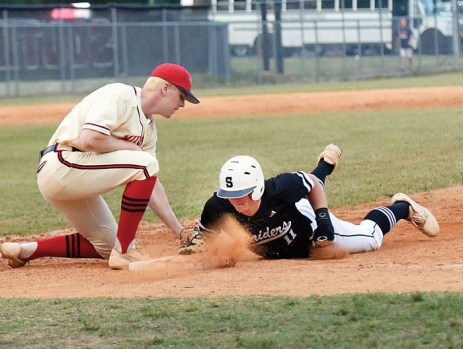 South's JD James dives back to first base with East's Morgan Padgett 14, covering. photo by Wayne Hinshaw, for the Salisbury Post

LANDIS — One lethal swing by South Rowan senior Nathan Chrismon, with his father and head coach Thad Chrismon in the third-base coaching box, gave the Raiders a monumental victory on Thursday in the South Piedmont Conference Tournament championship game played on South’s field.

Caught looking on strikes by East Rowan’s towering N.C. State commit Chance Mako on his first two at-bats, Chrismon nearly was a strikeout victim a third time in the top of the fourth inning with the scored tied 2-all and two teammates on the bases.

Mako got Chrismon in an 0-and-2 hole. A potential strike-three curveball just missed, as did a fastball that flirted with the outside edge. But Chrismon kept fighting until he got a pitch he could drive. When he did, the East Carolina-bound shortstop nailed it over the left-field fence for the decisive blow in South’s 5-2 victory.

Carson Crainshaw was excellent on the mound for the second-seeded Raiders. Both runs for East (23-4) came on an error in the bottom of the first. Hits by Cobb Hightower and Cameron Padgett put East in position to score.

Crainshaw (7-0) pitched 6 1/3 innings and was at his strongest in the fifth and sixth after Chrismon’s homer provided a wave of momentum for the Raiders (22-4). Crainshaw struck out five and while he hit a batter, he didn’t issue a single walk.

East coach Brett Hatley turned to Logan Dyer for the sixth inning. Dyer pitched out of jams in the sixth and seventh to keep East in the game.

South executed on a 3-6 double play to end the East sixth and the Raiders would end the game on another unconventional double play in the seventh.

The East seventh began in promising fashion for the Mustangs, as Austin Fulk opened with a double just out of the reach of sprinting South center fielder Kane Kepley. Tristan Miller walked to bring the tying run to the plate. Logan Dyer made solid contact, but his flyball was the first out.

Coach Chrismon turned to Chandler Oddie at that point. Oddie had been the winning pitcher in Monday’s first-round game with Lake Norman Charter.

The first batter Oddie faced was lead-off man Hightower. Hightower hit a hot smash to third baseman Colton Fisher, who gloved the ball, tagged the bag and threw across the diamond to JD James to complete the game-ending 5-6 twin killing. It was the fourth save for Oddie, who is 4-0 as South’s No. 3 pitcher.

South won the 2A Central Carolina Conference Tournament in 2021 as part of their late-season run, so the Raiders now have won back-to-back conference tournament championships.

Playoff seeds will be announced by the NCHSAA on Monday with first-round games on Tuesday and second-round games on Friday. The win propelled South Rowan to No. 1 in the 3A West RPI rankings, and the Raiders should be the No. 1 seed in the entire bracket. East is No. 2 in the RPI rankings, but won’t be seeded ahead of any conference champions.

See more details on the game in Sunday’s Post.