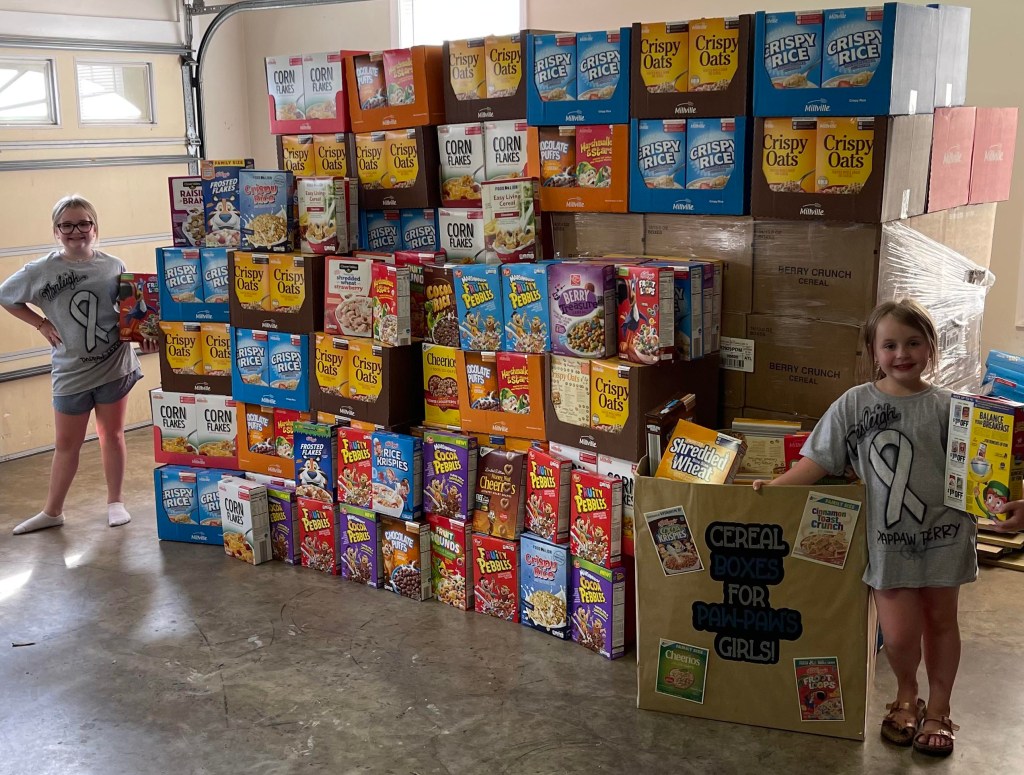 Photo submitted - Marleigh and Presleigh Holderfield posing with the pallets of cereal in their garage. The Shive Elementary students have blown past the entire school goal for the drive on their own.

SALISBURY — A residential home is not meant to house 1,500 boxes of cereal.

“We cannot park in the garage and the dining room is completely full,” Courtney Holderfield said.

The boxes have taken over the Holderfield home until they are delivered to Shive Elementary School next week as part of a school-wide drive to collect cereal and donate it to Rowan Helping Ministries.

The goal for the entire school was 600 boxes, but 1,500 boxes fill the house of sisters Marleigh and Presleigh Holderfield.

“My girls had a go-getter attitude,” Courtney said. “Both of them have always wanted to be overachievers.”

Marleigh, a third grade student council member at Shive, set out to collect at least 1,000 boxes. She said she feels like she should be a leader for her classmates.

Marleigh said collecting this much cereal makes her feel good since she reached her personal goal and hopes it will make the entire school happy.

“I’ve never seen a ton of boxes of cereal,” she said. “It makes me feel good, like we’ve done a good job.”

Shive Principal Zebbie Bondurant said she was inspired to hold the drive after she saw a video of a school held its own cereal drive, with the boxes set up as dominos wrapped around the school and then knocked down in a line.

“That’s what we’re hoping to do,” Bondurant said.

On Tuesday, the school received a pallet of the small individual bowls of cereal. She said the plan for those is to set them up so they will be knocked down by the last box of cereal.

Not counting the gargantuan donation at the Holderfield house, the school has collected more than 400 boxes already.

This is a first for Shive, so Bondurant is trying to figure out the optimal placement for the boxes. She said a lot will depend on the number of boxes the school collects by the deadline next week.

“This is the kind of thing Shive’s known for,” Bondurant said. “We’re giving back to the community, but it’s going to be a fun thing too.”

Courtney, Marleigh and Presleigh’s mother, said this donation has some special significance for the girls as well. The girls’ grandfather died unexpectedly due to complications from cancer in April.

The family asked for donations of unopened boxes of cereal in addition to flowers to be donated for his funeral.

“My father lived in Winston-Salem and was a very respected guy, worked for the city, knew a ton of people, so we got an outpouring of love and donations then,” Courtney said. “Before we knew it we had 1,200. Now we’re up to 1,500.”

She said their grandparents are the light of her daughters’ lives and her father would video call the girls to get updates on how many boxes they collected from the hospital.

“He said, ‘When Pawpaw gets out of here we’re going to make it happen, you’re going to be the top dog,’ ” she said.

Marleigh said collecting boxes for the drive in honor of her grandfather makes the experience more special.

Moving company College Hunks volunteered to move the boxes to the school next Wednesday before the Friday the 13th deadline.

Presleigh said it would be strange if the house is taken over by donations for another drive like this, but she would be OK with it.