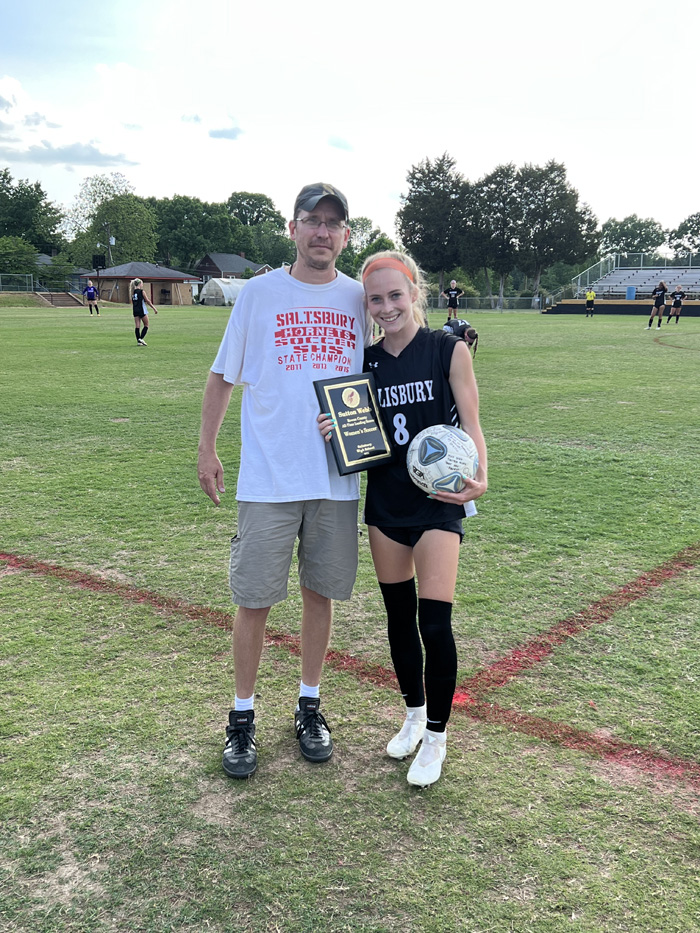 Webb needed one goal to break the record of 128 set by South Rowan’s Madison Henry, and she scored all four for the Hornets at Ludwig Stadium in a 4-0 non-conference win against Gray Stone.

Webb scored 43 goals as a freshman. She only got three in the 2020 season that was stopped after a handful of games by COVID.

Webb scored the record-breaker in the first half . The achievement was marked by the presentation of a signed game ball and a plaque commemorating the achievement.
Webb extended her record with three goals in the second half.
Salisbury got assists from Sage Huffman, Abby Campion, Kendall Colwell  and Izzy Banish.
Hannah Schmeltzer recorded four saves  for the shutout.
Salisbury got excellent play from Antasia Wilson and Madelyn Lawrence.
Next up for the Hornets is the final CCC match of the season on Monday at North Rowan. Game time is 6 p.m.
Salisbury (15-1-2) is fifth in the current RPI rankings for 2A West.
The Hornets have a tie and a loss against Central Carolina Conference leader West Davidson (18-0-1). The Green Dragons are sixth in RPI.  The top four are Wilkes Central, Wheatmore,  Community School of Davidson and Pine Lake Prep.

NOTES: The county’s leading scorer for boys soccer is still Sappia Venn, who was a senior at Salisbury in 1994. He totaled 151 goals. … Carson senior Hannah Isley,  Pfeiffer basketball recruit, scored six goals in the 10-1 win against A.L. Brown earlier this week and six more in a 9-0 win against East Rowan to break the Cougars’ school record with 73. Riley Isley scored a goal, while Allie Martin had a goal and two assists.