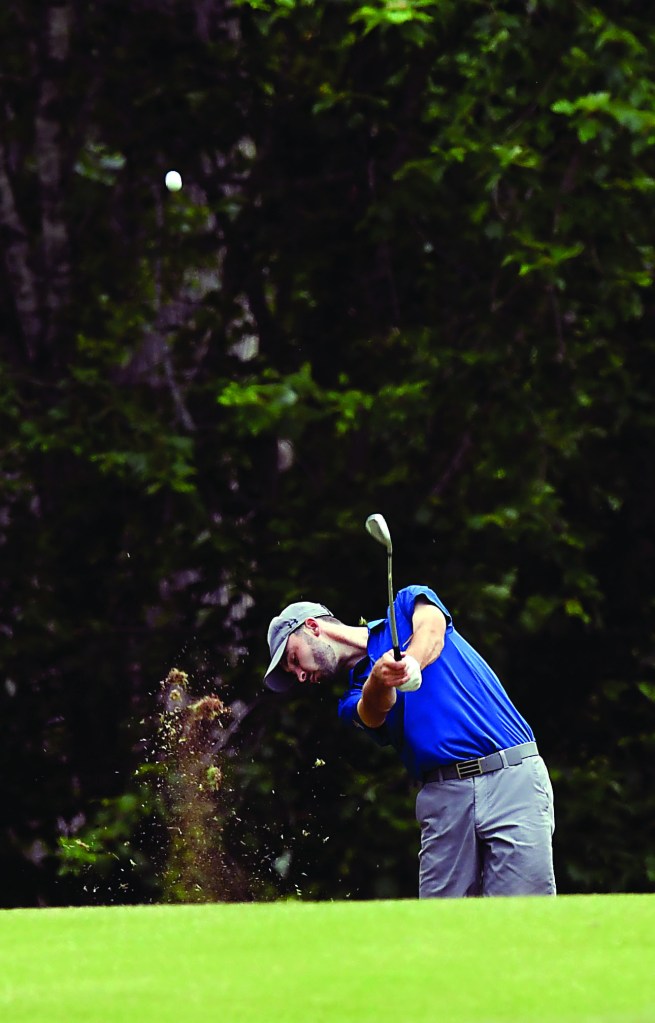 GREENSBORO, N.C. – UNC Greensboro (UNCG) graduate student Nick Lyerly (East Rowan) was selected as an individual to compete at the NCAA Regional in Palm Beach, Florida by the NCAA Men’s Golf Committee, as announced Wednesday afternoon on the Golf Channel.

Lyerly was one of five individuals to earn a spot in the NCAA Palm Beach Gardens Regional. The competition will be from May 16 to May 18 at the PGA National Resort. Florida Atlantic and the Palm Beach Sports Commission are the hosts of this regional.

Lyerly’s name appeared on the screen at 4:56 p.m. Eastern Daylight Time. He triumphantly raised his arms in the air once he saw his name. His teammates and athletic administrators enthusiastically clapped their hands. Lyerly passed the time sitting in a blue leather chair and eating popcorn, laughing, and drinking water.

“It’s very exciting to see your name pop up,” Lyerly said. “It shows I had a good season. Florida was one of my top two choices of where I wanted to go so that’s exciting. I get to play on a great golf course, one that the PGA Tour plays every year so it’s exciting. It was great to have everyone here supporting me because it shows how much my teammates care and how much our entire athletic department cares. It’s always nice to have that support system behind you.”

This will be Lyerly’s third appearance in the NCAA regionals. He had two under-par rounds finishing at even-par in 2018. A year later, Lyerly was 21st overall after finishing two-over-par.

The top five teams and the low individual not on those teams from each regional will advance to the finals. Regional play is considered preliminary rounds of the NCAA championships competition.

“It’s a great achievement for Nick to be selected to the NCAA Tournament for the third time in his career,” UNCG head coach Terrance Stewart said. “He’s one of the all-time great players in the history of the Southern Conference. It will be a lot of fun to watch his run in the postseason.”

Lyerly enjoyed a year to cherish. Earlier this week, he became the first UNCG men’s golfer in program history to earn this distinguished honor of being named the Southern Conference Player of the Year.

Lyerly won the Wolfpack Collegiate with a 10-under par effort on Oct. 17. He won the Grandover Invitational with an astonishing 14-under par performance on Oct. 24. During that weekend tournament, Lyerly bogeyed two of the 54 holes. He also won the Dorado Beach Collegiate tournament with another 14-under par showing on March 1.

Lyerly had six top-five finishes this season. His scoring average of 69.63 led the Southern Conference. Of his 30 rounds this season, 22 have been under par, with 13 rounds in the 60s.

Lyerly finished second at the Southern Conference championships after finishing the three-day event 10-under par. He ended the tournament with a performance to remember, a final-round of seven-under 65. Lyerly had eight birdies in the final round alone and was a five-under 31 on the front nine. He birdied five of the first nine holes. His tournament total of 15 birdies was third overall.

Advancing teams and individuals from regionals will qualify for participation in the championships, to be conducted May 27-June 1 at the Grayhawk Golf Club in Scottsdale, Arizona. Arizona State University and the Thunderbirds will serve as hosts.