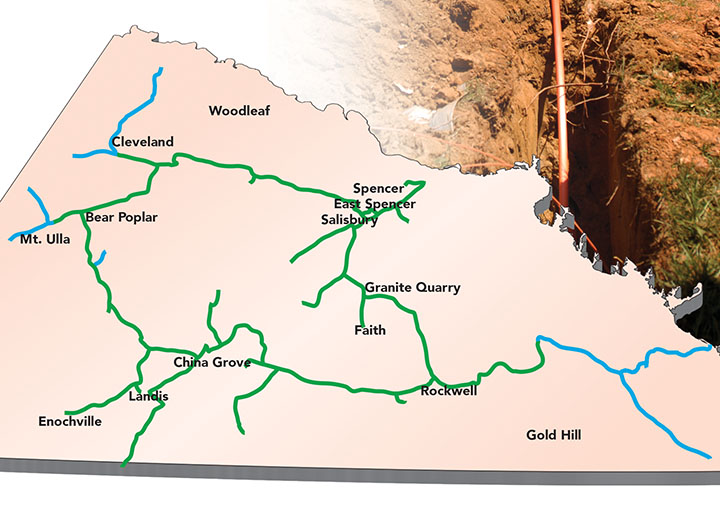 Andy Mooney / Salisbury Post This map indicates where Conterra Networks would expand its fiber optic infrastructure if the company receives a GREAT grant from the state to bring broadband to rural Rowan County. The green lines indicate the company’s current fiber and the blue lines show where new fiber would go.

SALISBURY — The Board of Commissioners on Monday committed to potentially providing funding to three additional internet services providers who are aiming to bring broadband to rural parts of Rowan County.

Four total internet service providers — Zirrus, Spectrum, Conterra Networks and Open Broadband — are competing for money from the state’s Growing Rural Economies with Access to Technology (GREAT) grant. The recurring grant program is designed to spur broadband expansion in unserved areas of the state. In the current funding cycle, the state will award up to $350 million in federal American Rescue Plan Act funding. The deadline for companies to apply is Wednesday.

The companies would each expand in roughly the same areas in southeast and northwest Rowan County identified by the state as being unserved, meaning there is no access to high-speed broadband.

The companies applying for the GREAT grant funding requested Rowan County provide a local match if they are awarded GREAT grants. Rowan County will only provide funding if a company receives a GREAT grant. Randy Cress, chief information officer for Rowan County, said he expects only one company to be awarded funding to expand broadband in the county.

Commissioners in March pledged to provide Zirrus, formerly Yadtel, with up to $1.98 million in American Rescue Plan Act funding to incentivize its expansion. The other three companies — Spectrum, Conterra and Open Broadband — requested less and varying amounts of funding from the county during the meeting Monday. Representatives from each company also laid out different plans for how they would bring broadband to Rowan Countians.

Spectrum, formally Charter Communications, was approved for up to $100,000 in matching funds from the county. Brian Gregory, vice president of state government affairs, said the GREAT grant would help the company expand its fiber optic network and bring 769 new homes and businesses in western and southeastern Rowan County online.

Utilizing a separate, federal grant program called Rural Digital Opportunity Fund (RDOF), Spectrum recently expanded its broadband network to 270 homes and businesses near Cleveland. The company will continue to use RDOF funding to bolster its broadband in the county.

Conterra, which already has 108 miles of underground fiber in Rowan County, built in partnership and to provide service to Rowan-Salisbury Schools, was approved for up to $250,000 in matching funds from the county. Conterra would expand its fiber optic network to reach 557 customers if awarded the GREAT grant.

Open Broadband was approved for up to $538,000 in matching funds from the county. Network improvements made possible by the GREAT grant would help Open Broadband bolster its broadband to include five towers, nine hubs to service 1,759 homes. The company has already been working to expand its services in parts of rural Rowan County through its fixed-wireless system. Unlike fiber, which is installed underground, fixed-wireless transmits radio signals via antennas from towers directly to a receiver on a customer’s home, as opposed to fiber cables.

Nick Steward with Open Broadband said the company has signed up about 50 customers around its tower connection around Youngs Mountain in western Rowan County.

For the companies who miss out on GREAT grant funding, all is not lost. Cress said the state is working on the Completing Access to Broadband (CAB) Grant program, which will include another $400 million in American Rescue Plan Act funding to expand rural broadband. Cress said the state will work with counties like Rowan to develop a competitive process for broadband providers to bid on broadband infrastructure deployments.

Commissioners were slated to consider approving a contract for Rowan-Salisbury Schools to purchase the Richard’s Bar-B-Q restaurant at 522 N. Main St. for $440,000, but the agenda item was removed at the start of the meeting. RSS plans to use the building to bolster its culinary education programs. The Board of Education approved the purchase of Richard’s at a meeting in April, but major capital purchases need approval from the Board of Commissioners as well.

Chair Greg Edds said commissioners needed more time to read through and examine the contract. Rowan-Salisbury Schools Chief Operating Officer Anthony Vann told the Post the removal of the item from the agenda didn’t indicate anything was wrong with the deal. He said commissioners will now have more time to review the contract before it is brought back at the next meeting.

• Commissioners met in closed session before approving a motion to engage national law firm Nexsen Pruet for planning and development purposes. No additional information was provided during the meeting. The county has used the law firm’s services previously in land use matters.

Eddinger focuses on experience in bid to retain seat…