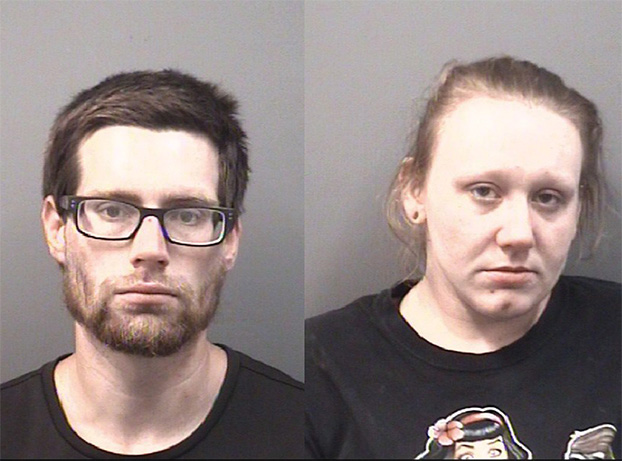 SALISBURY — A couple was charged Friday for multiple counts of child abuse against a 1-year-old and 8-year-old over a six-month period.

Patricia Leigh Hall, 25, received a bond of $50,000 after being booked into the Rowan County Detention Center. She was charged with five counts of misdemeanor child abuse and two counts of misdemeanor failure to report a crime against a juvenile. A report states Hall allowed her boyfriend to commit the multiple instances of child abuse against her 1-year-old and 8-year-old children.

The boyfriend in the report is identified as William Joseph Lee Elliott Jr., 27, of Salisbury. Elliott was charged with felony negligent child abuse with serious bodily injury, two misdemeanor child abuse counts and two misdemeanor counts of child abuse for children under the age of 12. He was booked on a $500,000 bond.

Yet another incident states Elliott stuffed cut-off shirts and rags into her 1-year-old’s mouth as a means of punishment. Hall also allegedly allowed her boyfriend to slap her 8-year-old.

Hall was charged for failing to report those instances of child abuse.

In other weekend reports:

• Ronnie Leo Truman III, 32, of Salisbury was charged Friday with felony failure to notify change of address as a registered sex offender within the required three-day timeframe. North Carolina’s sex offender registry states Truman was convicted in December 2012 for sexual battery of a victim aged 18 or older. Truman was booked into the Rowan County Detention Center with a $5,000 bond.

• Michael Todd Foster Jr., 27, of Kannapolis was charged Friday for five felony counts of trafficking opium or heroin and three felony counts of possession with intent to sell/manufacture/deliver a schedule one controlled substance. Foster was booked into the Rowan County Detention Center on a $500,000 bond. A report states Foster trafficked between at least more than 50 grams of heroin, a schedule one controlled substance, in total across several different days in December.