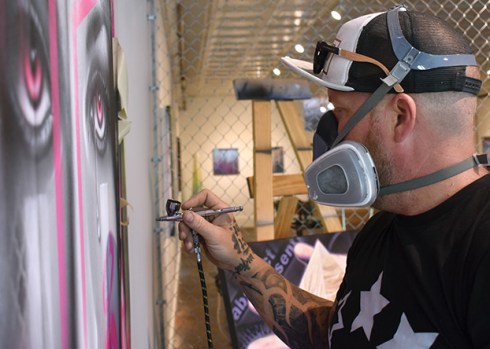 Shane Pierce works on a piece in his new studio and gallery space in downtown Salisbury. Known as Abstract Dissent, Pierce has made a name for himself with his aersoal artwork. Ben Stansell/Salisbury Post 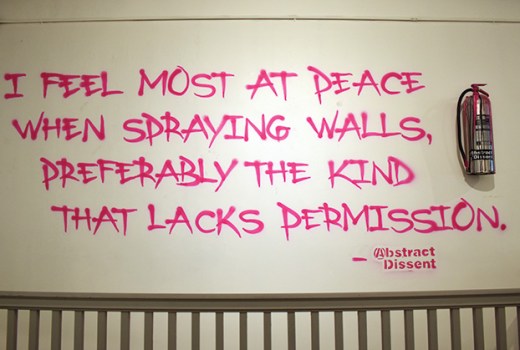 The first piece visitors see when they walk up and into Abstract Dissent's new gallery. Ben Stansell/Salisbury Post 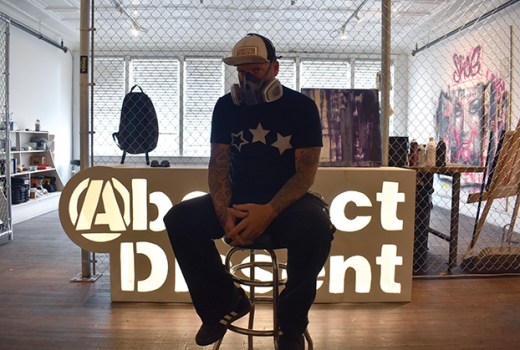 Shane Pierce, known as Abstract Dissent, forged a career in art by painting outside, but now he's bringing some of his work indoors and plans to create smaller-scale pieces that can go anywhere. Ben Stansell/Salisbury Post

SALISBURY — An artist who made a name for himself by turning the outdoors into his canvas is bringing his artwork inside.

Known commonly as Abstract Dissent, Shane Pierce has earned a reputation in the community for his ability to create eye-catching pieces with a few cans of spray paint. His colorful creations can be seen in the halls of North Rowan Elementary, on the sides of businesses such as Yummy Banh Mi and perhaps most noticeably on the large walls located on East Innes Street, near I-85, where his work welcomes people to Salisbury.

To showcase pieces he completed before his graffiti days and to replicate his more recent work on a smaller scale, Pierce is opening a second-floor gallery and studio above Touch of Grey tattoo parlor at 129 E. Innes St. in downtown Salisbury. Pierce will open the gallery with an art show on May 6-7 from 6-10 p.m.

Pierce has only been spray painting for about a half decade, but he’s already been commissioned to create pieces across the state and even in his home state of Ohio. Not bad for someone who didn’t have access to a formal art education and disregarded his propensity for painting for years.

From an early age, Pierce had a knack for creating striking art.

“In art class, I’m talking middle school, I didn’t do what I was supposed to do,” Pierce said. “I did what I wanted. But a lot of times it would end up in the showcase in the hallway and be out there all year because it was really good, I guess, for my age.”

But Pierce’s talents weren’t encouraged. Instead, he was told to focus on a more conventional career. When his parents couldn’t afford the high cost to send him to art school, Pierce said he became disenchanted with the art establishment. He stopped creating art altogether for several years.

Pierce, who runs an air duct cleaning business by day, eventually picked up a paintbrush and started filling canvases again. When he moved to the Charlotte area six years ago, he realized he needed more space. He found it outdoors.

“I figured there was unlimited space outside and started learning how to spray paint and that’s when it turned into something,” Pierce said.

He found the ideal outdoor space in Salisbury.

“I came to Salisbury and went to (graffiti park) because I heard it was a place to paint where you didn’t have to stress about getting in trouble,” Pierce said. “I was driving up from Pineville to Salisbury just to learn without any stress.”

He fell in love with the medium because he could finish a piece in a matter of minutes.

“I felt like it was what I should’ve been doing the whole time,” Pierce said.

Even though Pierce was a novice, people took notice of his talent and he started receiving offers to do commissioned pieces around Salisbury.

“I basically learned through commissions around town how to spray paint, and in the public eye because I was posting everything,” Pierce said.

Pierce’s prints are not hard to find around Rowan County. He recently repainted the “break room” at Grievous Gallery, where guests can take out their emotions on glass bottles and plates. He’s responsible for the large mural in The Pedal Factory and the owl at Lost & Found. In what will be his largest piece yet, Pierce is preparing to paint a mural on the wall of Grove Cartel in China Grove to match the new brewery and restaurant’s gangster theme.

He said he’s put art in other places too, not all of them with permission.

Pierce said it’s fitting to have his gallery here instead of Charlotte because Salisbury is where he launched his spray painting career.

“Salisbury has been really kind to me,” Pierce said.

This will be Pierce’s first gallery and indoor studio. He doesn’t want the space to feel like a traditional art gallery. Large highlighter pink words posted on the wall above the staircase entrance to the space make that clear. They read: “I feel most at peace when spraying walls, preferably the kind that lacks permission.”

“It’s kind of anti-establishment,” Pierce said. “I don’t want the regular, normal fine art. I want it to keep this street edge to it. We’re taking what’s outside and bringing it inside.”

He’s considering opening the gallery to other artists like himself who have circumvented the traditional route taken by many artists. He wants to help others who have also been inspired by artists such as Banksy and Shepard Fairey to “hack” the art establishment through street art.

If he does open the gallery to other artists, he will have at least one requirement in place.

“You’ve got to have street cred,” Pierce said. “I’ve already decided that.”

While most of the gallery is dedicated as a showcase space, Pierce has partitioned off a portion using metal fencing for a studio space. He plans to combine to create smaller, more portable pieces that he can sell to people around the country. But Pierce is clear that making money from the gallery isn’t what’s important.

“It’s about creating the scene, creating the space and building the community,” Pierce said. “It would be cool if I could sell some art, but I bet 90% of the people who come here aren’t from Salisbury, but are people who follow me who live over the state. If anything, there will be a lot of new people here and this will be their first experience in Salisbury.”

More information about the gallery and studio can be found on Abstract Dissent’s Facebook page. Pierce said the gallery will likely be open whenever Touch of Grey is open.