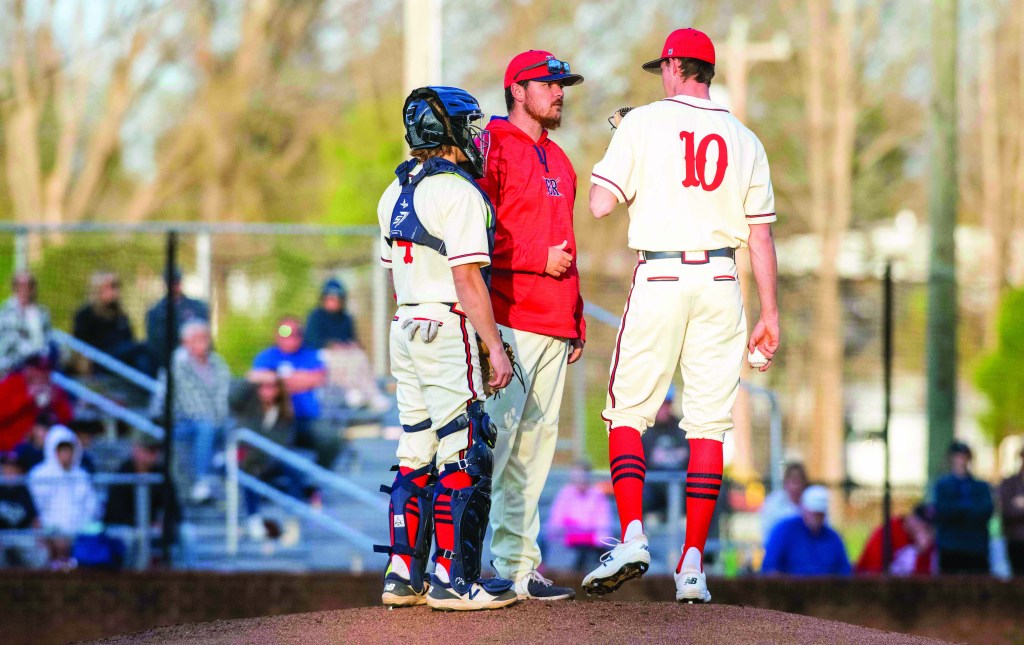 Pitcher Chance Mako and a conference on the mound. JON C LAKEY / FOR THE SALISBURY POST.

Both teams completed the regular season on Friday with 13-1 South Piedmont Conference records.

No one could remember someone going 13-1 and only tying for first, but everyone agrees this was not an ordinary season.

“Well, we did get a piece of it,” said East head coach Brett Hatley, who had hoped for better news from the South-West Rowan game, but hadn’t really expected it. “Co-champs. We’ll run with that.”

The South-East debate finally will be settled, at least temporarily, next week at the South field.

There are several SPC teams that are good enough to knock either one of them off on the right night, but chances are good that the Mustangs (who won at South) and the Raiders (who won at Staton Field), will go at it for a third time onThursday at 7 p.m. in the tournament championship game.

Conference tournaments always mean trophies and bragging rights and solid gate receipts, but this one could mean much more. Beyond the local championship, the SPC tournament is likely to decide the No. 1 seed for the entire 3A West bracket. East and South currently are 1-2 in the 3A West RPI rankings.

The No. 2 seed from the SPC can’t be seeded ahead of any of the conference champions in the bracket. So you’re looking at being the No. 1 seed or maybe being the No. 9 seed. Something like that. That’s a serious swing.

East handled Northwest Cabarrus 7-2 at Staton Field on Friday to finish its stellar regular season with a 21-3 record and takes a five-game winning streak into the postseason.

Undefeated Chance Mako, the towering right-hander who was an early commit for N.C. State, was one out away from a complete game when he reached the pitch-count limit. He walked three and uncorked three wild pitches, but he struck out eight in a poised performance against a quality team.

East trailed 1-0 in a hurry after Trent Grigley bounced a single through the left side and Landon Finley doubled, just fair, down the right-field line.

East got that run back in the bottom of the first  when Griffin Warden’s double chased home Cobb Hightower.

Austin Fulk had a lead-off hit for the Mustangs in the second, as they took the lead for good. No. 9 batter Logan Dyer and Hightower delivered the two-out hits that made it 2-1 and then 3-1. Hightower crushed a double to left-center.

“I thought we were really locked in, played hard and played well, played the way you want to play on Senior Night,” Hatley said. “Mako was a standout, Dyer was really clutch and all our guys were solid. We did the little things well. We were aggressive on the bases, while also being smart on the bases.”

East stole five bases. Most of those thefts figured in the scoring column.

East never strung together a big inning, but it was a relentless offensive attack (10 hits, four walks, lots of deep counts) that put pressure on the Trojans every inning. Northwest sophomore Dalton Hazlett wasn’t bad at all, but he needed 90 pitches to get through four innings. Finley pitched the last two.

East didn’t need to bat in the seventh, but the Mustangs scored in the other six innings.

Morgan Padgett’s well-struck sac fly made it 4-1 in the third. Dyer’s second RBI single made it 5-1 in the fourth and he walked with the bases full for more insurance  in the fifth.

Fulk’s line drive single to left with two outs in the sixth made it 7-1.

Things might have gotten a lot tighter in the top of the fifth, when tht inning began in promising fashion for the visitors with a single and a walk. Mako had to make a good play to get an out on a sacrifice bunt, and with runners at second and third and one out, Northwest had its chance.

But Mako came back from a 3-and-0 count to get a strikeout. Then catcher Tristan Miller picked a straying runner off second base to end the threat.

“The runner was getting way too much off the bag,” Hatley said. “It was there, and Tristan and Cobb (who made the tag) executed.”

East turned a double play to help Mako in the sixth. Hightower, the shortstop, was shaded near the bag, and a groundball found him for an easy twin killing.

“That was a layup for Cobb,” Hatley said.

Two East miscues led to a Northwest run in the seventh, but the Mustangs were able to nail down the last out on a base-running mistake.

NOTES: Maybe he was inspired by the latest win. East assistant coach Michael Pinkston proposed marriage on the field after the game. “Now that was an awesome moment,” Hatley said.  … At Saturday’s conference meeting, East drew the No. 1 seed for the tournament, while South Rowan is No. 2. Keep in mind those seeds are just to seed the tournament. The tournament will determine who gets the No. 1 seed for the playoffs. … In that three-way tie for third, West Rowan got the No. 3 seed, with Carson No. 4, and Northwest (14-7, 8-6) No. 5. … South will be the host team for Tuesday’s semifinals and Thursday’s championship. If South is in the semis, the Raiders will play the later game.