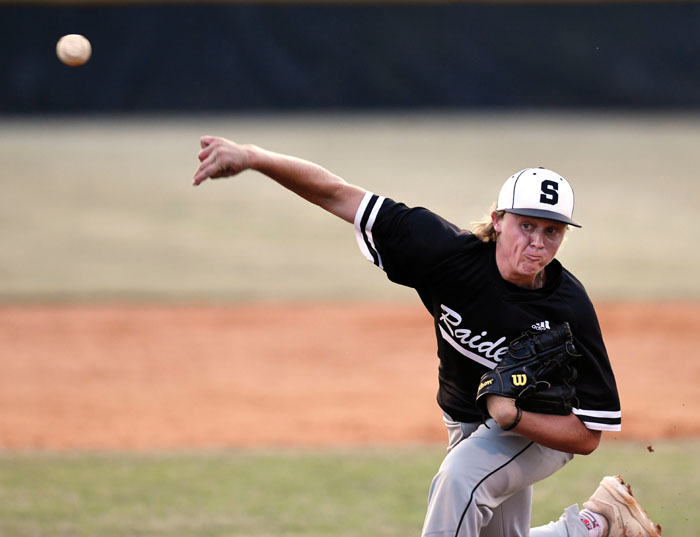 Like the kid in the back seat complaining, “Are we there yet?” the senior-laden Raiders are a team in a hurry. They can’t wait for postseason play to launch after Friday’s 6-3 win over visiting West Rowan gave them a share of the SPC regular-season championship.

“We’re ready. We’re pitching it well and giving ourselves a chance,” said winning coach Thad Chrismon, now the proud owner of 201 career victories on Patterson Street. “We’ve got the ability to play at a high level. And I think they’re ready to get after it this post-season.”

South (19-4, 13-1 SPC) will kick off the conference tournament as the No. 2 seed on Monday night at home. It enters with five straight wins and triumphs in 10 of its last 11 games. And while their most recent decision was a bit on the sloppy side, the Raiders remain a team with confidence oozing through its veins.

“The chemistry is there,” South catcher Jacob Ritchie said, moments after battery mates Carson Crainshaw and Chandler Oddie combined to muzzle West (14-9, 8-6) on six hits. “It’s a special team and we’re ready for whatever comes next.”

The Raiders got there by scoring four unearned runs against West starting pitcher Jake Blevins. South used singles by Kane Kepley and Ty Hubbard — sandwiched around a double steal, an infield error and a sacrifice fly by JD James — to score three times in the last of the first inning, putting the Falcons in an early hole.

“Yeah, we’ve got some inexperience at some positions and that showed up tonight,” West coach Seth Graham said after the Falcons were charged with three errors. “It’s just young guys playing their best.”

South’s defense was nothing to brag about. The Raiders committed five errors — including three in the top of the fourth — but persevered and extended a season that reads like a bestseller. All of West’s runs were unearned.

“There were some instances where it was a distraction,” unbeaten Crainshaw said after notching his sixth win. “But I’ve always had faith in the guys behind me. With nine seniors, it’s a great feeling to be out there pitching.”

Crainshaw, a senior right-hander with a nasty cutter in his arsenal, was sharp from the start. He retired the Falcons in order to open the game, then navigated his way through five innings — allowing four hits, striking out six and inducing six groundouts. He retired West’s leadoff batter in all five innings.

“I thought he did a good job against their left-handers,” Chrismon noted. “We always try to get better every outing — and the last outing (against Northwest Cabarrus) he struggled against left-handers. Tonight he made better pitches and got us ground balls.”

He also got some support. South bolstered its lead to 5-1 in the third inning when Ritchie clubbed a no-doubt-about-it, two-run homer that cleared the left-field fence with room to spare. He confessed to crunching a 2-1 slider that failed to slide.

“It was right down the middle,” he smiled afterward. “With a runner on third base, I just needed to put the ball in play somewhere.”

The Falcons closed within 5-3 in the mistake-filled fourth inning, with Matthew Connolly scoring on a Noah Loeblein base hit and Peyton Summerall crossing on a misplayed bunt. South courtesy runner Coleman Overcash scored the game’s final run after Crainshaw delivered his second hit in the bottom of the fourth. Four batters later, Overcash scored on a one-out error.

Oddie pitched the sixth and seventh innings for South, yielding a pair of singles. He received defensive help from Kepley, the center fielder who ran down three fly balls late in the game. Graham was certainly impressed. “I love the way that kid plays,” said West’s eighth-year coach. “He’s probably the best center fielder within 200 miles.”

High praise indeed — and a sentiment echoed by Chrismon. “We feel if the ball is hit in the air, he’s going to catch it,” he said. “He one of the toughest players we’ve got. And he gets after it every single day like that.”

Chrismon, now in his 14th season at South, can’t help but feel that something special is brewing. “It’s a lot of fun coaching this team,” he said. “They’re good kids, but they’re pretty good baseball players too.”

NOTES: Blevins fell to 4-5. He surrendered two earned runs and nine hits in 5 1/3 innings. Drew Burton relieved, faced one batter and induced an inning-ending double play. … South shortstop Nathan Chrismon, the coach’s East Carolina-bound son, reached base three times. So did teammate Finch McMillin, who collected two infield hits. …  First-round games will be played at the higher seeds on Monday, before the tourney shifts to South for Tuesday’s semifinals and Thursday’s championship game.