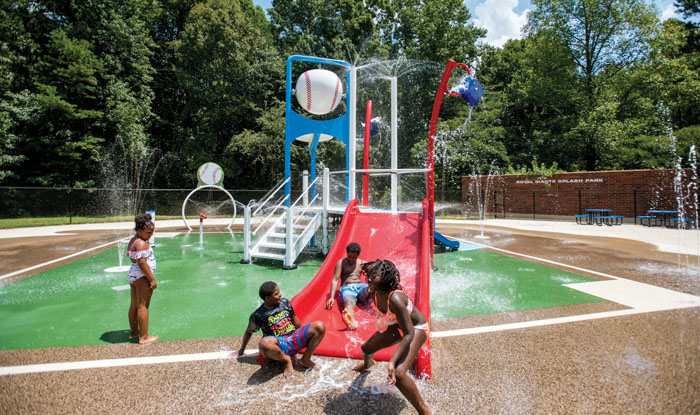 JON C. LAKEY/SALISBURY POST File Photo —  The splash pad at East Spencer's Royal Giants Park has been closed since 2019 but will reopen as part of a celebration event in May.

EAST SPENCER —  After years of working to make improvements, and then a closure due to the pandemic, East Spencer will reopen a newly improved Royal Giants Park next month.

Mayor Barbara Mallett told the Post improvements have been in the works since at least 2016, when the town received a $300,000 N.C. Parks and Recreation Trust Fund grant that required a 50% local match to make the needed improvements. The town was able to raise the other half from donations.

The park, located at 200 Robinson Road, was open in 2018 and partially opened in 2019 with a new splash pad unveiled during the grand opening that year. The park has remained closed since the end of the 2019 season because of the pandemic. But on May 14, the town will host a grand opening event welcoming East Spencer and Rowan County residents to enjoy music, food, face painting and fun for all ages. The event will begin at noon and span until 6 p.m.

Around 2 p.m., Mallett said the town will recognize and honor the late alderman Otis Gibson, who died in 2018. Mallett said Gibson was “instrumental” in park efforts.

Town Administrator Michael Douglas said the most recent set of improvements include a renovation of the splash pad and restrooms, repairs to the basketball court, a new swing set and pressure washing of the shelters and other amenities. Additionally, a walking trail has been constructed and will be maintained by the town. Douglas said there aren’t any major plans for the park, but the intent is to open it so that residents can use and enjoy it.

Though the grant funding and donations covered the bulk of repairs and improvements, Douglas said just under $10,000 was needed from the town’s Parks and Recreation budget to cover some overages. No other improvements are planned for the park once this set is completed.

Mallett said amenities are available for children of varying ages to enjoy, and facilities are ADA-compliant as well. The hope is to keep the park open until September as weather permits, with a reopening for the following spring. The park also has fields that can be used for sports like baseball and soccer as well as a corn hole toss. Additionally, the park will be open to rent for groups who may host summer camps, parties or other events.

Mallett said park preparations have moved along as planned and in line with what the town envisioned for the space. Over the last few years, Mallett said contractors have worked to fix and refurbish the pool’s bathrooms, showers and concession stand.

“We’ve been waiting a long time but this will be an asset not only for East Spencer community but (also) the whole northern Rowan community,” she said.

While entrance to the park on the grand opening date of May 14 will be free, there will be a $1 charge for admission for the rest of the season.