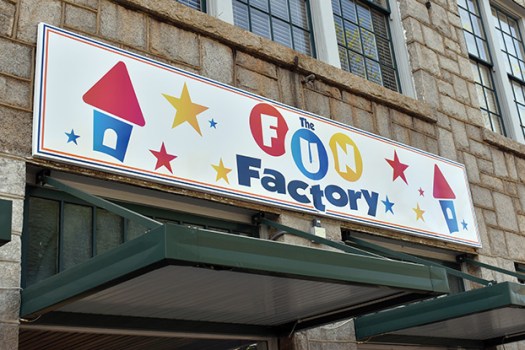 The sign for The Fun Factory is already up on the North Church Street building, but plenty of work is still to be done to transform the inside in a play place and cafe. Ben Stansell/Salisbury Post

This rendering shows how the soft play play equipment at The Fun Factory will look. Photo submitted.

SALISBURY — Tired of having to drive outside of Rowan County to take her two boys, Waylen and Wyatt, to a safe indoor play place, Marianna Riley Jarrett decided to create her own closer to home.

Jarrett, the owner of Spotlight Dance Company, is preparing to open The Fun Factory right next door to her studio at 120 N. Church St. The indoor play cafe will have it all — a three-story “soft play” playground, a ninja course with more than a dozen obstacles, a mini-trampoline park, a toddler section, two birthday party rooms and a small gift shop. A cafe at the front of The Fun Factory will have coffee, tea, sandwiches, salads and baked goods made in-house.

“We’re going to offer a lot of different things and I do think it is something Salisbury has needed,” Jarrett said.

Jarrett is targeting late August as an opening date for The Fun Factory.

The project has been in the works for several years. Jarrett was poised to sign a lease on another location before the pandemic brought everything to a halt.

“I was devastated,” Jarrett said. “I’m not going to lie. I put in a year of planning, a year of work. I was disappointed that it didn’t work out.”

The setback had its own silver lining. While Jarrett was forced to put her original plans on hold, the 8,000-square-foot space right next to her dance studio became available for lease.

“I was disappointed that it didn’t work out, but in the end I’m so happy,” Jarrett said. “It’s bigger than the original space and being right there at the studio I love. It was set up almost perfectly for what I want to do.”

The future home of The Fun Factory is the former home of Bounce City, a children’s amusement park that was different but not completely dissimilar to The Fun Factory concept.

The Fun Factory and Spotlight will be two different businesses, but they will be physically intertwined.

“They’ll be separate businesses, but I want it to be cohesive as well,” Jarrett said. “If people are dancing and they have siblings who can play, they can go in there and play. We’re also opening a cafe in the space. That’ll be great for our competition dancers who are at the studio from 4 to 9 at night.”

The soft play playground has been specially designed to fit the physical parameters of the building and will have slides and other typical playground equipment. The ninja course is reminiscent of what one might see when watching NBC’s “American Ninja Warrior,” but on a smaller and safer scale. The course will have 15 obstacles.

Jarrett said The Fun Factory will have something for kids of all ranges, from toddlers to 14 year olds. The plan is to have a specific section for toddlers and to reserve a “toddler time” during which only kids 3 and under can use the play equipment.

“It’s a place for families with multiple kids where the parents can come, maybe use our free wi-fi and get some work done, let their kids play, grab something to eat and have a place where they can safely play,” Jarrett said.

Jarrett envisions The Fun Factory becoming a birthday party destination. And with a bakery on site, Jarrett said The Fun Factory will offer customizable birthday cakes and other sweet treats. She expects to also host a variety of family-friendly events, such as yoga classes, story time and art classes.

“There’s not anything like it and especially in the cold months and on rainy days, it’ll be a really fun place for parents to bring their kids,” Jarrett said.

The entrance to The Fun Factory will be on North Church Street. A closed off foyer will allow The Fun Factory employees to monitor who enters and exits the facility, which is another feature of the building that Jarrett is excited about.

The renovation process is now underway. Construction crews will take out the carpet, repaint the walls and install the cafe. The playground equipment, Jarrett said, is currently being built and constructed and is scheduled to arrive in July. Crews will need about 35 days to put it together.

Up to date information about the renovation process and opening will be posted on thefunfactorydowntown.com.