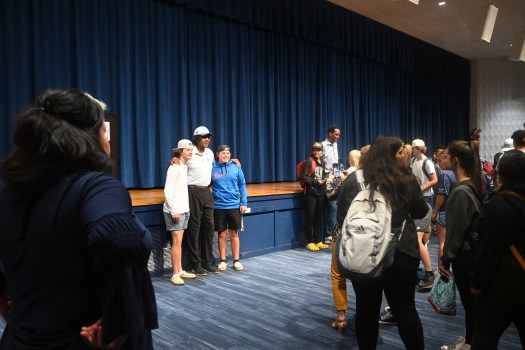 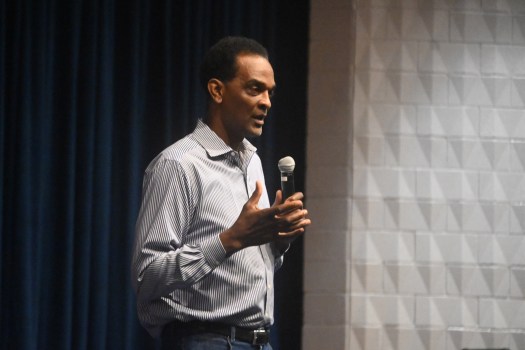 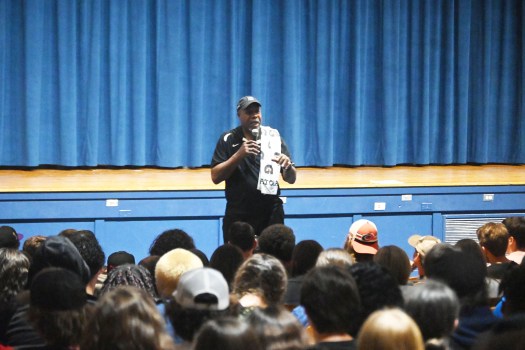 Madeline Wagoner/Salisbury Post — Gene Banks speaks to East Rowan ninth and 10th graders about the importance of love and respect. 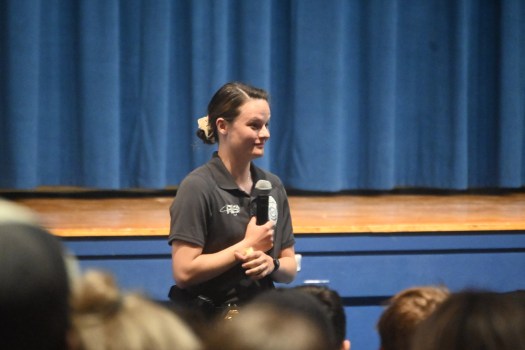 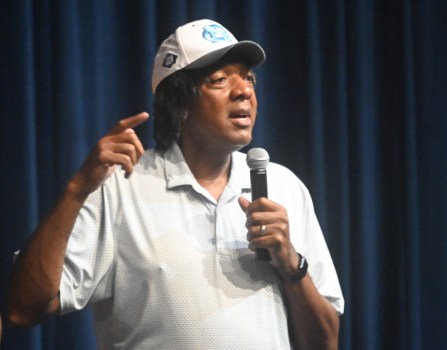 Madeline Wagoner/Salisbury Post — Al Wood speaks on alcoholism and the importance of asking for help if students have a problem.

SALISBURY — ABC Upward! kicked off its annual high school tour this week with some encouraging messages from notable guests out the world of sports.

Retired pro basketball players Al Wood, Gene Banks and Ralph Sampson were all part of this week’s lineup to share their testimonies and were all at East Rowan High School’s event on Tuesday.

The organization recently revamped the name of the program from Game Plan for Life to ABC Upward! to reflect their core message to students across Rowan and Cabarrus counties. The Rowan-Kannapolis ABC Board invests $50,000 – $60,000 of its profits every year to bring the program to schools across the county.

While the organization continues to emphasize careful decision making when it comes to drinking alcohol, the topics brought up at East Rowan touched on more struggles students may face while in their adolescence.

“What we do goes beyond alcohol education for children and college students,” ABC Upward! Director Nanette Dillon said. “Our purpose is to lift them up, which is why we changed the name to ABC Upward!”

Each speaker shared a personal story to the ninth and 10th graders. Duke University graduate Banks told about his upbringing from a low income family with almost nothing and how it was a time in his life that was difficult to find motivation.

“We had trials and tribulations that you all may be going through right now,” Banks told the students. “You all are at the age where you’re going to have to make decisions and do things. I was very fortunate, I used basketball as a vehicle to channel my energy, but the first thing you need to do is have trust and respect.”

He went on to underline the importance of love and respect for everyone before they can pursue their dreams.

“There are people who are there for you, drugs and alcohol will only hold you back,” he said.

Sampson played college basketball at the University of Virginia before entering the 1982 NBA draft. He shared the acronym M.A.P. with the students. That stands for motivation, attitude and plan. He focused on using those three keys, along with the importance of respecting the support of the community each individual has in their lives.

“We had the walk and the swagger but what made us great basketball players was the support we had,” he said. “Appreciate your parents, tell them you love them, thank them for everything they do for you.”

Wood stressed the importance to the assembly that sometimes lives can be negatively affected even if somebody is doing the right thing. The organization brought alcohol law enforcement agent Savannah Helms to speak on the incidents some students may face when it comes to the complicated world of liquor. She spoke on the process of source investigation which involves investigating the cause of deaths by collision.

“It usually involves alcohol,” she said. “Turn to your friend, turn to your buddy and say hey, then imagine them being gone tomorrow. It can happen to anyone at any time.”

Wood, a graduate of UNC-Chapel Hill, wrapped up the event with the story of his journey to sobriety. Despite missing out on a relationship with his mother who was also an alcoholic imprisoned for stabbing a man to death when drunk, Wood still fell into an addiction with alcohol.

His message continued with the importance of realizing alcoholism could happen to anybody, whether it is intended or not. He encouraged the teenagers in the audience to swallow their pride and ask for help when they realize they have an issue whether it be mental, physical or financial. Wood touched on the topic of suicide and how sometimes it can be especially difficult to seek help.

“It hurts me so much to see somebody gone from suicide. You hear people say ‘I didn’t know, I didn’t realize they were going through that.’ Let me tell you something, when you’re friendly to somebody, it makes all the difference in the world,” he continued, telling the assembly it can be something as small as showing kindness to everyone they meet. “What you sow, that you will also reap. If you’re kind, kindness will come back to you. If you’re rude, rudeness will come back to you.”

The session ended with the opportunities for students to meet the athletes for autographs and pictures. The organization will continue to visit other high schools this week before touring middle schools and colleges in the fall. 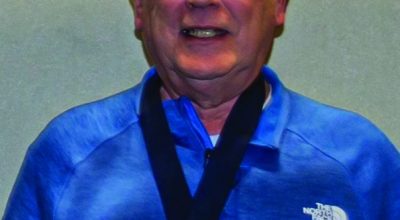