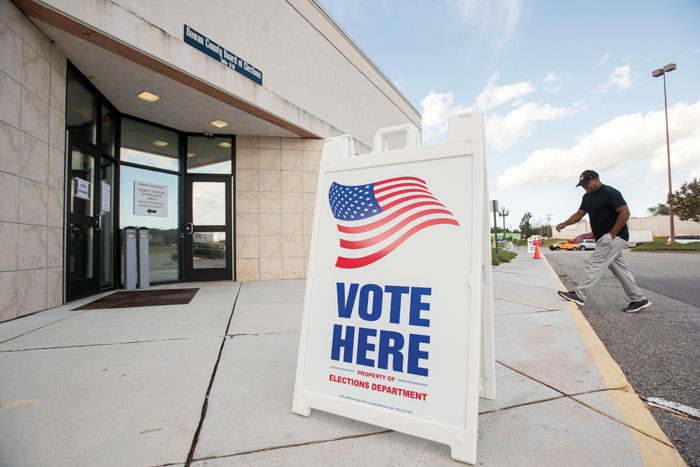 JON C. LAKEY/SALISBURY POST Darrell Foxx heads into the Board of Elections office for early voting in 2019.

SALISBURY — Early voting begins today in Rowan County, with three polling locations available and 15 full days that will span until May 14.

The primary election date is May 17.

Between April 28 (Thursday) and May 14 (Saturday), early voting hours in Rowan County include:

Early one-stop voting sites in Rowan County will include the Rowan County Board of Elections at 1935 Jake Alexander Boulevard West in Salisbury, the Rockwell American Legion building at 8580 U.S. Highway 52 in Rockwell and the south branch of the Rowan County Public Library at 920 Kimball Road in China Grove.

Absentee by mail voting is currently underway, and approximately 30 have been tabulated for the primary election to date. Those ballots can be obtained at the Board of Elections office in-person or by visiting www.rowancountync.gov/Elections. They can also be filled out by visiting votebymail.ncsbe.gov/app/home. Absentee by mail ballot requests must be made no later than 5 p.m. on May 10.

The deadline to return civilian absentee by mail ballot is 5 p.m. on May 17, the date of the primary election. The container-envelope with the enclosed ballot must be returned to the county board of elections office, not an Election Day polling location. Absentee ballots received after that deadline will only be counted if they’re postmarked on or before Election Day and received no later than 5 p.m. on the Friday after the primary election. Ballots without a postmark must be received no later than May 17 to be counted.

The following is a list of candidates who will be on the ballot for the primary election. Primary voters can cast a ballot with their registered party. If unaffiliated, those voters can choose the party ballot in which they cast their votes. There are only two primary races for Democrats in Rowan County, which include the Sheriff and the U.S. Senate elections.

A number of races have both Republicans and Democrats running who won’t be on the ballot until the general election. Some of those races include N.C. Senate District 33, the North Carolina Supreme Court, Rowan County Commissioners and the new Congressional District 8.