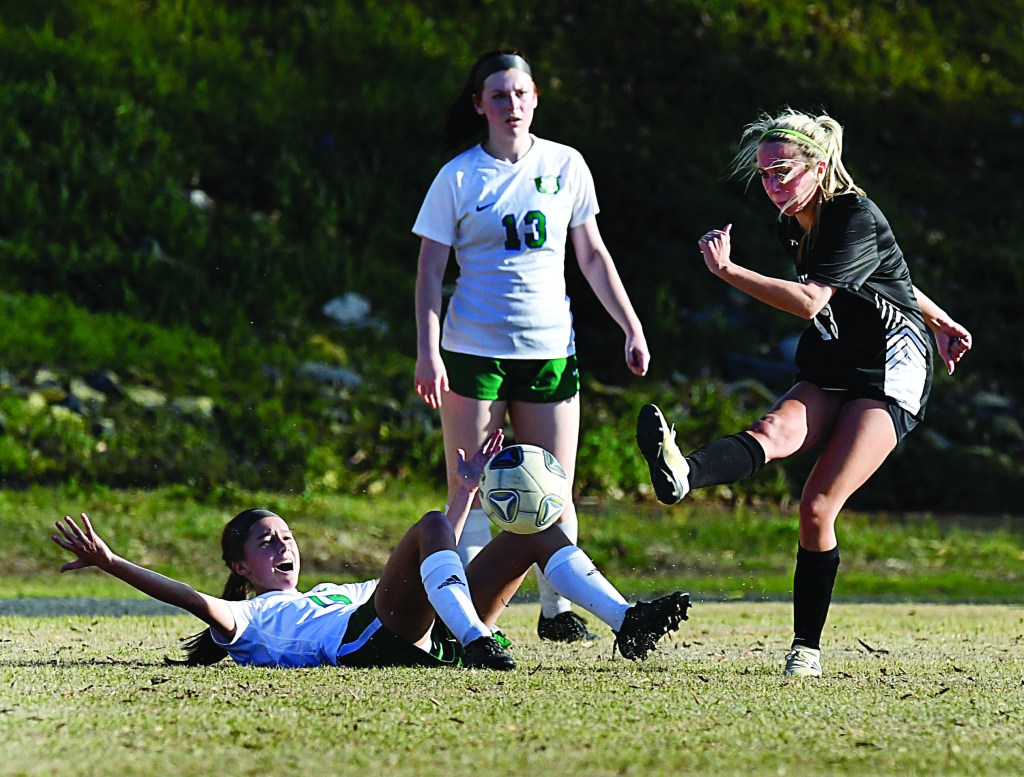 Salisbury’s girls soccer team improved to 13-1-2 overall and 8-1-1 in the Central Carolina Conference with a 3-1 win over East Davidson.

“Despite trailing initially (East Davidson’s goal came on a penalty kick) and a plethora of injuries, (SHS ended up missing three starters due to illness or injury by the end of the match) we never gave up or quit fighting,” Salisbury coach Matt Parrish said.  “I was exceptionally proud of all of the girls for taking the adjustments in stride and working together for a full 80 minutes.”

Kyna Zaldivar found a streaking Sutton Webb, who beat the keeper one-on-one to level the scoring at 1-1.

After several box-to-box, back and forth minutes, Webb recorded her second goal of the half (and perhaps the nicest of the season) after beating several East Davidson players and curling an angled shot across the box and into the upper 90 to provide the halftime score.

The second half had all of the intensity but less scoring.

Zaldivar took a throw-in  from Kendall Colwell, picked up her head, and buried a 20-yard shot top shelf for the lone goal of the second frame.

Next up for the Hornets is Senior Night Monday night against Lexington.

Atkins edged South Rowan 5-4 in the first round of the 3A dual team state playoffs on Wednesday.

South has four in this weekend’s 3A Midwest Regional individual tourney in Concord.

Catawba plays Mars Hill in the single-elimination portion of the South Atlantic Conference Tournament today at 4:30 p.m. in Kodak, Tenn.

• Catawba pitcher Greg Brown was named to the All-SAC first team and relief pitcher Robbie Cowie made the second team.

Vance Honeycutt (Salisbury) has 10 homers and 23 steals for UNC and is batting .248.

Carson lost to North Stanly 4-3 in 10 innings on Wednesday.

Keegan Barger had three hits. Aaron Coe andCameron Burleyson had two each for the Cougars (14-9) in the non-conference matchup.

West Rowan slugged four homers in a 15-5 non-conference win against Davie on Wednesday.

Davie scored two runs in the top of the first, but a three-run homer by Brooke  Kennerly and a solo homer by Riley Haggas gave the Falcons a 5-2 lead after an inning.

Madelyn VonCanon homered in the fourth for a 12-4 West lead.

Clarke added a triple and drove in five runs.

Kennerly also doubled and knocked in three. VonCanon had a double. Kenadi Sproul had two hits and scored twice. Madeline Kluttz had a double.

The NCHSAA announced that girls wrestling will become a sanctioned sport for the 2023-24.

Charlie Graeber tied for second with a 1-over 73.

The N.C. Senior Amateur, 54 holes of stroke play, will be held May 9-11 in Durham at Croasdaile Country Club.

Anderson had low net score. John Daniels with a 66.73 was the Super Senior winner.

Kendrell Goodes (North Rowan) has a best of 6 feet, 5.5 inches this season for North Carolina A&T.

UNC Wilmington junior Josh Parks (A.L. Brown) placed third in the  400 hurdles and fourth in the  110   hurdles in the Virginia T&F Challenge.