Sports: Lots of offense for Carson soccer in win over Falcons 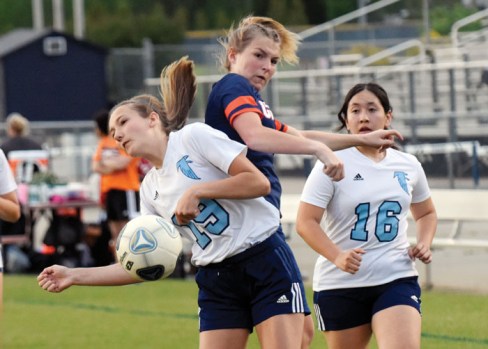 West's Temperance Jones (19) keeps the ball from Carson's Makayla Borst as Emilie Vera moves in at right. Photo by Wayne Hinshaw, for the Salisbury Post 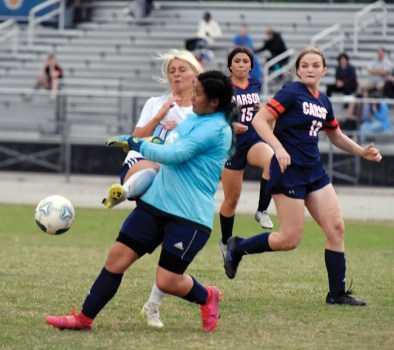 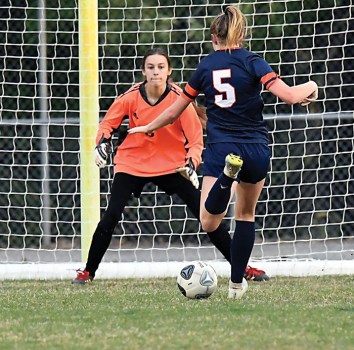 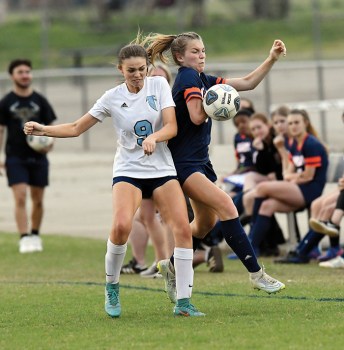 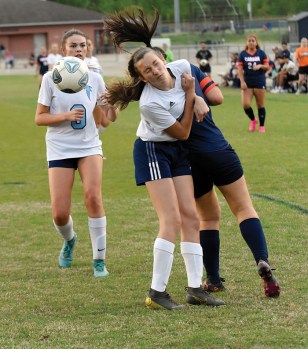 CHINA GROVE — Defense is the strength for West Rowan’s girls soccer team, and the Falcons won a tense 1-0 thriller against Carson the first time the teams played.

So the last thing Carson coach Lauren West was expecting in Tuesday’s South Piedmont Conference rematch was a flurry of offense.

But that’s what she got. The Cougars beat the Falcons 7-2.

“I’m happily shocked right now with seven goals,” West said with a laugh. “The first time we played West we were a little bit unlucky, and we just never got it going, West played great defense and they definitely deserved to win. But we’ve been getting better and better. Some young players have matured a lot. Everyone’s figured out their roles now. It’s late, but we’re trying to make a run at a good season.”

Makayla Borst is scoring a ton of goals down the stretch. She had six when Carson recently beat Central Cabarrus. She had three more on Tuesday against the Falcons.

“That game against Central, if it could go right for her, it did,” West said. “She was on fire. Everything that came off her foot found the back of the net. She’s a very talented player.”

Hannah Isley, who has a chance to become the leading scorer in school history, scored two goals on Tuesday. Riley Isley and Lexlyth Sotelo got one each.

In the game at West, Carson got down in the first five minutes on a PK and never climbed out of that hole. But Hannah Isley got the Cougars off to a fast start on Tuesday. Carson led 4-1 at the half, and went on from there.

“West has a really good team, so it’s not like we ever felt comfortable, especially early in the second half,” West said. “But it’s nice to have scorers.  This is a more offensive-minded team than some we’ve had.”

Most of Carson’s experience is on the attacking end. There’s a lot of youth in the back.

Carson did not get off to a good start this season for a number of reasons. Key players such as the Isley sisters and freshman Allie Martin arrived late after the basketball run. The Cougars played several games over spring break without key players, and there were the normal growing pains, as the Cougars tried to replace strong 2021 leaders such as Lani Isley.

“It took some time for us to get it together,” West said.

The South Piedmont Conference has the best team in 3A West (Lake Norman Charter), as well as the No. 6 team (Northwest Cabarrus), so the RPI rankings for West Rowan (9-7-1, 5-6-1) and Carson (6-10, 5-7) are better than you might think. They’re both still in the chase for a 3A playoff spot, as the season winds down.

It was a wild game, as most Carson-West games tend to be.

Carson got a homer from Lonna Addison and took a 3-2 lead to the sixth inning, but West got five runs in the sixth. The key blow was a three-run homer by EA Nance after a flurry of singles.

Carson scored three in the bottom of the sixth, but the Falcons held on.

Carmen Freeze pitched the first four innings for West and allowed only one run. Arabelle Shulenberger pitched the last three and got the win.

Allie Burns went 3-for-3 for Carson, while Phoebe Cole had two hits.

Salisbury rolled 11-3 against North Rowan on Tuesday in CCC baseball.

Kaleb Burleyson (winner) and Evan Koontz (save) got the job done on the mound for the Falcons.

Trey Johnson had two hits, including a triple, and scored twice for the Cavaliers. Malakie Harris took the loss.

Simmerson also led the offense wit a double and two runs scored. Jordan King had two hits and knocked in a run.

Lyerly was runner-up, finishing eight shots back of  East Tennessee State’s Remi Chartier, who set a sizzling pace that included a second-round 63.

Competing for the Speedsters Elite track club at the Lenior Rhyne Open, Hannah Foxx  (A.L. Brown)  became the USA No. 1 for high schoolers in the 200 dash with a wind legal time of 23.59 seconds.
That time placed her No. 1 outdoors in North Carolina and No. 6 in the state all-time.
She also ran a PR in the 100 with a wind legal time of 11.84, the fastest time of the year in the state.
Foxx is coached by Tim Dunlap.
Which is the fastest time this year in the State of NC.

Catawba’s 28th Annual Golf Classic is scheduled for Friday, May 13, at Warrior.