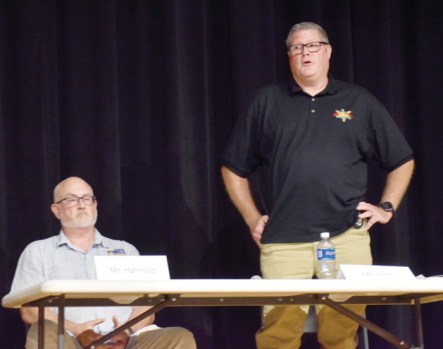 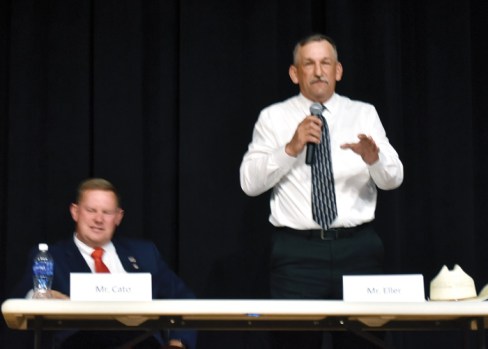 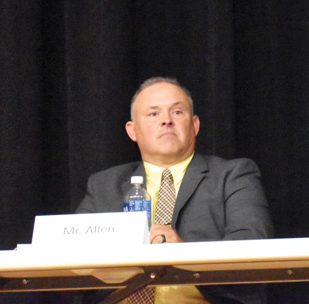 GRANITE QUARRY — The six Republican candidates vying to be the next Rowan County sheriff shared their thoughts about staffing, search warrants and skills needed to do the job in a candidate forum held at East Rowan High School on Monday night.

It was the last in a series of forums highlighting conservative candidates running for a number of local offices hosted by the Rowan Republican Party in advance of the primary. Early voting starts on Thursday and the primary is on May 17.

Before answering questions, each candidate introduced themselves. Travis Allen is a Rowan County Sheriff’s detective and Rowan-Salisbury Schools Board of Education member. Mike Caskey is a police officer in Charlotte and Rowan County commissioner. Tommie Cato is a former highway patrol officer and school resource officer. Jack Eller, the only candidate without law enforcement experience, is a businessman. Capt. Greg Hannold is the Rowan County Detention Center supervisor. Brad Potts is a retired state trooper and school resource officer. Each candidate is seeking the office held by retiring Sheriff Kevin Auten.

There are also two Democrats running for sheriff: former N.C. Highway Patrol trooper Carlton Killian and veteran and former corrections officer Simon Brown. Since they are not Republicans, they did not participate in Monday night’s forum.

Do you feel it is necessary to increase the number of sheriff’s deputies in Rowan County and do you have plans in place to do so?

Every candidate on the stage agreed that the Rowan County Sheriff’s Office is suffering from a staffing shortage, but each candidate offered their own way to remedy the problem.

Cato said the current starting pay rate of about $40,000 will not be enough to stay competitive with other employees. To recruit new officers, he suggested starting by loving and investing in the deputies who currently work for the department who will then recruit other deputies by speaking highly of their work place.

Eller did say he has a plan, but didn’t offer any details. He acknowledged his lack of law enforcement experience and said he’d call former Davidson County Sheriff Gerald Hege with any questions he might have once on the job.

Hannold said the department needs to grow with the increasing call volume. In addition to hiring more deputies, he suggested redirecting resources, pursuing grant funding and shifting deputies to high-crime areas as ways the department can shore up the shortage.

Potts said deputies are “overworked” and the department is “understaffed.” He said he’d document why the department needs more deputies and take that information to the Rowan County Board of Commissioners to request more funding.

Allen pledged to have the office fully staffed in a year and a half by treating people well and by recruiting in Rowan County. He said the department needs to “look in the mirror” to ensure it’s a place where people enjoy working.

Caskey said commissioners have worked with Auten to add 19 new positions over the last nine years, but said the department is still obviously understaffed. Caskey said he’d consider moving deputies around to meet crime demands and would also explore offering overtime pay instead of compensation time when deputies work more than their schedule.

What is your opinion of no-knock search warrants?

A no-knock search is conducted when law enforcement enters a dwelling to execute a warrant without knocking on the door and notifying the person inside.

Potts made it clear he’s in favor of the method, saying “if you knock, they know you’re there.” He went on to say criminals may try to dispose of evidence if given a warning.

Allen, also in favor of the practice, said no-knock should be used for violent and aggressive offenders. Not every search warrant has to be no-knock, he said.

Caskey said he’s in favor of no-knock warrants because they make it safer for people inside because deputies can secure the scene more quickly. He mentioned the county is exploring the possibility of acquiring an armored vehicle for the Sheriff’s Office to use during such maneuvers.

Cato said no-knock warrants should be used rarely and in cases where law enforcement knows the people inside a dwelling have weapons. He mentioned that deputies wear body cameras, which he said should ensure the public knows what happens during those searches.

Hannold is in favor of no-knock warrants in the right circumstance, adding they should be executed after proper planning and preparation is completed.

What, if anything, can be done to provide better access to the legal system?

Allen said the role of the Sheriff’s Office is to be the “enforcement arm” of the justice system. Since the department is the first step in the legal process, Allen said its members must make contact with citizens “not just on bad occasions” but also in casual settings.

Caskey said the sheriff should be in the community and know people in the community, adding that he’s done that as a Rowan County commissioner. He said deputies must “provide good customer service” by getting on people’s level.

Cato said deputies need to be informed about local resources that can help people they interact with. He wants to get deputies more engaged with the community by incentivizing volunteering. For example, Cato said he’d like deputies to coach little league.

Eller said the Sheriff’s Office enforces the law and said he’ll be an accessible sheriff if elected.

While admitting that access to the sheriff can be limited given how many responsibilities the sheriff has, Hannold pledged to be an accessible sheriff if elected. He said he’d always call people back. Hannold also said he’d host a weekly radio show during which he’d engage with the public.

Potts said the job of deputies is to be fact finders who then direct people through the legal system. He said deputies should have a list of resources available to citizens.

What is the key challenge facing the Sheriff’s Office and how would you address it?

Without going into much detail, Eller said the problem at the department is that people have been “running around” for the last 25 to 30 years. He said he’d hold people accountable and hold deputies to a “higher standard,” even when they’re off duty.

The biggest challenge in Hannold’s eyes is that officers who love their jobs aren’t happy to be there because the department is “dangerously low” on manpower. Hannold said the key to addressing that problem is to ensure the public sees deputies as honorable and also offer better pay.

Potts listed two main challenges: communication and morale. Fixing both of those starts at the top, Potts said. He said he would make sure communication between the office and the community is a two-way street. He would improve deputy morale through example.

Like Hannold, Allen pointed to a lack of manpower as the main obstacle, but said the department has some “housekeeping” to take care of to ensure the environment and culture is attractive to deputies. Allen said married deputies who pursue other people will not work for him. Like Eller, Allen said he’ll hold employees accountable for their social lives.

Caskey identified the growth of the county and the recruitment and retention of deputies as the primary challenges. He said he’d like to be on the front lines with his deputies to ensure he knows what they are facing. If elected, Caskey said he’d create a website with clear job requirements so deputies know what they need to do to earn promotions.

Cato said recruiting and retention is a key problem, but he talked mostly about holding deputies more accountable. Cato said he’d like to re-train deputies on how to speak to citizens. Under his watch, Cato said dealing with a deputy would be similar to visiting Chick-fil-A because the service is so good. Cato mentioned enforcing a social media policy for deputies.

Who will be on your leadership team?

Allen was the only candidate who named specific individuals who will be on his leadership team if elected. Allen said he’d name current Sheriff’s Office Lt. Jason Owens to the position of chief deputy and Sgt. Wes Smith to the role of criminal captain. He criticized the other candidates for not specifically saying who would be on their leadership team.

Hannold said there is plenty of talent in the department so he would promote from inside. Later in the forum, Hannold said he didn’t want to make promises to anybody during the campaign.

Potts pledged not to bring any state troopers into leadership positions while saying his team will be comprised of people who have earned their positions.

Caskey said he wouldn’t pick “yes men.” He isn’t opposed to hiring people from outside the department because they may be able to provide “fresh perspective.”

Cato said he has asked people within the department to move into leadership positions if he’s elected, but declined to name them. He said he’d like to keep on a few soon-to-be retiring officers who are in leadership roles to help with the transition.

Eller said his skills as a people person would help him vet candidates. He would decide his leadership team after the election.

What is your plan to foster good relations and effective communication with entities in the county?

Caskey said he’s spent the last nine years as a commissioner working with people in the county who the sheriff would need to work with. He went on to say the “sheriff of the future” will need to be more involved with things like economic development and he’s prepared to do that.

Cato said he’d like to have a monthly or bimonthly meeting with the police chiefs of each municipality and said all of the law enforcement agencies will have to work together to stop crime. He also said it’s important to work with agencies outside of the county like the State Bureau of Investigation.

Eller said he’s a people person who can work with anybody.

Hannold said he’s been working with other entities in Rowan County for a long time and has already established relationships with entities such as Crime Stoppers, the District Attorney’s office and the Terrie Hess House.

In addition to maintaining mutual aid agreements with municipalities, Potts said he’d like to create a citizens advisory board made up of community members to ensure he’s in touch with what’s happening throughout the county.

Allen said his goal as sheriff would be to build relationships with municipalities while allowing deputies to be the “thin blue line” protecting Rowan Countians from the criminal element.

What is the most important skill a sheriff can bring to office?

Cato listed a litany of skills, including truthfulness, loyalty, integrity. He said he’d build the department to be the best in the state.

In Eller’s opinion, leadership is the most important skill a sheriff can bring to the table.

Hannold said the most important skill is decision making because a sheriff makes decisions that impact deputies and the members of the public. Bad decision making, he said, can lead to lawsuits, deputies leaving and the wrong people coming in.

For Potts, it’s “all about communication.” He said the sheriff has to be accessible to the community and pledged to be easy to reach if elected.

Allen said being a good listener is the most important skill. He’d surround himself with the right people to help him do the job, Potts said.

Empathy is the skill a sheriff needs the most, according to Caskey. He said it’s critical for the sheriff to be someone who understands the public, which would lead to better communication.