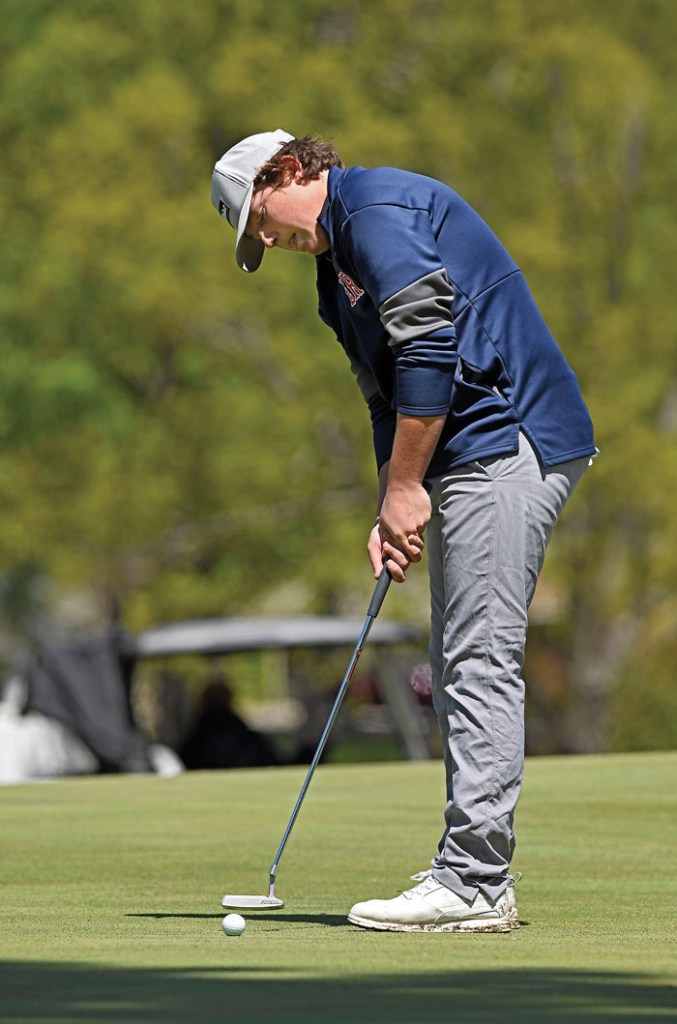 East Rowan’s Jaden Sprinkle shot 74 for medalist honors in the South Piedmont Conference Championships held on Monday at the Country Club of Salisbury.

Sprinkle won in dramatic fashion, with a birdie on the final hole to win by one shot.

East’s Landon Merrell, the Rowan County champion, finished third with a 76. Dalton Heglar’s 93 and Gavin Walker’s 112 were enough to get East fourth place in the tournament at 355.

Northwest Cabarrus shot 320 to edge Lake Norman Charter, which had three players with 79s, by one stroke.

The individual winner for the season was Northwest Cabarrus’ Talan Harrison, who shot 75 for tournament runner-up honors on Monday. Harrison topped Merrell by four shots in the season standings.

Sprinkle tied for fifth for the season. Owen was ninth, Black was 10th, and Cranfield was 11th.

Carson finished fifth in the tournament at 367, but held on to fourth in the season standings.

Lake Norman Charter, Northwest Cabarrus, West Rowan and Carson advanced their teams to the regional, and they’ll be joined by the top individuals from non-qualifying teams such as Sprinkle, Merrell, Black and Central Cabarrus’ Ryan Masterton, who shot 76 on Monday.

Next for SPC golfers is the 3A Midwest Regional, which also will be held at the Country Club of Salisbury.

The Central Carolina Conference Championships will be held at Crescent on Wednesday.

Wood and Ralph Sampson (Virginia), a three-time college player of the year, will speak at Carson at 9 a.m. today. After lunch at The Smoke Pit, Wood, Banks, Henderson and Sampson are all scheduled for East Rowan this afternoon at 1:15 p.m.

Wood and Banks are scheduled for breakfast at Hendrix on Highway 70 on Wednesday and will speak at West Rowan at 9 a.m.  After lunch at China Grove Family House Restaurant, Wood and Henderson will speak at South Rowan at 1:15 p.m.

On Thursday, Wood and former NFL receiver Joe Horn will be at Breakfast Time in Salisbury before speaking at Cabarrus Opportunity at 10 a.m. They’ll go on the Chop House 101 in Kannapolis for lunch, and will speak at A.L. Brown  at 2:15 p.m.

Terrol Kendall made a recent hole-in-one at McCanless.

He was playing with Kris Hokanson, Gilbert Sprinkle, Gene Seaford and Jim Fero as part of the “Quarter Group.”

Great weather led to a great turnout for McCanless Couples golf on Sunday.

In a Captain’s Choice event, the first place team was Robin Bradshaw, Allen Terry and P-Daber.

The second-place team was Camden Snow, Susan Wydner and James and Nancy Demeny.
Wydner had longest putt. Clarence Hobart had closest to the pin.

Michael Childress of Salisbury made his third hole-in-one on Friday and his first one in competition.
The Richmond golfer got the ace in a match against Virginia Commonwealth at Spring Creek.
He aced the 167-yard No. 13 hole with an 8-iron.

DENTON — Salisbury’s girls soccer team played for the first time in 11 days on Monday.
But the Hornets didn’t miss a beat, especially senior Sutton Webb.
Webb scored five goals, tying her season best as the Hornets romped 9-0 over the Wildcats of South Davidson.
Webb has scored 40 goals this season and 122 in her career.
She’s closing in on the county record. South Rowan’s Madison Henry scored 128 from 2017-20.
The Hornets (12-1-2, 7-1-1) are still in second place in the Central Carolina Conference. The tie and the loss in CCC play came against league-leader West Davidson.
Kyan Zaldivar, Parker Jenkins, Sage Huffman  and Audrey Urbina also scored for the Hornets.
It was the first career goal for Urbina.
Sydney Hlavacek and Izzy Banish had two assists each, while Kendall Colwell, Hannah Schmeltzer, Webb, Jenkins and Zaldivar had one,
Schmeltzer and Abigail Perez combined on the shutout in goal.
Stella Koontz and Anyeli Lagos didn’t figure in the scoring, but had exceptional games.
The Hornets have a big one at home on Wednesday at 6 p.m. against a good East Davidson team that is 6-2 in the league.

Catawba graduate Dave Robbins, who earned fame as the long-time coach of Virginia Union’s men’s basketball team, was inducted into the North Carolina Sports Hall of Fame on Friday.

The NCHSAA released the pairings for the dual team state playoffs on Monday.

First-round games are scheduled for Wednesday.

Salisbury is seeded second in 2A and will be at home against 15th-seeded Polk County (11-5).

South Rowan is seeded 12th in 3A and will travel to Winston-Salem to play No. 5 seed Atkins.

Sign-ups for the Rowan County Lady Legion softball team will be held on Sunday, May 1, at  5 p.m. at the East Rowan softball field. This will be for both the Senior and Junior teams. This is a sign-up and meeting only.