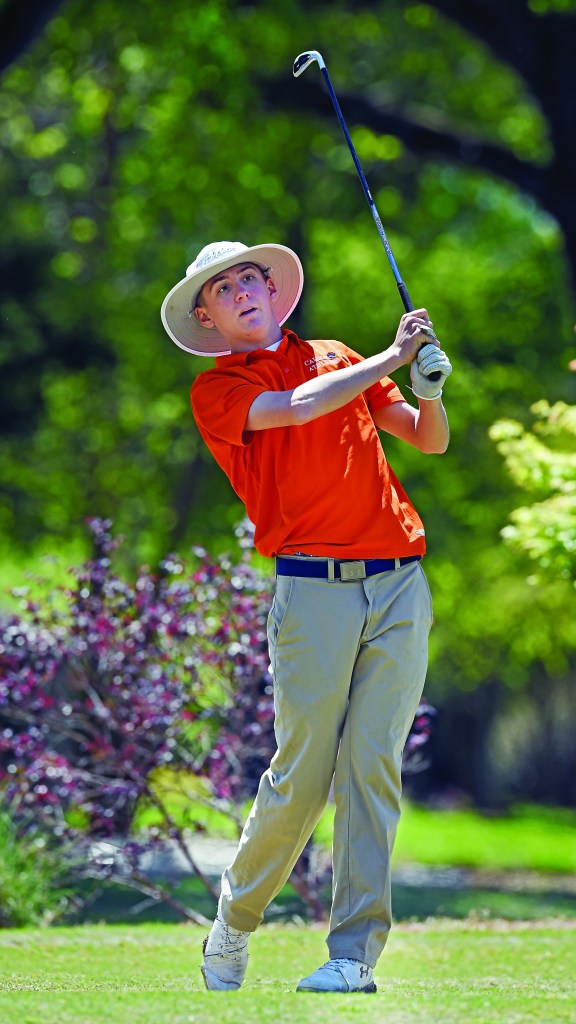 Harrison McCall from Carson teeing off on No. 6, photo by Wayne Hinshaw, for the Salisbury Post.

There’s an unusual amount of high school sports action today, especially for a Monday, with several spring sports reaching their marquee postseason events and with big baseball games being moved up from Tuesday to today.

In golf, the 18-hole South Piedmont Conference Championships are being conducted today at the Country Club of Salisbury, a perfect neutral site that isn’t the home course for any of the league’s teams. West Rowan is the official host of the event. Lake Norman Charter and Northwest Cabarrus have some special golfers.

West has the best chance of the Rowan teams to compete in the team championship battle, while East Rowan sophomore Landon Merrell and West senior McGwire Owen have the best chance to be at the top of the leaderboard among the individuals.

The Central Carolina Conference Championships are set for  The Revival at the Cresecent on Wednesday.

South Rowan and West Rowan and East Rowan at Northwest Cabarrus, two huge SPC baseball games, were moved up to tonight. South and East are tied for first place with 11-1 records. This is the final week of the regular season.

South is set to host the semifinals and championship of the SPC Tournament next week.

Salisbury has scheduled a non-conference game at North Hills for today. Salisbury and North Rowan are scheduled to play each other in Central Carolina Conference games on Tuesday and Friday.

In tennis, the South Piedmont Conference Tournament, which is used as a qualifier for the 3A Midwest Regional, gets rolling at Concord’s Les Myers Park today.

Six singles players and six doubles teams will advance from the tournament to the regional. Lake Norman Charter has the strongest team, but South Rowan and East Rowan also turned in excellent seasons.

Salisbury already has qualified five players —  Will Koontz in singles, plus two doubles teams — for the 2A Midwest Regional.

Also in tennis, brackets for the dual team state playoffs are due to be released by the NCHSAA today, with first-round action set for Wednesday.

Besides all of that, there are games scheduled today in CCC soccer and softball.

As far as track and field, the next major events will be the CCC Championships on May 2 at South Davidson and the SPC Championships at East Rowan on May 4.

High school softball: West salutes past, looks ahead to…