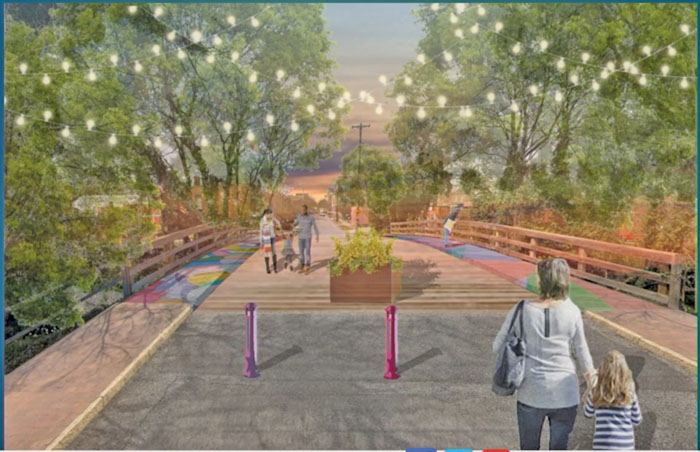 The historic wooden bridge on East Fisher Street may be transformed into a pedestrian-only option. City of Salisbury rendering

SALISBURY —  After the discovery of additional repairs needed to maintain the integrity of a wooden bridge on East Fisher Street, city staff have formed a task force and are conducting additional studies to consider other uses for the historic bridge.

The wooden bridge next to Noble and Kelsey Funeral Home at 223 East Fisher St. has been closed since September, when the  North Carolina Department of Transportation began making repairs to bring the bridge up to national standards. In February 2021, council members awarded a contract to NCDOT to make repairs to the bridge on East Fisher as well as one on North Ellis. The two city-maintained bridges are located above the railroad within the historic district just east of downtown Salisbury’s commercial section. The estimated cost for both projects was $185,758 with another $122,242 designated for additional materials and inspections. The total cost of both projects was allocated from the 2020-21 fiscal year budget fund balance since there is no state or federal match for the project.

The project was for improvements to the bent footing and timber pile, which act as support for the East Fisher Street bridge, as well as the steel beams and timber floor and sidewalk. Similar improvements have been made for the North Ellis bridge and were completed a few months ago. But since inspections are conducted every two years, Public Works Assistant Director Chris Tester said another round of improvements are already needed at the North Ellis bridge.

“It’s just a continuous cycle on these older bridges that you are continuously making repairs,” Tester said. “It’s basically a beefed up wooden deck on the back of your house. That’s how these are built.”

For these historic bridge repairs, Public Works staff obtain permits and right-of-entry agreements from the North Carolina Railroad. NCDOT bridge maintenance staff in Rowan County are then contracted to make the repairs. But during the most recent round of repairs, Tester said crews discovered significant deterioration on the steel I-beams that support the East Fisher Street bridge. That deterioration was not part of the initial inspection that outlined what repairs were needed.

Now, the bridge can only support four tons of vehicular traffic.

The bridge has remained closed, and in the meantime, a task force that includes members of Downtown Salisbury Inc. and the public works, engineering, planning and communications departments are working on a plan of action. Additionally, engineering staff are working on a traffic study that will help determine the anticipated traffic levels of the bridges on Bank and Innes streets, which would serve as alternatives for crossing if the East Fisher bridge can no longer accommodate vehicles.

One option is to spend at least $900,000 to reconstruct the bridge and bring it up to necessary standards that will support vehicular traffic. But that will require raising the height of the bridge by at least 10 feet to meet railroad standards. Additional extensions would be needed, which would then breach adjacent properties. So, Tester said it may not be a logical decision due to the impact it will have on neighbors.

A request to be included in the 2022-23 budget proposal is the replacement and repair of the steel I-beams, but that will take up to two years as staff must obtain right-of-entry points from the railroad before work can begin.

Another option is converting the bridge to pedestrian use, which would maintain the historic integrity while providing safe passage into downtown. A pedestrian bridge would also ensure heavier vehicles aren’t crossing the bridge, which was hard to enforce before it was closed.

In the meantime, task force members have made contact with neighboring property owners to address concerns and gather feedback. Tester said city staff have removed a hump and reconfigured Noble and Kelsey’s Lee Street driveway so that its vehicles are no longer dragging on the pavement. Eventually, the task force will begin public engagement sessions to explore any other potential options for the future of the bridge.

Tester said city staff have to salt the bridge frequently and that weather has expedited deterioration. Making it a pedestrian bridge, however, could potentially extend its lifespan.

Tester said these historic bridges were constructed to accommodate “horse and buggy” passage.

Sada Stewart Troutman, Downtown Salisbury Inc.  director and former executive director of the Historic Salisbury Foundation, told the Post earlier that by looking at Sanborn Fire Insurance Maps and 1860s Civil War Prison Camp drawings, it’s evident there has been some form of bridge presence over the tracks on Innes and Fisher streets since the mid- to late-1800s, likely when the railroad came through in the 1850s. Sanborn maps are detailed depictions of U.S. cities and towns in the 19th and 20th centuries.

This update was detailed to the Salisbury City Council at the April 19 meeting. Planning Director Hannah Jacobson said the task force will provide additional information to the City Council as it’s gathered.

A marathon to be remembered forever