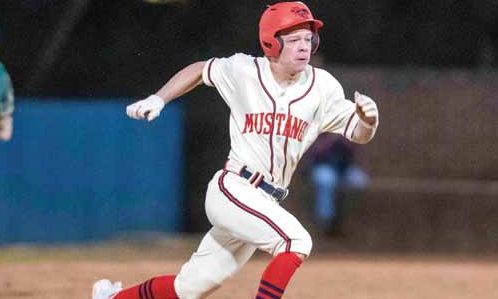 It was sophomore reliever Logan Dyer who secured a 7-4 SPC victory at West Rowan that kept the Mustangs tied for the conference lead. The right-hander delivered 2 1/3 innings of scoreless and hitless relief, helping East improve to 11-1 in league play with just next week’s two-game set against Northwest Cabarrus remaining.

“Logan was clutch out of the pen for us,” winning coach Brett Hatley said after East (19-3 overall) won for the fifth time in its last six games and kept pace with South Rowan (also 11-1) in the league standings. “We like to go to him when the game is on the line. He’s our go-to guy in the late innings and tonight he was a bulldog.”

Dyer, who generates more than enough power out of his 5-foot-9, 130-pound frame, has yet to allow an earned run in 19.1 innings this season. He worked his way in and out of trouble against third-place West (13-7, 8-4) in the fifth, sixth and seventh innings.

“The big thing is we won,” Dyer said after earning his second save. “All I was trying to do was get us out of jams. I didn’t want to walk anybody or make it easy for anybody. Just throw strikes.”

Dyer was the third pitcher Hatley paraded to the mound, following starter and winner Chance Mako and fifth-inning stop-gap Nate Hayworth. Unbeaten Mako worked four-plus innings and took a 5-1 lead into the fifth before faltering. He allowed three runs on three hits and unleashed three wild pitches — yet persevered to win his sixth game. Hayworth relieved with two baserunners aboard and none out in the fifth and quickly induced a groundout that advanced both runners to scoring position. With two away, West’s Zander Burton sliced a two-run single into left field to make it 5-3. Junior catcher Matthew Connolly chased Hayworth when he punched a double into the gap in left-center, trimming East’s lead to one.

“We made it a game,” eighth-year Falcons’ coach Seth Graham said after West lost its third straight. “We just made too many mistakes early and that’s been our weakness all year. Every once in a while we just don’t play good defense.”

West made costly errors in the first, second and sixth innings, helping East score four unearned runs. The loss went to senior right-hander Jake Blevins, who yielded three earned runs and six hits in 3 2/3 innings. “He couldn’t really locate the ball,” said East first-baseman Morgan Padgett. “He was up and in and away all night. But he did have a good curveball that you had to wait on.”

Facing Burton in relief in the top of the sixth, East ensured its victory by scoring a pair of unearned runs. Cobb Hightower opened the inning with his second hit and moved to second base on Cam Padgett’s sac bunt. There were runners at second and third with two men out when Hightower raced home on a wild pitch. Morgan Padgett followed with a flare single into right field that plated Griffin Warden with the game’s final run.

“West Rowan is not going to give up,” Padgett said after collecting three hits and reaching base four times. “You can never sit back against them. You have to keep competing.”

Apparently, Dyer got the same memo. Aided by an infield error, West loaded the bases with two outs in the last of the sixth inning. Dyer escaped when he struck out Luke Graham, a .447 hitter entering play.

In the seventh, a pair of throwing errors helped West put runners on the corners with two away and brought the potential tying run to the plate. Dyer ended it by finding another gear and firing a third strike past WR’s Peyton Summerall.

“(Dyer) did a good job,” Graham said afterward. “The momentum had shifted a little bit, but he came in and stopped it.”

“He keeps coming up big for us,” Padgett concluded. “He comes in in key situations and dominates.”

NOTES: Each of East’s seven runs was scored with two outs. … Padgett (3-for-3, 2 RBIs) gave East a 2-0 lead in the first inning when he blooped a run-scoring single in shallow right field. He leads the team with 22 RBIs. … Warden’s two-run double put the Mustangs up, 4-0. Aiden Schenck’s second RBI of the game came on a lazy flyball single to left and made it 5-1 in the top of the fourth. … Mako struck out seven batters and walked four. Dyer fanned four and issued one free pass. He also doubled in the seventh. … West finished with five hits. The Falcons host South Rowan on Tuesday. East visits Northwest Cabarrus the same day, weather permitting. … In a scene reminiscent of Roy Hobbs in The Natural. West’s Summerall fouled off a seventh-inning pitch that knocked out a bulb on one of the field’s light towers.