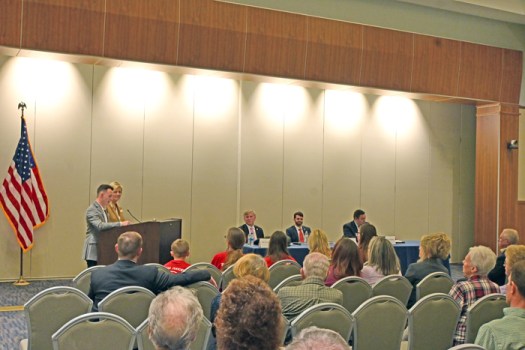 Natalie Anderson/Salisbury Post — Republican candidates vying for N.C. House District 83 in the primary election gathered for a forum to discuss education, law enforcement, broadband and other issues in Kannapolis Thursday. 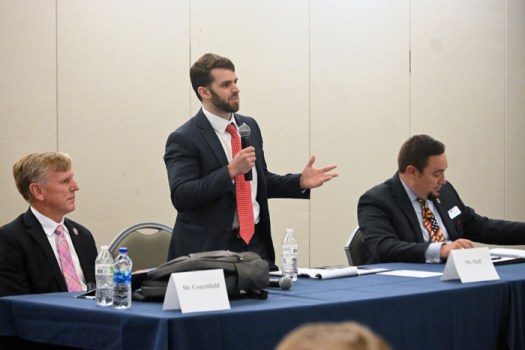 Natalie Anderson/Salisbury Post — Grayson Haff addresses a crowd alongside fellow Republican candidiates Kevin Crutchfield (left) and Brad Jenkins (right) who are vying for N.C. House District 83 in the primary election. The candidates gathered for a forum to discuss education, law enforcement, broadband and other issues in Kannapolis Thursday. 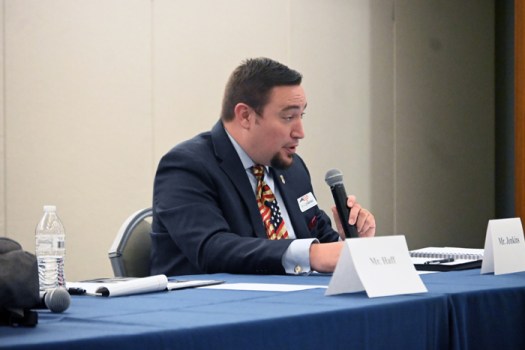 Natalie Anderson/Salisbury Post — Brad Jenkins addresses a crowd during a candidate forum held for N.C. House District 83 ahead of the primary election. Republicans gathered for a forum to discuss education, law enforcement, broadband and other issues in Kannapolis Thursday. 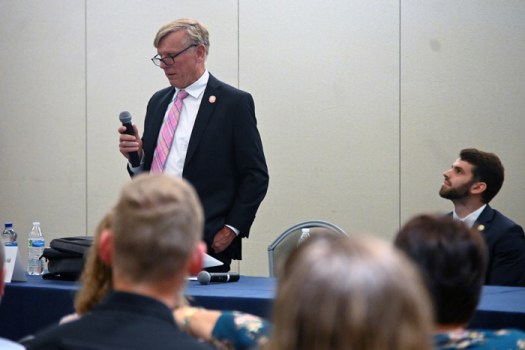 Candidates were asked what issue is most pressing for public education other than critical race theory — a framework used for teaching about systemic racism and how it has shaped attitudes and institutions. It’s become a flashpoint mobilizing Republicans in the 2022 elections. Haff emphasized the need to provide and promote multiple options for students upon graduation, including better paths for a trade profession or pursuit of an academic degree, which can be done by increasing partnerships with high schools and community colleges. Haff also said charter schools and school choice should be supported since that allows parents more control over what their children are being taught and saves the state money.

Crutchfield said more than 10% of the state’s budget is funneled to state universities despite some having an average graduation rate of less than 50%. He said it’s a shame students can take out hundreds of thousands of dollars to attend school but can’t borrow $10,000 to begin their own business. So, he calls for a re-evaluation of the value such degrees hold for students once entering the workforce.

Jenkins called for breaking “the liberal backbone of the liberal agenda” and fighting to recapture academia, an area he said Republicans have lost to Democrats. He said schools are no longer educating but “indoctrinating and grooming” students, and that leaders have failed students by convincing them only higher education can provide a successful path and not trade schools.

Candidates were also asked about transgender athletes participating in sports at publicly funded schools. A transgender person is someone whose gender identity is different from the sex they were assigned at birth. Crutchfield referenced his own daughters, adding that he’d be “appalled” at the idea of boys competing with girls and vice versa. Jenkins said he is “completely, fully and entirely” against the idea of transgenderism despite what the culture today allows. He said certain lines can’t be crossed and vowed to “run a bill on day one like my friends in Florida did.”

Haff said there is a man and a woman and nothing else and that boys shouldn’t be allowed to compete with girls in sports.

Much of District 83 is rural, so candidates weighed in on the need to broaden internet access for many who don’t have the same options as those closer to urban centers. Jenkins said policy makers can work with local government to build the infrastructure needed, adding that rural students are at a disadvantage without it.

Crutchfield said leaders should keep local governments informed of the various resources and funding dedicated to building that infrastructure. He added that leaders should want students to have the same access to education across the state.

In addition to policy-making alongside local government, Haff said more public-private partnerships can increase access. He said a lot of businesses are moving to remote operations and many are leaving cities to “live in the beautiful rural land we have here.”

Jenkins said he’s served as chaplain for law enforcement and has experience notifying next-of-kin, so he knows what officers need. He said they’re not adequately trained or equipped to deal with mental health-related calls and that any officer will say it’s an added burden to what they do despite doing the best they can.

Jenkins added that mental health issues are on the rise and they stem from social media and from teaching children at a young age to hate each other for their skin color. So, while supporting officers can be an answer at the state level, this also requires a closer look at overall mental health problems, he said.

Crutchfield said officers face upwards of 100 more traumatic events than the average person and that they should be granted workers compensation for post-traumatic stress disorders. He also called for legislation to increase penalties for rioting and looting.

Additionally, candidates were asked whether they support the funding of Narcan for law enforcement officials, a medicine that can be used to reverse potentially fatal drug overdoses. Jenkins said the bigger debate should be how to prevent people from “getting hooked on drugs” in the first place.

Crutchfield said anyone with a child going through such a situation would want officers to do anything they can to help. But he questioned why diabetes medication and EpiPens used for allergic reactions can’t also be funded. He also said thousands of drug traffickers roam the Salisbury, Concord and Charlotte areas, so the courts need more funding and support to prosecute those people to get drugs off the street.

Haff said there should be more focus and education placed on preventative measures and rehabilitation efforts. He added that media pushes a narrative against law enforcement, which leads to riots and looting because of what’s seen on the news. Haff called for efforts to dissuade criminality in general.

Candidates spoke about whether they support telemedicine and how it should be addressed. Crutchfield related the issue to broadband access and emphasized the added need for such access due to the COVID-19 pandemic. He added that telemedicine can cut health care costs, but he’s concerned with physicians who have far less experience serving patients via telemedicine.

Haff said it’s particularly needed for rural areas where resources are already limited. He said with the potential expansion of Medicaid, the state may see increased wait times and emergency room visits, so telemedicine may be a better option for those who seek care for non-emergencies. Haff also said careers in health care should be further promoted due to an ongoing shortage of such professionals.

Jenkins said the doctor and patient should decide what’s best for the care and services needed. He said a “knee-jerk reaction” among political leaders to expand telemedicine means government would be getting involved in an issue that may negatively impact patients.

Haff said almost 80% of annual transportation funding is dedicated to maintaining roads, with about 75% of roads maintained by the state. He said elected leaders should work with regional transportation planning organizations and capital infrastructure plans to prioritize highway funding needs. Haff called for more focus on how roads are being built, how they affect economic development and the surrounding communities.

Jenkins called for more oversight for the North Carolina Department of Transportation, which has been in financial trouble according to audits in recent years. He asked why funding is being “foolishly used” and called for the cutting of red tape to more effectively build roads without making negative impacts to the community.

Crutchfield said a lot of state funding ends up being used for Charlotte’s airport, which takes away taxpayer funds from rural areas like those in District 83. He said he’s against funding for public transportation because rural communities don’t see any of it.

The final forum sponsored by Rowan Republicans will be for the Rowan County Sheriff’s race on Monday at 6:30 p.m. It will be held at East Rowan High School Auditorium, 175 St. Luke’s Church Road.