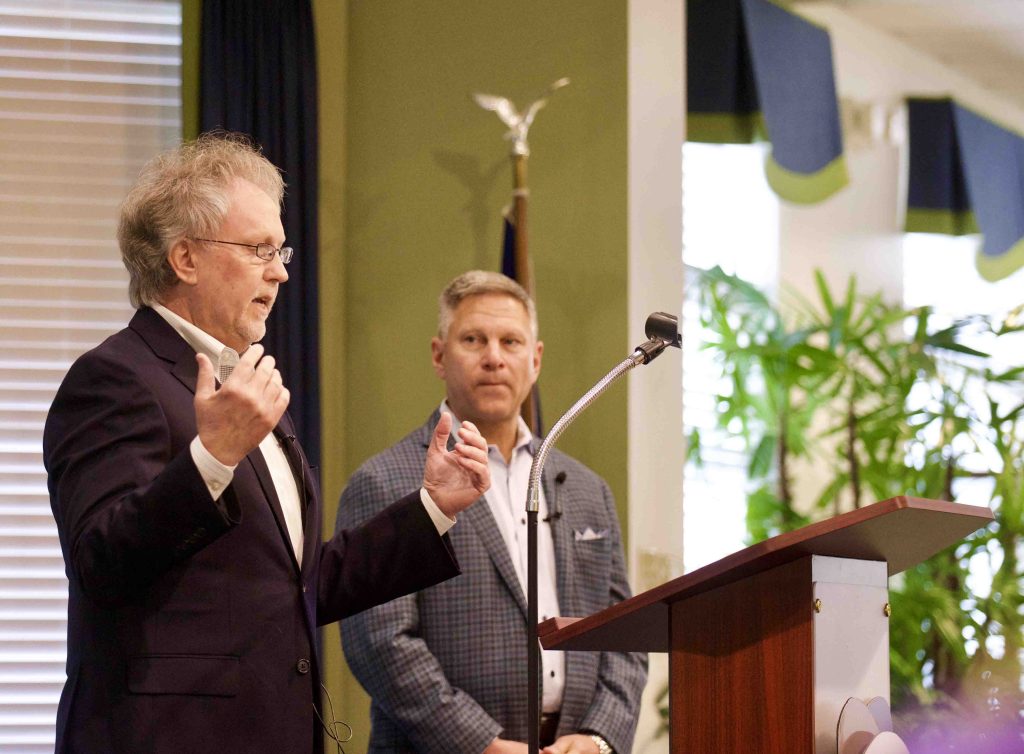 SALISBURY – Chamber of Commerce members gathered at Trinity Oaks on Thursday morning to hear from two local medical practice officials about what it takes to have a healthy team.

“We could not wait to be here,” Norris told the crowd. “We are like little kids at Christmas. We’ve been talking about this for months and months, and we are so passionate about what we are going to share with you.”

Norris said his goal was to look at the other side of the “Great Resignation” and focus on employees who stayed the course, but come to work every day reluctantly and exhausted in every way.

Norris pointed to statistics that say most employees felt at least one instance of burnout in 2021.

“These are people, these are employees,” Norris said. “These are the people who come to work for us.”

Norris said he decided to look at what COVID-19 did for the company, rather than to it.

“That was the mindset our company was able to adopt in 2020,” Norris said. “This was a catastrophic phenomenon that had not struck us in 102 years.”

Loeblein asked the crowd what makes a team function at a high level. He pointed to the example of Chick-Fil-A studying its own business to determine why it is successful at attracting and keeping employees. Norris said the company found employees want a better boss, a bigger vision and a brighter future.

“These are great terms that we use that fit wonderfully into building a healthy organization,” Loeblein said.

His biggest piece of advice: “Don’t be a jerk.”

“That one thing alone would solve a lot of problems in a lot of companies,” Loeblein said.

He said bosses need to give employees affirmation for jobs well done because many people are craving such affirmation.

He said people want to be part of something bigger than themselves.

“Your ‘why’ better be crystal clear,” Loeblein said.

Norris pointed to research on why people join gangs and the data shows criminal organizations fulfill social needs for their members, who seek the feeling of belonging to something bigger than themselves.

He recounted the story of a federal agent who was embedded in an outlaw biker gang and the care he saw and experienced between hardened criminals that was greater than his government colleagues.

Norris said core values should represent the very basics of what is expected of people working for a company. He read off his company’s own values and said they are used for everything from hiring to evaluating employees and the rare case of firing someone.

Norris had some advice on how to develop core values for any organization.

“Identify two or three individuals in your firm, your organization, who, if they left today, it would make you cry,” Norris said.

Then he said you need to identify why those employees are so important and note them as core values. “You have to be aggressively authentic with these core values,” Norris said.

He said every organization has a culture that is made up of a mix of traditions, what is rewarded, reasons for hiring and firing someone and how to assess the culture of clients, good or bad.

On the point of a brighter future, Loeblein said there is a scientific way to get people in the right role in an organization with an assessment he first learned about while working with a dental office. He said a dentist told him about the assessment that showed he needed to move two people in the practice to different roles, and they became two of the best employees.

“What we want to do to allow our employees to grow is to put them in the right seats,” Loeblein said.